Home Uncategorized Why I Hate Brunch 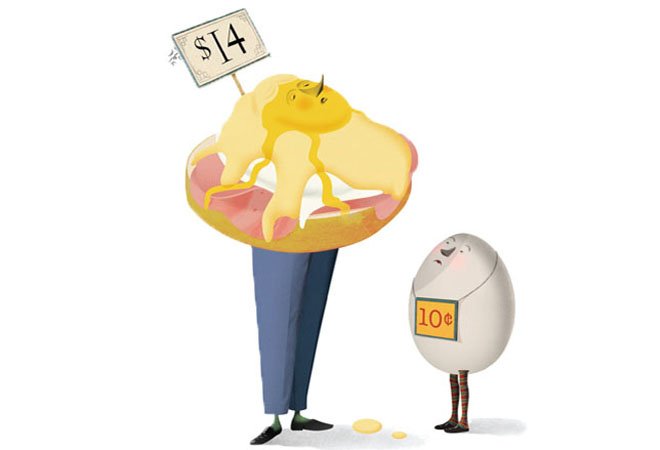 Brunch is for people who want to pretend they care about food—for the twentysomethings Instagramming their latte foam with their Hello Kitty-cased Samsung Phablet. It’s most important to old people, fussy hotels, gospel singers, Mother’s Day celebrators, and all of Dubai—not to serious foodies. Or drinkers. I’ve seen many a weekend menu feature bottomless mimosas, Bellinis, and Bloody Marys but have never seen anyone order a 1985 Montrachet with their eggs Benedict. Brunch is breakfast for functioning alcoholics. It is the main reason anyone ever ate on camera in six years of Sex and the City.

Though it’s just one course, brunch takes as long as a dinner at Providence. And boasts as many calories. Yet while it’s going to be the main meal you eat today, you are nevertheless forced to make a    Sophie’s choice between entrée and dessert. BLD’s braised pork hash or ricotta blueberry pancakes? Canelé’s leek, bacon, and egg sandwich or swollen french toast?

You know who cooks brunch? Not usually the chef. Not often the sous-chef. It’s probably the guy the chef and sous-chef are psyched about not having in the kitchen with them on Sunday night. But few restaurants can refuse your request to turn a 10¢ egg into a $14 egg. The cruelest thing about the recession is that it didn’t kill brunch. In fact, it made it stronger.

I say forget it. You can learn how to cook an egg. You can’t learn to not listen to those mimosa drinkers talking about their Match.com dates.