Home Uncategorized Who You Calling Homie? 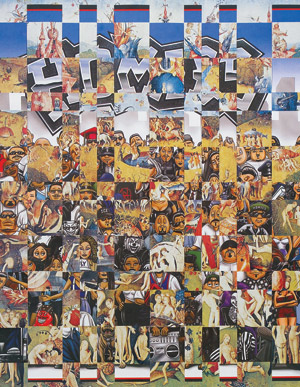 This year has revealed the unexpected pleasures of generational warfare. We have Barack Obama to thank for most of, well, all of it: First he mixed it up with Reverend Wright, then Jesse Jackson, then… You know it’s a topsy-turvy season when Al Sharpton sounds like a voice of reason. Who will step forward next to protest some perceived lack of respect from Obama? Nelson Mandela? Bill Cosby?

What’s striking about the season’s battle between oldsters and heirs is how public it has been. Most times when generations contend, the wise old fighter keeps the static off mic, since the kids tend to hold the stronger hand—they’re going to be around longer. Publicly it’s better to convey an orderly flow or agree to disagree. On the surface, a mundane passing of the torch is on display at the Los Angeles County Museum of Art with two concurrent shows: Los Angelenos/Chicano Painters of L.A.: Selections from the Cheech Marin Collection (through November 2) and Phantom Sightings: Art After the Chicano Movement (through September 1). Los Angelenos presents painters largely from the ’60s and ’70s who were breaking new ground—demanding that mainstream institutions (like the county museum) give them their due while simultaneously bonding with a fledgling Chicano political movement that was challenging mainstream institutions. Then, just a few years down the avenue, comes Phantom Sightings, showcasing a bunch of conceptualists and performance artists—kids with a media-savvy sense of irony about making it big—as they express a playful yet pointed irreverence toward their elders. Somehow, putting these shows together under the marble gaze of a museum makes the passage seem calm and dutiful. But trust your eyes: The evidence beneath the surface at LACMA suggests somebody’s getting burned when the torch gets passed.

Establishing a positive-minded brown-skinned nation was hard work, and Los Angelenos shows that the artists who were trying to paint identity into existence took their job seriously. A few decades later, however, the kids are taking the old-timers to task with as much heat and as many hurt feelings as any off-mic remark can have. The painters want to celebrate a solemn self-image; the newcomers want to question what is a Chicano, and who owns the title. The painters are comfortable with agitprop, the better to project a sharp, simple message; the newcomers prefer ambiguities and politics that are more elliptical. The veterans celebrate heroes; the kids mock and question authority. One generation had to will a movement into life; it gave the next generation the luxury of getting snarky about movement politics and pieties.

You walk into Los Angelenos past sky-high swaths of old-school Eastside graffiti that spell out the show’s title. Right inside are paintings by Charles “Chaz” Bojórquez that make connections between graffiti and calligraphy and oils. This was once bracing stuff. Graffiti, though, has frequently been shown in galleries and museums—often to the detriment of the form’s snap—and whatever shock value it once had in this context is long dissipated. By launching the exhibit with Bojórquez’s work, the museum has indicated that Los Angelenos is about nostalgic community building rather than new conversations.

Crowd pleasing is baked right into the show’s reason for being. As a sampler of works from the collection of actor Cheech Marin, the exhibit demonstrates that it has showbiz go-along, get-along on its mind. That’s part of the problem. There’s a gently surreal portrait by Eloy Torrez of Marin as the grand patron wearing a necklace and a crown. Should a collector, as the Los Angeles Times’s Christopher Knight has asked, be invited to do the work of a curator? Should a publicly funded museum allow a private collector to showcase his goods and thus raise the price of his collection? Oh, wait, it  already did that.

There is great work at the Marin show—great work that has already been seen at the county museum and all over the country. Back in 1974, the paintings of Los Four—a pioneering group of Eastside artists—were the first Chicano art to be displayed at
LACMA or at any mainstream museum. A smattering of their pieces forms the backbone of this show. Carlos Almaraz’s series depicting flaming car crashes and Gilbert “Magu” Luján’s misleadingly offhand Blue Dog paintings deserve repeat viewings. Yet there is plenty in Los Angelenos that shouldn’t be on the walls of the county museum.

Even the Phantom Sightings title—the part about “Art After the Chicano Movement”—deftly sticks it to Los Angelenos. Although the exhibits share a few artists, the sensibility is radically different. Phantom Sightings holds the idea of what it means to be Chicano up for interrogation and seems to say there is no movement today, no single answer on who a Chicano artist is. That, the art suggests, is a good thing. This is work from the post-politically correct era, work that makes you wonder which side you belong on, work that lives in an echo of competing definitions. It accepts that pop culture, government, and folklore generate descriptions of Latino life, and that on some level are equal or equally worth critiquing. The Minuteman Project, the Virgin of Guadalupe, lowriders, and heck, Cheech Marin all speak to identity, and thus are worthy subjects for the Phantom Sightings artists.

If the Marin show is informed by the earnest aesthetic of Mexican muralists—an unalloyed faith in big sweeping truths—Phantom Sightings tosses a pot of paint at those murals. Nobody bridges this generational divide better than Patssi Valdez—one of the few artists represented in both shows. In 1974, the year Los Four broke institutional barriers, she famously had herself taped to the side of a Whittier Boulevard wall; she was declaring—along with the other members of the group Asco—that the traditional mural, and the stability of its meaning, was up for grabs. Phantom Sightings documents the actions of Asco, which are by turns playful, political, and fashion conscious. Steeped in the ironies of ’70s SoCal punk rock, Asco lived in the moment, and once that moment was over it was never going to be repeated. Which is to say, the group wanted in, even when it wasn’t certain whether what was inside was all that.

Adrian Esparza, an El Paso-based artist, sums up the approach shared by many of the post-movement artists. Taking cast-off objects—old posters, T-shirts, advertisements—he assembles quiltlike objects that refuse to come together in a monolithic vision. In Barrio of Earthly Delights, two sets of images—a cartoony collection of Chicano “homies” by artist David Gonzales and a Bosch painting—interact, argue, and fail to congeal; unity is impossible. It’s life as a tripe stew that won’t taste the same tomorrow. Some of the strongest work in the show is by Julio Cesar Morales, a Tijuana-born artist living in San Francisco whose series Undocumented Interventions diagrams in a pamphlet drawing style creative ways in which immigrants have smuggled themselves across the border. If customizing cars is a heralded Chicano tradition, Morales illustrates one of its less-heralded expressions. Here we see images of border crossers folded into car seats, a little girl curled up inside a Powerpuff Girl piñata. The figures look asleep or dead: They are secrets nesting in mundane objects that just might live to transform the world they seek to inhabit.

Both shows are on view as the news sinks in that the Archdiocese of Los Angeles is selling the building that houses Self-Help Graphics, the longtime Eastside arts space. In the’70s, Self-Help Graphics supported Los Four and later nurtured a number of the artists featured in Phantom Sightings. Generations sometimes rumble, but they come together, too, when something sacred is taken away. You can see two generations bumping into each other like tectonic plates for a couple weeks more at LACMA, and the sound and heat speak volumes. » Los Angeles County Museum of Art, 5905 Wilshire Blvd., 323-857-6000  Map