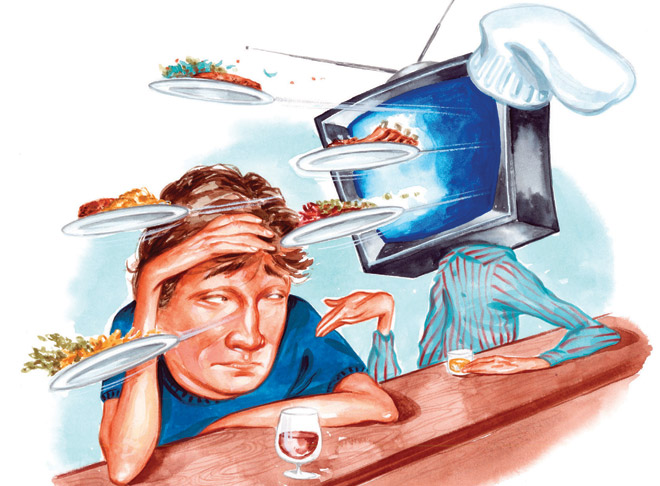 So this keeps happening: I’m at a party and I’m excited to meet someone who seems incredibly knowledgeable about food. He’s name-dropping chefs I’ve never heard of, remembering their dishes in great detail. These are chefs from all over the country, in weird non-food cities like Milwaukee, Denver, St. Louis, and West Hollywood. How many food blogs is this guy reading, anyway? Is that last chef he mentioned the sous-chef at Alinea? Or one of those Le Fooding guys I should know about? “No, dude, he’s the guy who stole the pea puree from Ed in the seventh season, remember?”

I have once again been sucked into a foodie conversation with a Top Chef  fan. I wasted 15 minutes conversing with someone about second-rate food that they are evaluating secondhand. They know as much about that pea puree as I do about Wayne Thiebaud’s cakes.

It’s a good show. I’ve eaten at several restaurants run by Top Chef alumni, like season 3 contestant Brian Malarkey’s Searsucker in San Diego, that are fantastic. But most of those chefs aren’t great or innovative. Reality television should not be looked upon as a guide to great cooking. Yet I have to read all about the Top Chef contestants in Food & Wine and see countdowns to restaurants they’re opening on food blogs.

I don’t know much about music, so I don’t chat with the guys behind the counter at Amoeba about deep cuts from Taylor Hicks albums. I buy clothes every six years, but I’m well aware that America’s Next Top Model isn’t actually America’s next top model. When you talk about restaurants and know more about Top Chef: Chicago’s Dale Talde than about Thomas Keller, it’s as if you have walked into a Russian Olympic wrestling training facility and started describing the awesome folding-chair slams by Rowdy Roddy Piper.