Home Health That Huge Hospital Ship Docked at the Port of L.A. Has Treated... 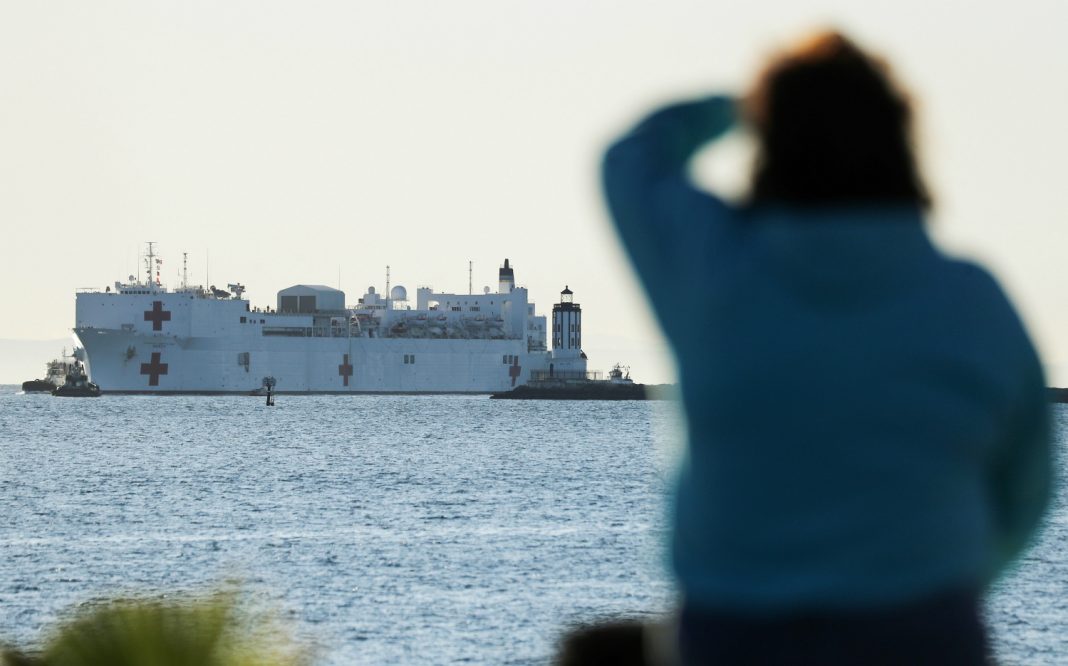 Although the USNS Mercy has 1,000 beds and a crew of 800, making it the largest hospital in L.A., only 15 patients have boarded it since it anchored here last Friday to take pressure off overburdened local hospitals by caring for COVID-negative patients.

At a Department of Defense press conference Thursday, the Mercy’s commanding officer, Captain John R. Rotruck, told reporters via phone that the hospital has only actually been active for four days, and that the disparity between the ship’s seeming rush to get here and its minuscule intake was by design.

Pointing out that five of the 15 patients have already been discharged, Rotruck said, “I think the take-home message there is that we are actually able to bring patients aboard and also to discharge them effectively to generate that patient throughput so we can continue to effectively act as a relief valve for the local hospitals. If we were not able to discharge patients effectively we would essentially fill up and then no longer be of any use.”

When a reporter said that Mercy’s overnight arrival from San Francisco with so few people being treated thus far could look to some like political grandstanding by Governor Gavin Newsom, Captain Rotruck countered that his D.o.D. bosses “wanted to get the capability and capacity in place early, before the hospitals in the local area were already overwhelmed, so we could establish some relationships and make sure the processes were sound to get the patients to the ship, so that when the capacity demand really increases, we’ll be ready.”

It’s the responsibility of local hospitals to refer patients to the Mercy through an already existing county medical alert system, Rotruck said, adding, “We’re here in support of FEMA and the state of California, so we’re ready to answer whatever that demand signal is. If that demand signal ramps up, we’ll certainly be ready to accommodate that.”

Also up to land-based hospitals is testing patients fro COVID-19, since the Mercy will not take on anyone who doesn’t test negative for the infection.

“We are not performing that test here,” Rotruck said. “The local referring hospital is actually screening and testing the patient before they are transferred.”

Asked if the patients who’ve come aboard so far include gunshot victims and people with broken legs, Rotruck replied, “Yes and yes to all of that. It’s people who been in traumatic accidents who are now recovering, people who have gastrointestinal, heart and lung problems. So pretty much the gambit of patients you would expect to see in a community hospital.”

Should the time ever come that the Mercy is told to take on pandemic victims, Captain Rotruck said his crew would be ready: “If FEMA, in coordination with the state of California, decides that our mission should change, that we should start accepting COVID patients, then we will take action on that.”

RELATED: The Biggest Hospital in the City Just Docked at the Port of L.A.

Truckers’ Protest Grinds Commerce to a Halt at Port of Oakland