Five years ago, most Marvel fans generally regarded Thor: The Dark World as the weak link in the ongoing Marvel franchise of blockbusters. But in 2017, director Taika Waititi breathed new life into both the franchise and the character with Thor: Ragnarok. Unfortunately, the filmmaker’s manic tendencies get the best of him with Thor: Love and Thunder, a giant mess from beginning to end despite a bravura turn from Christian Bale as villain Gorr the God Butcher.

The latest Marvel monstrosity follows its Phase 4 siblings, Eternals and Doctor Strange in the Multiverse of Madness, and this Thor movie also suffers from clashing tones. And while Waititi displayed an impressive ability to juggle comedy and tragedy in his Oscar winner, Jojo Rabbit, the balance he struck there proves elusive this time around; this sequel is just pretty goofy.

Love and Thunder finds Thor (Chris Hemsworth) questioning his purpose in the universe. Most people his “age” are married with children, but Thor is single and childless. He was raised to be the King of Asgard but he ultimately rejected that cushy gig and put Valkyrie (Tessa Thompson) in charge so he could hang with the Guardians of the Galaxy gang. But who is Thor when he’s not saving the universe? Or is being a superhero all that he is?

That’s not a bad setup, but the problem is that Waititi tends to treat everything like a joke, so tonally, the film is something of a disaster. Even Sam Raimi and Chloe Zhao knew what they were striving for with Doctor Strange in the Multiverse of Madness and Eternals, respectively. I don’t know what Waititi was hoping to accomplish with Love and Thunder, which is generally unfocused and as obnoxious as the film’s screaming goats—which provide a good litmus test for viewers. You’ll either laugh every time they bleat or it’ll be like nails on a chalkboard. 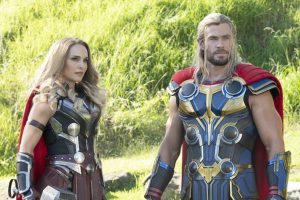 Thankfully, Waititi has three Oscar winners here, although they only succeed to varying degrees. Natalie Portman returns as Jane Foster—excuse me, Dr. Jane Foster—and while she’s good as the Mighty Thor (she throws a mean hammer) and relatively convincing as a cancer patient (given that it’s the MCU), she’s less successful selling the character’s romance with Thor. Plus, the blonde wig should’ve been left to Hemsworth.

Bale, however, nails his depiction of Gorr and imbues the God Butcher with genuine pathos—you feel his pain and ultimately may sympathize with him. Bale steals the movie as he carries out Gorr’s vengeful quest, though he can’t ultimately save this one. It’s a movie beyond saving, thanks to a script that treats Gorr’s daughter as a mere plot device rather than an actual character, while his mission is to get ahold of Stormbreaker (Thor’s ax) in order to open the Gates of Eternity (huh?) never proves particularly compelling.

Hemsworth handles himself well enough with the script’s comedy, particularly in Thor’s tempestuous relationship with Stormbreaker (the ax is jealous that Thor longs for his hammer), and I enjoyed his scene with Russell Crowe, another Oscar winner who makes some, shall we say, interesting choices with his performance as Zeus. But this aside provides little more than brief amusement, a fun detour along a laborious journey that overstays its welcome despite running under two hours (by a hair).

As for the soundtrack, I grew up listening to Guns ‘N Roses, too, so I get where Waititi is coming from and understand his reliance on that band’s hits to establish a certain 80s aesthetic, but watching “November Rain” wasted on some middling, underlit Marvel fight scene was depressing as hell. Like the use of “Sabotage” in Star Trek Beyond, it felt like a prank. 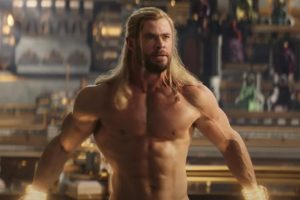 Just as Kevin Feige has cautioned Sony not to get ahead of itself in building a universe, I’m afraid that Marvel has gotten too caught up in its own universe-building, to the point where I have a hard time keeping track of it all—though I know none of it matters. Characters you think are dead are not. How can they be when the only thing that has life and death stakes are the streaming wars themselves.

That may be why Waititi has become a favored son on the Disney lot, where he’s developing a Star Wars movie as well — much of Love and Thunder is played for a lark, or a goof, as has become the Waititi way. I loved Jojo Rabbit but that irreverent style is why some couldn’t connect to it. If Waititi could reign that impulse in, he could be one of the greats, but I think he’s a little too caught up in taking the piss out of everything and focusing on humor when he could stand to be a bit grittier. The truth is, he’s his own worst enemy here and his zany instincts doomed Love and Thunder from the start.

By the time the credits rolled, introducing yet another new Marvel star (just as Eternals did with Harry Styles and the Doctor Strange sequel did with Charlize Theron), I muttered to myself, “so this is what Marvel has come to?” Love and Thunder is one of those movies you see and when your friend asks you about it, you respond, “oh, it’s a movie alright!” And when the end credits conclude with the announcement that “Thor will return,” it sounds more like a threat than a promise this time.