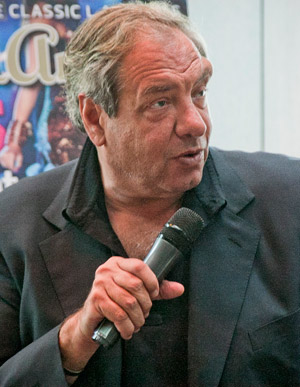 On shadowing cops for research: “I spent about a year going to crime scenes with an L.A. homicide detective which was really interesting and I learned a great deal. It’s sort of bizarre though, on Super Bowl Sunday I got a call that there was a murder in Bell…so I went down there, it was one of those apartments that was sort of a converted motel, and we went in – I beat the detectives there but there were two uniforms sitting in the living room of this motel suite watching the Super Bowl and the dead guy was in the closet wrapped up in telephone cord on his head, and he was watching the game too. It was an interesting moment in crime solving.”

“I fully believe if you go around there is actually a cop gene. It doesn’t matter if you are in Asia, Europe, you can look at a group of people and go cop, cop, cop. They all kind of look similar in some cases. Interesting people. They do stuff that most of us would not want to hear about on a daily basis. For better or worse they are the garbage men of society. It’s bad if they’re not there, but you really don’t want to do it yourself.”

“If you took a 35-year-old NYPD patrolman and a 35-year-old LAPD patrolman, the L.A. guy looks like he could be in the Wehrmacht—razor-creased, stand-up straight. New York cops all look like they’ve got two-day hangovers. It’s a different rhythm, because New York is community policing and the LAPD is really a paramilitary organization by design. So its a very different rhythm on the street.” On Los Angeles politicians: “I think that politicians are politicians, there are good ones and there are bad ones. We’ve got bad ones in New York but they don’t get paid as much as they do in Bell.”

On portraying stereotypical LA personas: “It is the way of fruits and nuts. We are trying to fulfill an expectation of what LA is about. The first episode was very deliberate—it’s not going to be Hollywood every week, but I thought it really was the best way to introduce the show, to show that it was really different from the New York version.”

On viewers’ familiarity with crime in N.Y. and L.A.:  “I think that there is a decided cultural bias against both New York and L.A. across the country. It is Sodom and Gomorrah. Those two cities absolutely, to the rest of the country, represent the worst of America in many ways and that’s an advantage for us because good crime makes good television.” On unpopular verdicts: “Michael Moriarty [who played Ben Stone on the series from 1990-1994] literally used to go into deep depression. He’d lose a case and one day he was really upset and said, ‘It’s not right. This guy is guilty. I don’t like these people getting off,’ and I said ‘look, you have to understand that at the end of the show, the actors don’t go to Attica.’ ”

On moral ambiguity: “The entire ethos of the show is that life is not black and white, it’s a shade of gray. And the more gray it is, the better we like it. That’s the bottom line. Black and white is too easy”

On receiving input from community groups: “I’m going to be very honest, everybody has their own ax to grind. I’ll tell you a story about GLAAD, which is an organization that has done some terrific work but they have a very high sensitivity index about anything that they perceive to not be in the best interests of gays and lesbians. We did an episode probably 10, 12 years ago where there was a doctor…who was selling babies. They were interviewing couples who were in line to get this next baby and one of the couples was a lesbian couple who were by far the most attractive couple that Noth and Jerry went to see. They came out of this lesbian couple’s apartment and Noth said ‘Jeeze, what are you going to do with two mothers, who’s going to teach him to shave?’ GLAAD didn’t like that and the head of community relations called and said ‘We’re very upset about this episode’ and I said ‘What are you upset about, the lesbian couple was by far the most attractive and the most intelligent, what is wrong?’ ‘Well, it was the Noth comment on the street and you’re going to have send the entire writing staff in for a sensitivity seminar on how to write for gays and lesbians’. And I said, ‘You know, I’m not going to send my writing staff in for a Chinese reeducation course’ and he screamed into the phone, ‘Now you’re insulting Chinese people!’ ”

On the show’s structure: “The structural architecture of the show is pretty well cast in concrete, which was brought home by a story that was communicated to us by a defense attorney in a criminal trial in Texas. His defense was, ‘Many of you are Law & Order watchers, and many of you that watch the show know that the first person the police interview is never guilty. The police focused on my client from day 1, they never even interviewed anyone else.’ Interesting defense.”