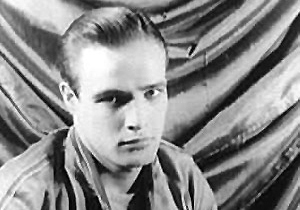 “If a studio offered to pay me as much to sweep the floor as it did to act, I’d sweep the floor,” Marlon Brando wrote in his 1994 autobiography. That unconvincing claim capped off a lifelong habit of ridiculing the notion that a mere performer snared by Circe qualified as any kind of artist. But the signature Brando touch is that he couldn’t even undercut the audience’s investment in his greatness without going for the brass ring in self-abasement.

First off, we’re still in “a studio,” notice. As unrecognized genius makes with the broom in janitor’s overalls, no-talent Rock Hudson strolls by in our imaginations. Next comes the take-this-cup-away-from-me move of “as much,” when anyone in it for the money would, of course, have said “more.” Finally, there’s the humiliation of his alternate gig: Unlike Jesus, Brando can’t even get work as a carpenter. If he’d spoken the same line in a movie, you know his delivery would have had half the audience misremembering “sweep” as “lick” before the credits rolled.

The point of this isn’t just that Brando’s knack for converting water into wine as he flushes the john brings out the oenophile in movie critics. It’s a clue to why his importance to screen acting and the history of movies is two different things. On the latter count, he can’t compete with Cary Grant or John Wayne—actors who helped define whole genres, creating archetypes audiences still respond to without necessarily being conscious of who originated them. By contrast, the three or four indelible parts that made Brando a seismic figure in the ’50s now function as appendages to his legend.

Just as Orson Welles defines the Director as Thwarted Genius, Brando defines the Actor as Thwarted Genius without telling us much else. Vito Corleone in The Godfather aside, his mystique means a lot less to the audience at large than it does to almost every ambitious male star who’s come along in his wake. From De Niro and Pacino to Sean Penn and Johnny Depp—and let’s not forget Russell Crowe, who as a teenage Australian rocker wrote a song called “I Want to Be Like Marlon Brando”—they’ve all coveted his unique luster while trying to avoid the botched career that went with it. The basic mistake here is that thwartedness is the legend’s vital ingredient.

Still, it’s no wonder they’re attracted. Brando’s charismatic example exalts the mystery of acting over any other kind of screen creativity, leaving lesser if conceivably more fruitful ambitions—collaboration in someone else’s vision, for instance—looking compromised. His Stanley Kowalski in A Streetcar Named Desire is a performance no movie lover would want to do without, but it came at the price of a permanent distortion of Tennessee Williams’s intentions in the public’s mind. In movies, magnetism makes right, and poor Blanche DuBois has never recovered.

His slyest gift was for one-upmanship. The great joke of The Godfather is that the actors playing his sons are all, in one way or another, “doing” Brando—and Brando himself isn’t. By treating the Don as a pure character part—built from the outside in, with details of costume and demeanor, and the Method be hanged—he artfully underlined the generation gap while making himself, once again, the most distinctive performer in sight. It’s the least “Brandoesque” of all his major performances, but the paradox is that he ends up demonstrating for our benefit what kind of great actor he could have been if he hadn’t been, you know, Marlon Brando. The further paradox is that then we’d have cared less.

Stefan Kanfer’s biography, Somebody: The Reckless Life and Remarkable Career of Marlon Brando (Alfred A. Knopf, 384 pages, $26.95), repeats the conventional wisdom that Brando brought a new kind of verisimilitude to screen behavior. True enough at one level—the unpredictable physicality, the famous mumbling—this has always been nonsense as a description of Brando’s effect. If anything, he was a specialist in hyperbole, charging every nuance of a performance with poetic anguish; there was nothing everyday about him.

That’s the reason he could safely luxuriate in amping up the juice in Streetcar—the greatest of American plays, but one whose ravishing delirium is about as “realistic” as an Edvard Munch painting—and why he was so much in his element amid the masochistic Christian symbolism and assorted hysterias throbbing under On the Waterfront’s quasi-reportorial surface. The result was that his talent was almost instantly in hock to his myth, which made conventional roles in bread-and-butter movies too small for him and eccentricity his only alternative. No wonder the elderly Brando was to tell a pal who knew from eccentric—Michael Jackson—that he’d had the longest good-bye in the history of show business.

It can’t have helped that he was only 23 “when all the Streetcar stuff hit the fan.” So his actress sister, Jocelyn, later reminded him in a sympathetic letter, referring to the 1947 stage version that made him the king of Broadway overnight. “Can anyone remember how insecure it is to be twenty-three and be saddled with the kudos and notoriety you received?… You couldn’t believe you were actually responsible, and Poppa always said you’d never amount to a tinker’s damn.”

As  Kanfer tells  it, “Poppa”—Marlon Brando Sr.—was the key to pretty much everything. Caught between an alcoholic mother and an overbearing father who treated him as a disappointment without ever spelling out what his expectations were, young “Bud” Brando endured a stint in military school before escaping the Midwest for New York, where he quickly became renowned drama teacher Stella Adler’s prize pupil. By his own account, when Marlon senior kicked the bucket at long last, his reaction dripped with undimmed oedipal venom: “…I said, ‘and not a moment too soon.’ ” Nonetheless, he’d also kept Dad around all that time to (ineptly) manage his business affairs, hinting at a more complicated duet of dependence and malice than Somebody’s put-the-Bud-back-in-Rosebud psychologizing can account for.

A former film reviewer for Time whose other books include biographies of Groucho Marx and Lucille Ball, Kanfer is an improvement on some Brando Boswells. But his blend of false intimacy and gassy sociology suggests that at some level he just doesn’t find his subject congenial and is manufacturing insights to conceal it. His attempts to link Brando to larger currents in American life too often rely on such rickety gambits as assuring the reader that racial conflicts, Prohibition, and the Leopold-Loeb case “provoked conversation at the Brando dinner table throughout the 1920s and early 1930s,” which strikes me as unlikely. We hit rock bottom with the following wise observation regarding GOP challenger Tom Dewey’s failed 1944 presidential run against the aging FDR: “Americans pondered the coming postwar economy, aware that in every field—with the curious exception of politics—there would be a need for different approaches and new faces.” Segue to Marlon’s stage debut in, of all things, I Remember Mama.

Beyond its frequent clumsiness, this approach is worse than useless as a way of accounting for Brando’s impact. Part of what made him a sensation was that he didn’t seem to be connected to any of the prevailing social narratives around him, and so far as his own generation went, he wasn’t. Not only had the Brandos been untouched by the Depression, but Marlon’s 4-F draft status had kept him (with mixed feelings, Kanfer says) out of the greatest formative experience for men of his age: World War II. The same was true of those other Eisenhower-era misfits, the Beats—whose obvious affinities with Brando stay off Kanfer’s radar, one more proof he’s got the wrong set of cultural references for the job.

Another is the way he stresses the psychological slumgullion of Brando’s upbringing without linking it to the fact that the ’50s marked the frantic Freudianizing of America’s pop culture, a much more kinetic connection between  Brando’s style and the time than the balderdash about Tom Dewey. The decade saw a shift from male stars who were perceived as more or less reliable authority figures—grimly or breezily in charge of their world, from fatherly Spencer Tracy to roguishly avuncular Clark Gable—to actors who registered primarily as tormented sons, including not only Brando but his fellow crucifixees on the Method’s Golgotha, James Dean and Montgomery Clift. Because the sexualized vulnerability all three projected also transformed accepted notions of male beauty, they’re key figures as well in the rise of coded gay sensibility in film, a subject Kanfer seems too discomfited by to give more than a hasty, maladroit glance.

Instead, we get digressions on, among other things, Yiddish theater, a remote influence at best on Brando but the subject of Kanfer’s 2006 book Stardust Lost. Odder yet is the bee in his bonnet about Italian cinema as the overlooked cure for the actor’s dilemmas. When Brando, making his first trip to Italy in 1950, skips Rome, poor Kanfer all but tears out his hair: “Preferring slumber to challenge, he had turned his back on Cinecittà, the one place that could have enriched his talent and taken it to a new level of performance and achievement.”

It’s fair to call this berserk, since Brando was in the country on vacation and there’s no evidence that any of the directors Kanfer cites as his potential saviors—Fellini, De Sica, Antonioni, Visconti, and so on—either knew who the hell he was or ever solicited him for a project. For that matter, when Brando finally gets around to filling Kanfer’s prescription, sort of, by starring in Bernardo Bertolucci’s breadless but buttery Last Tango in Paris in 1973, even his biographer has to admit that, despite the bravery of his performance, the movie was overheated claptrap.

His idea that Brando could have saved himself by turning into Marcello Mastroianni at least has the charm of novelty. In a sense, though, Brando was doomed to disappoint us thanks to his longevity. Dean’s spectacular demise and Clift’s slow fade after his disfiguring 1956 auto accident turned their fellow ’50s avatar into the screen equivalent of Teddy Kennedy, saddled with living up to a legend that in his brothers’ cases was safeguarded by their early exits. Kennedy learned to carry the burden with considerable grace, something denied Brando until a scattering of small but superb performances—in Don Juan DeMarco, A Dry White Season, and The Freshman—toward the end of his career. By then he’d been obese and peculiar for so long that neither characteristic qualified as a travesty anymore.