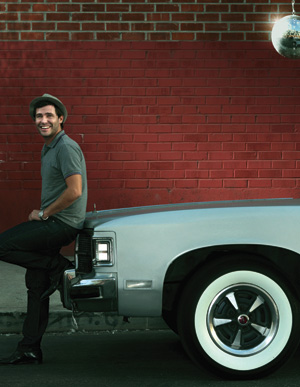 Blame Steve Jobs. These days, everyone wants to be a DJ. But where to start? The British-born Zen Freeman worked at dance clubs in London before moving to Los Angeles in 2001. After a stint in public relations, he turned his attention to the profession full-time. He has manned the digital turntables at corporate events (Verizon, VH1), celebrity birthday parties (Justin Timberlake, Jeremy Piven), awards shows and festivals (the Oscars, Cannes), and TMZ-approved hot spots (Villa, Kress). For $500 to $1,500 per four-hour standard set, he spins a mash-up of electro, funk, pop, hip-hop, R&B, and disco, drawing from his 75,000-track library.

Where should I set up the DJ booth? Where people are going to dance—not where they’re going to talk.

Other than iTunes, where are some places to find good music? I like phonicarecords
.com, juno.co.uk, and htfr.com, which have great bootlegs and limited pressings. I also visit sites like discobelle.net and palmsout
.blogspot.com, where I download remixes of new songs. And, of course, there’s Amoeba.

Should I still be investing in CDs?
The sound quality is better than MP3s, but that shouldn’t matter for a house party.
Even so, there are ways to address that. For example, there’s now a Plus button next
to some tracks on iTunes, which means they’re available at 256 kbps (kilobits per
second)—studio quality.

OK, I have my music. Now what? Start building playlists and experimenting with software. Go to versiontracker.com and download an iTunes application called BPM Inspector, which tracks the beats per minute of any given song and allows you to create playlists based on similar speeds. In iTunes, the Genius feature makes recommendations based on what’s already in your library, and there’s an option called crossfade playback, which allows you to control the continuity between tracks (set it at level ten).

How do I use music to keep the party alive? By building momentum. Create two playlists: a warm-up one (I like Serge Gainsbourg, Sergio Mendes, and a cover of the Doors’ “Light My Fire” by Shirley Bassey to start with) and another that runs a little faster that you can switch to once the evening starts rolling. When you’re selecting tracks, just go with your gut. Does it make the hair on the back of your neck stand up? That’s how I choose what to play.

What makes the hair on your neck stand up—and gets a party rocking? Calvin Harris, the Ting Tings, Depeche Mode, Madonna, Duran Duran, Prince. I played “Kids” by MGMT recently, which is relatively dated, but the dance floor went absolutely nuts.