Home Uncategorized Soaking in the Pier with Chiwetel Ejiofor 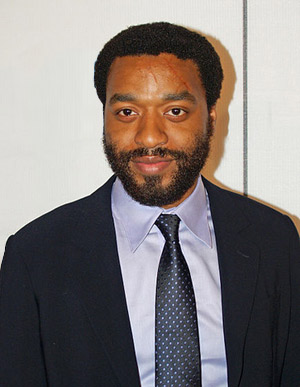 Chiwetel Ejiofor is dumbfounded. After lunch at the Lobster, we’re enjoying a constitutional on the Santa Monica Pier when the actor, dressed in jeans, a black T-shirt, black suit jacket, and boots, cranes his neck to look backward. He gives the Holiday Inn an incredulous stare. “Why,” he asks, “are there no windows facing the ocean?” The hotel offers views of a parking structure and a construction site. “I’ve got to get to the bottom of it,” he says.

Chances are good that he won’t. The London-based actor is on his way back home, where his recent performance of Othello, opposite Ewan McGregor’s Iago, was a sellout. “There is not a single hollow or grandiose note in Mr. Ejiofor’s performance,” wrote The New York Times, echoing scores of critics. “His suffering all but pins you to the back of your seat.” Ejiofor is by nature convincing. So when he says that he will investigate the beach-blind window anomaly, you half believe him, despite the ludicrousness of the notion. His enormous eyes, guileless and astoundingly round, make you believe. Anything.

His might not be a household name, or even a pronounceable one (CHEW-i-tell EJ-ee-o-four), around these parts, but audiences have seen the 33-year-old as Denzel Washington’s quasi-naive brother in American Gangster, as Don Cheadle’s agent turned DJ in Talk to Me, and as Lola, a drag queen in search of a sensible pair of stilettos, in Kinky Boots. His eyes went soft and romantic in Woody Allen’s Melinda and Melinda, and Ejiofor was soon dating his costar, Radha Mitchell, off the set as well. Who could resist? Next, in a villainous turn as a small-town hoodlum in John Singleton’s Four Brothers, those remarkable eyes became slivers, sinister windows into a miscreant’s soul.

Now, in Redbelt, written and directed by David Mamet and opening this month, Ejiofor is another innocent of sorts. He plays Mike Terry, a jujitsu master whose moral code, like his martial art, is based on the ways of the ancient samurai. “Everything has its own power,” Terry tells one of his students. “Embrace it or deflect it. Why oppose it?” His convictions are challenged when he is unwittingly sucked into the Hollywood world of a boozy celebrity (Tim Allen, impressive in a noncomedic role) and an event promoter (Mamet regular Joe Mantegna). “The movie opens up the question of whether a character with integrity would be seen as slightly ridiculous in a contemporary age,” Ejiofor says. “It’s interesting playing a fish out of water, a character who’s looking at something like Hollywood for the first time, with very fresh eyes.”

Ejiofor is mesmerizing in Mamet’s parable. The guy makes goodness sexy. With the strictest economy of motion, the slightest raise of an eyebrow, he conveys a maelstrom of emotions. It doesn’t hurt that he’s unconscionably handsome—and ripped. To prepare for the movie, he practiced jujitsu two or three hours a day for several months. His instructors, John Machado and Renato Magno (owner of Santa Monica’s Street Sports), are members of Brazil’s first family of the discipline. “They really gave me an understanding of the stakes of the character,” Ejiofor says. But when Redbelt wrapped, he dropped jujitsu cold. “You have to leave something behind once you finish a part,” he says. “People sometimes get stuck playing characters. They kind of forget who they are. Maybe they play somebody really cool, interesting, and insightful. And they can’t quite shake it. Ever!”

Mamet came calling when Ejiofor was in London early last year, starring in Chekhov’s The Seagull. “I was planning to take some time off, but there was no way of not doing the movie,” he says. “The way Mamet writes is so poetic. Like Shakespeare, he uses pentameter, a beat.” He and the director had met socially, but Ejiofor wasn’t sure what to expect on set. “There’s something about the quirks of David’s acting that people either love or they loathe,” he says. “In his plays, there are issues that are kind of delicate, and you’re not sure what side he comes down on. So you don’t know who you’re going to be in a room with. But he’s such a pleasant person.” Which is not to say that Mamet is a pushover. In an early scene, Ejiofor’s Terry teaches a basket case of a lawyer, played by Emily Mortimer, how to defend herself. “It involves a rubber knife,” Ejiofor says. “I remember saying to David that I was concerned it might seem a little violent. Did he think there was any room to do the scene without the knife? He said, ‘Oh, that’s interesting. That’s sort of like Peter O’Toole going up to David Lean and saying, “This Lawrence of Arabia stuff is pretty good, but can we try it one more time without the camels?” Mamet holds no grudges. “Chiwetel is like peach cobbler,” he writes in an e-mail. “Try as one might, one cannot discover anything about him that is not perfect.”

Ejiofor has the presence of a tall man, although he’s shy of six feet. His posture is straight, his gait carefree—he bounces as he walks the pier’s uneven planks. A tiny miniature golf course “looks like a back garden,” he says with a laugh. Scanning the beach, he admits to swimming in the ocean on an early visit to L.A. “People were like, ‘What? You swam in the ocean? Are you foreign or something?’” His accent is British, but it’s light, more suggestive of erudition than of place.

Before Ejiofor was born, his father, a doctor and a musician, and his mother, a semiretired pharmacist, immigrated to London from Nigeria. During a trip back home when Ejiofor was 11, he and his father were in a head-on car collision. His father was killed. “I think about him often,” he says. “I think he would have enjoyed some of the things I’ve done over the years.” Ejiofor’s mother sent him to one of England’s finest schools, Dulwich College, which was founded in 1619 by a Shakespearean actor and director. Its library has first editions of the Bard, and local streets are named for his actors. Ejiofor loved it. He devoured plays and performed in school productions. By 15, he had decided to be an actor. “I was immediately passionate about it,” he says. “There wasn’t any kind of filter, and it’s never dwindled.”

A casting agent for Steven Spielberg saw him in a National Youth Theater performance as Othello, and at 18 Ejiofor landed a small role in Amistad, which brought him to L.A. His impression was limited to the sensory offerings of a three-month stay at the Universal Sheraton. “I thought CityWalk was Hollywood,” he says. “I almost went out of my mind.”

His 2002 role in Stephen Frears’s Dirty Pretty Things snapped international audiences to attention. Costarring with Audrey Tautou, he portrayed Okwe, a Nigerian doctor working as a clerk in a London hotel. Okwe, like Redbelt’s Terry, is a noble soul trying to navigate a cutthroat world. “They’re old-fashioned heroes,” Ejiofor says. “They’re everyday men, but they have a superman quality.” His career took off, and he moved easily from TV to theater to film, and between Britain and the United States. He spent months at a time in L.A. “My mood fluctuates here in a way it doesn’t elsewhere,” he says. “I don’t know why that is. I can feel myself quite euphoric one day and then kicking the sand the next.”

When we return to the base of the pier, we say good-bye. Asked if he needs a ride back to his hotel, Ejiofor declines. “It’s just a few blocks down,” he says. “I decided I couldn’t really justify the car coming back here to get me. At some point, you can’t do the L.A. thing. You just have to walk.” Which he does—but not, it must be noted, in the direction of the Holiday Inn.