Home Uncategorized So You Wanna…Learn to Surf 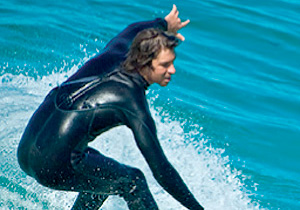 1 Coast the Beaches Summer is a good time for newbies to learn since the water is warmer (though swells can be sparse). There are two types of  surf breaks—beach (fast waves that usually close out quickly and favor shorter boards) and point or reef (slower-breaking waves that are easier to catch, a plus for beginners). Prime spots to learn: at Navy Street in Santa Monica, Sunset in the Palisades, and Old Man’s in San Onofre. Some breaks are better at low tide and some at high tide. Check surfline.com
or watchthewater.com to find out when the swells are in and where.

2 Get into Gear To maximize stability, most beginners should opt for a long board—at least eight feet in length (unless you’re really short, anything smaller will be hard to balance on). Foam tops are cheaper and easier to learn on than fiberglass boards. Don’t buy until you’re committed, but if you do, Marina del Rey’s Action Water Sports has a nice selection of affordable new and used boards. Also check Craigslist, as seasoned surfers regularly upgrade equipment. In summer trade your wet suit for a lightweight rash guard to keep your torso from becoming irritated by the board’s surface.

3 Pump It Up Paddling hard is essential to catching a wave, and upper-body workouts like rowing, dumbbells, and push-ups are vital. Swimming is great for building stamina and to familiarize your body with moving in the water. Yoga will help with core strength and balance. Determine whether you’re “regular” or “goofy” foot (if you kick right, you’re the former, and you’ll stand with your right foot to the rear of the board; if you kick left, you’re the latter, and the stance is reversed). The back leg is also the one to which you’ll attach the leash that ties you to your board.

4 Go Back To Class Learning to surf on your own is tough unless you study surf films or Surfer magazine, so lessons are a good idea. Instructors also assist with the hard part—catching the waves, often with strategically timed pushes. We like UCLA and Bluerider Surf’s classes. The former (recreation.ucla.edu) offers a series of group classes for $180, while the latter (blueridersurf.com) is private and costs $120. Both teach etiquette, ocean safety, the best way to paddle, and how to position yourself on the board so you drop into the wave without “pearling” (when the nose dips too steeply, flipping you off).

5 Respect Your Superiors As with any sport, there are rules. Two of the biggies: Save yourself wear and tear by approaching a break from the side so that you don’t have to battle the waves to get out, and stay out of the way of the better surfers—they’ll likely run over you if you don’t. It’s OK if you can’t stand up right away—riding in on your belly or knees is perfectly acceptable for your first outings. If you’re surfing near rocks or in especially shallow water, be sure to fall horizontally to avoid hitting the rocks or bottom too hard, which might mean a painful wipeout to a budding surf career.