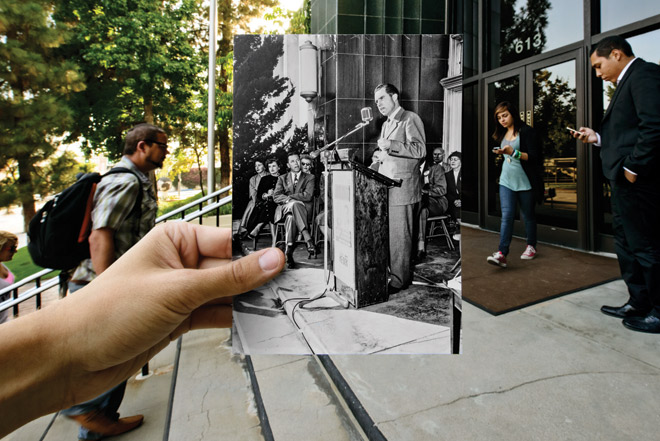 Seventeen years before his “I’m not a crook” speech, Richard Nixon was a local favorite who stumped for the Republican ticket. While vice president, the native son made multiple campaign stops in California for Dwight Eisenhower’s reelection bid. With the election all but won, Nixon rallied for congressional colleagues in front of Glendale City Hall on October 29, 1956, adding his usual warnings about the looming Soviet threat. A few months earlier Ike had contemplated dumping his running mate. Feeling angry and abandoned, Nixon prepared to announce that he would not accept renomination. He entertained offers from law firms but worried about being labeled a quitter, so he reconsidered. In 1974, facing impeachment as president, he didn’t have that choice.

CityDig: This 1946 Map of the Hollywood Hills Bird Streets Sings a Song of Intrigue