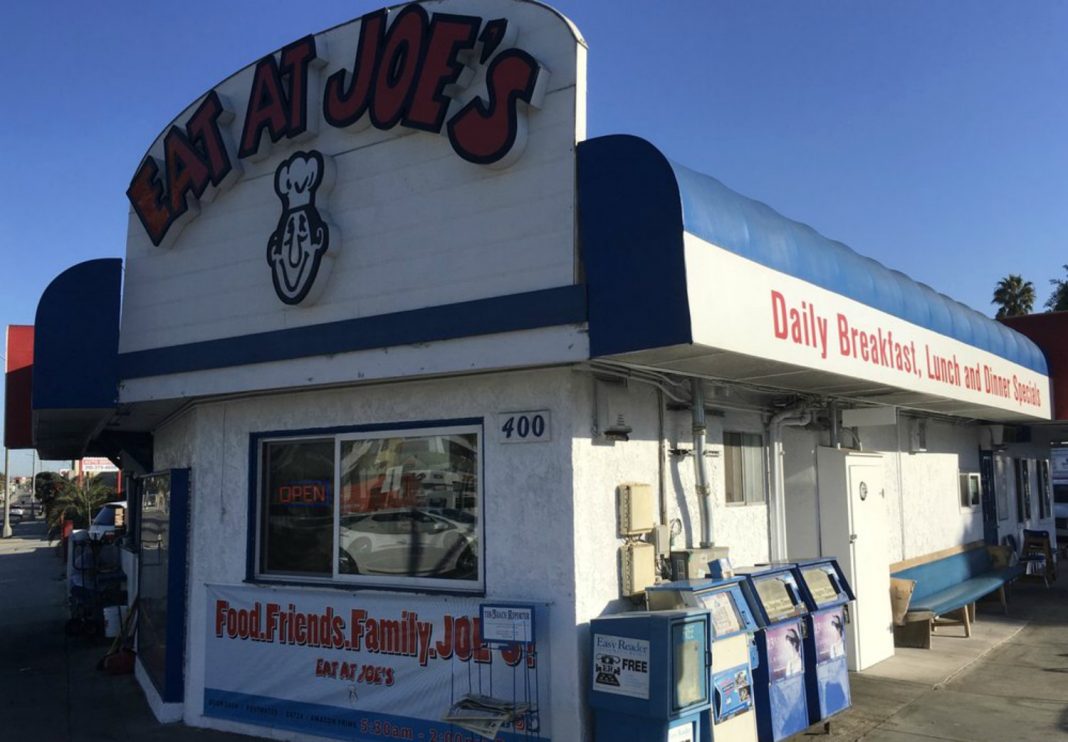 Michael B. via Yelp

With new COVID cases surging to record highs in Los Angeles and the county’s health department stemming the spread with a ban on outdoor restaurant dining, the owner of one beloved South Bay eatery is serving up defiance—with a side of mockery.

Alex Jordan, the owner and operator of Eat at Joe’s restaurant in Redondo Beach, has a creative plan to survive the latest closure mandate: He’s ignoring it. “We’re going to be fine because I will tell you right now: I’m not closing,” Jordan told the Daily Breeze. “I’m going to take the chance that nobody is going to enforce it.”

On Tuesday, L.A. County shattered its previous daily record with 7,593 new reported cases. Public Health Director Barbara Ferrer called it the “worst day” of the eight-month pandemic in Los Angeles, and, she said, it won’t remain the worst day for long. “That will be tomorrow, and the next day and the next as cases, hospitalizations and deaths increase,” Ferrer said in a statement.

Jordan says he has nothing to lose by staying open. If the health department shows up to shut him down, “I won’t be any worse off than if I never stayed open,” he told NBC Los Angeles. “It’s mostly about keeping my employees employed at this time of the year,” he told NBC LA. “There’s no other aid for them, so we want them to be able to earn a living and get through Christmas. And I also feel like it’s somewhat unfair.”

News of his defiant gesture has turned Jordan into something like a folk hero on social media—especially among conservatives, who’ve cheered the “French Laundry” banner he has draped over the front of the restaurant, a jab at Governor Gavin Newsom.

Earlier this month, days before Newsom moved to assign 41 counties to the state’s strictest “purple tier” in an effort to slow the spread of the coronavirus, the governor attended a dinner with friends and lobbyists at the posh French Laundry in the heart of the Napa Valley. Newsom has since apologized and called attending the pricey party “a bad mistake.” “That was totally hypocritical,” Jordan told NBC. “Him going out and having dinner at an expensive restaurant in Napa just set me on edge. So I decided to put that up because I figured if it’s good enough for Gavin Newsom, it’s good enough for all of my clients.”

Residents in Redondo Beach have reportedly called the police on Jordan for keeping the restaurant patio open. He spoke to the police, and then later in the day some officers came to the takeout window to pick up food. “They saw all kinds of people,” Jordan told KCRW’s Benjamin Gottlieb.

Many in Los Angeles wonder if Jordan’s scofflaw routine will spread to other restaurants in the county “We’ll stay open as long as we can and we’ll see what the health department has to say,” he told NBC. “Hopefully they’ll come to a realization that this was a good idea.”