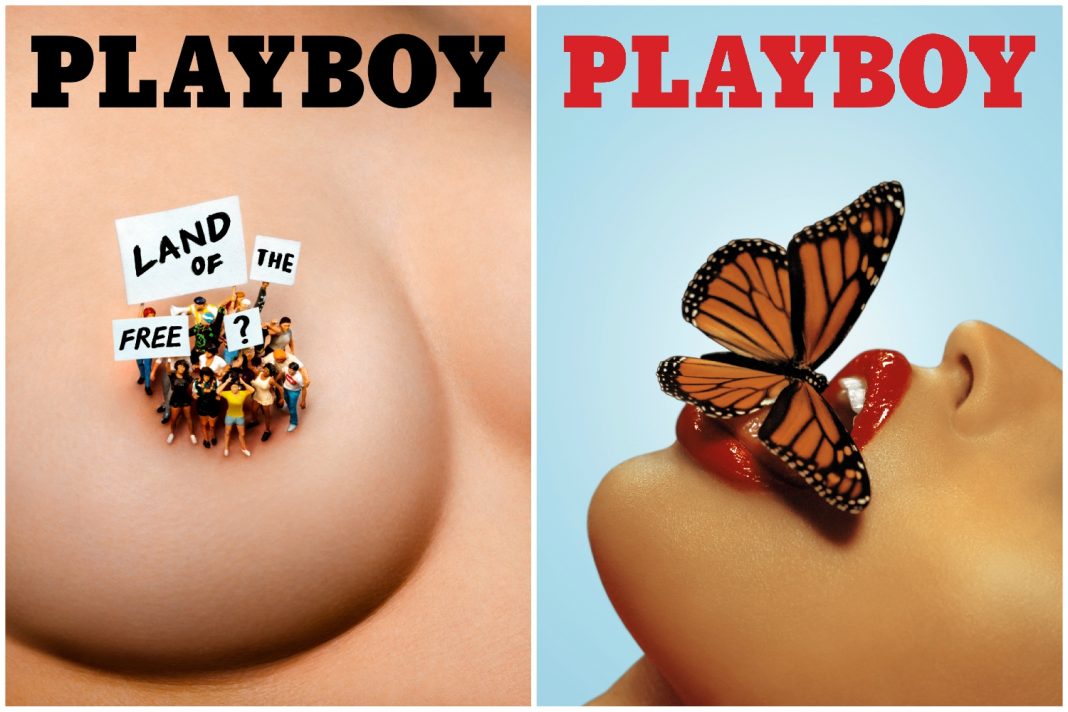 In its September 1975 issue, Playboy devoted 15 pages to a funny, provocative interview with author-poet Erica Jong. Two years earlier Jong’s book Fear of Flying became a best-seller and cultural sensation for its candid portrayal of female sexual desire, not to mention introducing the phrase “zipless fuck” into the American lexicon. Here’s a snippet:

Playboy: Speaking of fucking, what’s your opinion of the diagnosis made by men that all some women need is a good fuck?

Jong: A lot of men need a good fuck, but they’re incapable of getting it because they regard their penises as sort of detached from the rest of their bodies. I think there are very few people who know how to get a good fuck, getting on that subject.

Ribald, sure, but you could seldom accuse Playboy of being vapid. “I read it for the articles” (i.e., not for the boobs) became a cliché, but it wasn’t a totally outlandish suggestion either.

Now a quarterly with a fresh look and a more woke POV, Playboy is tapping into its long history as an arbiter of desire and hosting a brainy, ballsy pop-up featuring (among other things) a conversation with Roxane Gay, a panel on the Equal Rights Amendment with “Free the Nipple” founder Lina Esco, and a Mother’s Day “fireside chat” on sex and womanhood with Jong and daughter Molly Jong-Fast. It is your father’s Playboy, but a fresher, more egalitarian version.

Called Playhouse, the weekendlong event is the first the brand has hosted (but keep an eye out for one on the East Coast), and it’s taking over the WeHo space formerly occupied by Egg House. We talked to CMO Rachel Webber about what people can expect from the weekend and how it reflects what Playboy stands for today. (The interview has been edited for length.)

Tell us more about Playhouse and what Playboy is presenting.

Our ambition with the Playhouse is to welcome people to step into the pages of the magazine: the famous Playboy Interview becomes a live conversation, the Playboy Advisor becomes a session with an accredited sex expert, our fiction becomes a phone booth meets boudoir where the stories are read aloud to you. We’re inviting you to join our conversations on equality, freedom of speech, gender and sexuality, and pleasure with our contributors and community. We want you to feel like you’re inside the pages of Playboy magazine—one part immersive art, one part arousal of the senses, one part thoughtful and provocative conversation, and, of course, wholly playful and fun.

There’s a panel on the future of masculinity. Playboy practically dictated the parameters of masculine desire for so many generations—what does it see for the future?

Ideas like “masculinity” and “femininity” are dynamic. They’re rapidly evolving as young people explore and understand gender fluidity and sexual fluidity and challenge the use of these labels overall. We can certainly see this change happening all around us.

Our features on Nico Tortorella (who contributed an essay about the power of being gender-nonconforming and pansexual), Ezra Miller (who became one of the first men in recent history to wear the Bunny ears in our magazine), Sarunas J. Jackson (who spoke about the high-pressure expectations of black men within black culture in an interview) and David Harbour (who opened up about his vulnerabilities and battles with mental health issues) all work to show our readers that “being masculine” does not mean one thing nor look like one thing nor limit you to one type of behavior. Extending the cultural understanding of #masc-ness, and what “makes a man,” is a role, and frankly a responsibility, we see Playboy having now and in the future.

The Erica Jong panel is cool given her history with the publication. How does a legacy publication achieve and maintain multigenerational appeal?

I think Playboy’s multigenerational appeal stems from the fact that our core values are timeless—we believe in equality, sexual freedom, freedom of speech, and pleasure for all. Those values were inherent to the brand in 1975 when Erica Jong sat for the Playboy Interview and remain relevant today as Molly writes op-eds on being a progressive woman in the age of Trump’s presidency.

But to answer the question, the real way we maintain a multigenerational appeal is by listening—to the conversations going on around us, to the individual stories, and to the feedback audiences give. By doing that we hope to bring these conversations into the mainstream—and for people to want to put Playboy on their coffee table and take it out from under the bed. It doesn’t hurt that it’s visually stunning as well.

RELATED: How the World’s Sexiest Nightclubs Helped Set the Stage for Racial Integration

California Is Set to Become the First State to Outlaw ‘Stealthing’