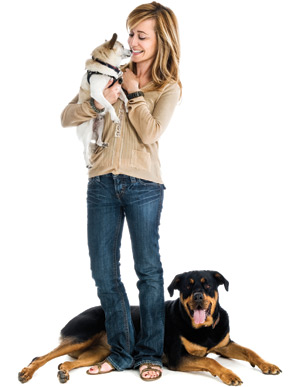 “Horses lie. They’ll be telling me all of this information, and it turns out it’s all made up. Like, if they’re 20 years old, they’ll say they’re 10. They’re so smart. They know how to spin a story.”

A pet psychic is someone who acts as an intermediary and relays messages between animals, both living and dead, and their owners.

Animals, she says, communicate through thoughts and images. A dog might tell Cronin about the things it likes to do by sending her a “feeling of excitement,” plus a succession of images such as wrestling at the dog park or chowing down on leftover roast beef. Other times, she says, they convey how much they appreciate what owners do for them (even cats are grateful, apparently).

During each session Cronin assesses the animal’s “issues”: Has the dog been chewing the sofa? Has the bird been reclusive? Then she’ll ask the animal how it’s feeling and whether it has any special messages for its owner. “Some pets have a laundry list of needs.”

Sonya Fitzpatrick is considered the most famous practitioner in the field. Her show, The Pet Psychic, aired on Animal Planet in 2002.

In June George Clooney reportedly hired a pet psychic to communicate with his 280-pound Vietnamese potbellied pig, Max, who died in 2006. Approximately one-third of Cronin’s work is with dead or dying animals; owners usually contact her to find out whether the animals are suffering.

When Cronin moved to L.A. ten years ago, she worked as a dog walker and trainer. “There was always a reason why an animal was behaving a certain way, and I was able to get to the bottom of things by asking it directly what was going on.” A year later she became a psychic.

The wife of a billionaire once flew Cronin to the Hamptons to do a reading for her horse and three poodles for $2,000.

Growing up in Chicago, Cronin had a household full of pets. “I would know to respect certain animals because they would tell me they bite.” Her mom read Turkish-coffee cups, and her grandmother was known as the village witch in her native Iran.

Cronin does about half of her work with dogs like Foxy and Nola (pictured), but she has also read for cats, rabbits, turtles, birds, and a guinea pig (“He didn’t have a whole lot to say”)—about 1,500 animals total. Recently two cat owners called in to a monthly Internet radio show that she hosts. She kept getting information wrong about the first cat. “The second cat was so pushy, it wanted to get through, so it was interfering with the call. Of course, I completely doubted my abilities.”