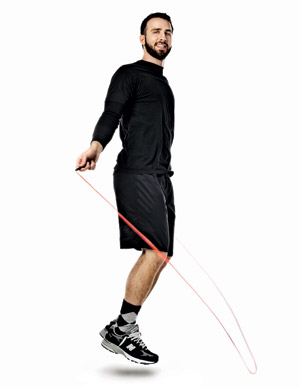 “I don’t have the velour Gucci tracksuit and blinged-out cards. If you want good training, I’ll give you my number and we’ll get down.”

» Farhoudi grew up near Austin. As a kid, he played soccer, basketball, and football, then attended Texas Tech, where he joined the school’s football and soccer teams and earned a B.S. in psychological development, with a minor in dietetics.

» Upon graduation, Farhoudi moved to the Bay Area to become a sports agent: “I wanted to be like Jerry Maguire.” Almost immediately he was turned off by the cutthroat nature of the business and six months later moved to L.A. to figure out what he wanted to do. To supplement his income as a bouncer, he started training clients at a West Hollywood gym. Today he has 16 regulars.

» Farhoudi works out of Easton Gym, on Beverly Boulevard, and the Gym on Nemo, in West Hollywood; he also makes house calls. He charges $90 to $140 an hour and usually works six hours a day, five days a week.

» A session lasts an hour and includes stretching, a 45-minute workout, and a cool-down, but it can vary depending on the needs of the individual and the frequency of the sessions. “They tell me what they want, and I fill out the ‘prescription’ based on what I think is right for them. It’s like creating a new piece of art every day.”

» In an average week Farhoudi runs 20 miles and does four weight lifting sessions. He also does Pilates or yoga about four times a month (he has memberships at Equinox and Crunch). He primarily follows the Zone diet, which emphasizes balanced eating—a practice he didn’t learn growing up. “In the South, if it ain’t fried, it ain’t good.”

» In 1968, Dr. Kenneth H. Cooper coined the term “aerobics” in his book of the same name, which became the bible of the fledgling physical fitness movement and has sold more than 30 million copies.

» Several of Farhoudi’s clients are actors, such as Dominic Monaghan (The Lord of the Rings) and Jessica Lowndes (90210). “I consider 90 percent of my clients dear friends.”

» When Ellen DeGeneres trained with him, she discovered that Farhoudi would TiVo her show so he could fast-forward to the interviews. During one taping, she brought oversize flash cards onto the stage that she displayed in sequence: Ryan! If you’re fast-forwarding, stop!

» Farhoudi has begun to pass along scripts from his writer clients to producer and manager friends in exchange for a finder’s fee or a coexecutive producer credit. He also writes screenplays. Still, he insists he didn’t get into the training business to break into film. “Even if I became a multimillion-dollar movie producer, I’ve got clients who wouldn’t let me quit training them.”

» “One guy I trained knew I had a million dollars of insurance coverage. He looked me dead in the eye and was, like, ‘Drop the dumbbell on my foot.’ He wanted to sue me and then split the money.”

» “So many of my female clients want to have affairs. It’s not always overt, though sometimes it can be. They’ll wear a little bit more makeup or perfume, or their eyes will linger, or they’ll lick their lips more. I think that 60 percent of the married women I’ve trained would have an affair.” Farhoudi says he has “fooled around” with six of his clients.

» Training can be a very intimate experience. “You are touching and holding and listening, and you know if someone is having a bad day. I think that’s why women get enchanted.”

» Farhoudi never poaches clients from fellow trainers. “I’ve literally turned people away because they have trained with friends of mine. It’s like sleeping with your buddy’s ex-girlfriend. There’s a code of conduct.”