Pandemically challenged fashion watchers have been whining for two years about not getting their usual four-times-a-year fix of decked-out celebrities, editors and just plain old rich ladies in their sartorial splendor at international fashion shows. Just before the 2020 lockdown ax came down, it seemed like there were such myriad Instagram pics of celebrities backstage in designer duds, one was just exhausted by it.

Let’s face it, too much eye candy can be blinding—even boring after a while. But this week, the fall 2022 couture shows in Paris are a sight for those poor candy-deprived eyes. Since couture means one-dress-for-one-woman, where customers order off the runway so no one else gets the same dress, the $50K prices of these opulent handsewn gowns, dresses, pant suits, and even minis means it’s an even more exclusive, clublike event for stars to attend.

t’s also an excellent Instagram opp since they get hair and makeup done, for free, backstage by some of the biggest names in the beauty business. And, of course, they’re dressed in next season’s looks, which have yet to be photographed in all their splendor.

It’s only a few-day affair—unlike ready-to-wear fashion weeks, which can go on for an exhaustive 10 days, so it was a celebrity limo logjam in Paris for the last few days. 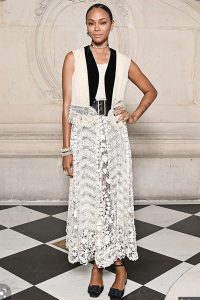 At Dior, Zoe Saldana was the guest of honor in a romantically off-white lace look from the house’s cruise 2023 collection. Saldana even allowed VogueRunway.com to shoot her every move with the glam squad backstage. Also present was Saldana’s co-star in the upcoming Avatar: The Way of Water, Sigourney Weaver, and British musician Celeste. The Dior couture collection, designed by Maria Grazia Chiuri, was not quite autumnal but a pastiche of a mostly covered-up white embroidery-heavy collection, which was inspired by Ukrainian artist Olesia Trofymenko, This is a hue most women can’t pull off in fall or winter—unless they have a car and driver. Still, we wouldn’t be surprised to see Saldana and Weaver dressed in Dior couture for their upcoming press tour in December, when James Cameron’s long-awaited sequel opens.

Balenciaga couture, however, was clearly the event of this Paris fashion week. Not only did Nicole Kidman, Kim Kardashian and Dua Lipa show up in head-to-toe Balenciaga, designed by Demna Gvasalia, each actually traversed the runway, a rarity for any fashion show, even the majors. Think of how many Insta and TikTok hits that will generate! Kidman’s one-shoulder ruched silver gown looked like it was constructed of silver foil—paired with dramatic long black opera gloves; the look was reminiscent of a 1950s William Penn fashion photo. In the front row were her husband, Keith Urban, Kardashian’s daughter North West and mom Kris Jenner, as well as Everything Everywhere all At Once star Michelle Yeoh.

There are amusing photos of Kardashian, Kidman and Lipa bonding backstage. Maybe that had something to do with the fact that Kidman arrived in a black space-age pair of Balenciaga bowtie-shaped shades (think: old-school Batman mask) in which Kardashian was photographed in 2021. Well, if actresses avoided wearing something that Kardashian wore, there would be almost nothing left. Meanwhile, most of Gvasalia’s designs were in monotones of black, silver, or blue and featured male models in Balenciaga men’s as well, with strong shapes, shoulders, and nipped waists—looking more like classic 1950s Dior than Grazia Chiuri’s Dior show. The last two gowns, one in pink, and one in wedding white, featured enormous ballgown skirts that are likely coming to a small screen award show red carpet near you.

Over at Schiaparelli couture, designed by one of fashion’s biggest stars of the moment, Texas-native Daniel Roseberry, there was a grand but utterly eclectic front row that included supermodel Karlie Kloss (whose husband is Jared Kushner’s brother, Josh), singer Rita Ora, actor Natasha Lyonne—who seems to have become a fashion show junkie in the last few years—Euphoria star Hunter Schafer and actor Emma Watson. Naturally, they were all dressed by Schiaparelli, which goes without saying. The whole premise of flying celebrities in—often paying them—is for marketing your brand. Who has more Instagram numbers than all these ladies? Kim K. has 322 million followers alone. Anything she wears, I’m told by luxury brands, sells out within days if it’s in stores or is pre-ordered to capacity before release.

At Armani Privé—a fave of Lady Gaga and Cate Blanchett (though the latter was just signed as a new face of Louis Vuitton, so that’s the end of that)—young star Zooey Deutsch had the best outfit of the week, one only a 27-year-old could pull off: A strapless black tube top, exposing her midriff, which was topping a black maxi skirt with sporty white piping. Clearly, Deutsch has been following the runway shows—the maxi pencil skirt is the key piece for fall 2022.

Over at Fendi couture’s show, designed by Kim Jones (who also designs menswear for Dior), Bond girl Lashana Lynch turned out to observe one of his strongest collections yet, inspired by the culture of Kyoto in Japan, with some of the fabrics being copies he ordered of kimonos from the 1700s, in mostly sepia tones.

Well, so much for celebrity fashion deprivation.