Home Uncategorized Once Is Enough 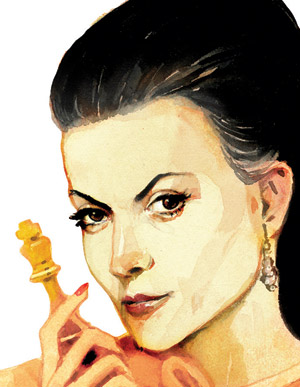 Gigi Levangie Grazer makes me miss Jacqueline Susann. That may not tell you a whole hell of a lot except that I’m not getting any younger, since little did I dream as a dirt-seeking eighth grader that Susann’s Valley of the Dolls was going to end up as a book I’d be comparing to anything but the July 1971 issue of Swank. Give Susann credit for knowing her place, though. She never wasted our time by pretending to be clever, grinding out celebrity peekaboo with about as much authorial posturing as a lawn mower. Better yet, she knew we didn’t give a damn about her. Whoever her heroines were, they were never coy stand-ins for Jackie Susann.

This is not the case with the former Mrs. Brian Grazer, who isn’t such a fool as to go back to calling herself Gigi Levangie. GLG’s best-known novel, The Starter Wife, was a transparent if prescient roman à clef about the breakup of her marriage to Imagine Entertainment’s honcho, predating life’s imitation of art by exactly two weeks when it appeared in 2006. Even when their situation is less directly autobiographical, her lead characters have a way of morphing into the same familiar gal. We can deduce her true identity because she’s presented as sympathetic on no discernible grounds.

Her behavior is as trashy and selfish as everyone else’s. Her petty malice and tiresome snark don’t sound any different from the bitchy prattle of the characters she’s putting down for being shallow. But GLG’s moral compass would put a roulette wheel to shame. Unstated in so many words but all the more magnificent because she sees it as a given, the perennial theme of her fiction is the gallant struggle of someone who deserves to be narcissistic against a bunch of losers who don’t.

In that magic word “yet” is, presumably, the source of their appeal. After all, GLG is living testimony It Can Be Done—and then, even more thrillingly, Mocked, though not to the extreme of actually rejecting the lifestyle in question. She doesn’t know any others exist.

However illiterate, Susann was also pretty good at avoiding slipups on the level of the title of GLG’s latest facsimilized version of life at the top: Queen Takes King (Simon & Schuster, 336 pages, $25.99). If anyone at Simon & Schuster mustered the nerve to tell our novelist that “Queen takes king” is a nonsensical phrase in chess lingo and makes her sound as if she’s from Mars, she was undeterred. For one thing, her ingenious comparison of a high-stakes New York divorce to a chess match and of Manhattan to the “Ultimate Chessboard” generates chapter handles too witty to part with: “The Pawn Is Rooked,” “Thoughts from a Knight on the Town,” like that. More vitally, her invented move sets the seal on the youthful attraction between her married antagonists.

He’s future building tycoon Jackson Power, in flashback an aspiring painter in Greenwich Village. Jackson as in Pollock, but Power as in power, get it? She’s Cynthia Hunsaker, newly minted danseuse with—no, not the New York City Ballet—the New York Ballet Theater. These two starry-thighed idealists first meet when he’s playing literal chess in Washington Square Park (does GLG know her Big Apple details or what?) against “a wiry black man with matted hair.” Inspired by her presence, Jackson sees how to win: “Queen takes king,” he says, suiting action to word. Nodding toward Cynthia, his dusky opponent gives him some sage advice: “She good luck, boy.”

Good luck? If that’s how she reels men in, she’s freaking Tinkerbell, that’s what she. Nonetheless, the cruel years pass more or less as they do on our humble calendar, leaving Jackson atop New York’s pinnacle once he follows Artemus, his crusty old coot of a callous dad—“Hitler was a failed artist, too,” scoffs Artemus callously, just like the old coot he so crustily is—into real estate. As for Cynthia, her body is still “her sylphlike body” (page one). Just the same, untold wealth has plainly been no bowl of unicorns: “Cynthia looked past the custom Bonnet stove she’d never used to the white Carrara marble countertop she’d used once, for a photo spread.” (By then, we’ve reached page 12, and it’s almost as if she’s just another…possession.) Once an enraged Mrs. Power learns from the New York Post that her “Jacks” has been boffing morning-news cutie Lara Sizemore, it’s Katie-Couric-bar-the-door time.

If the Powers strike amateur sleuths as having a passing—heck, even these days, a solid C minus is a solid C minus—resemblance to Donald and Ivana Trump, guess again. Mentions of both Trumps crop up in the text, conclusively demonstrating that Jacks and Cynthia are different people altogether. Similarly, only at first glance does Lara seem to have been Frankensteined out of shower-soap bits of not only Couric but also Diane Sawyer and Jessica Savitch. Here’s more egg on your face: They’re name-checked, too. To outfox GLG, you’d have to get up so early that you might as well just never go to bed again.

In spite of her shift to a skyscrapered backdrop from the Rodeo Drive purlieus or pearl loos of her earlier books, GLG knows that some of her guesses about the lesser orders are transportable. One is that women of color with fanciful names are always good for voicing home truths. Queen Takes King’s Caprice, who despite her posh job as Jacks’s executive secretary is capable of Butterfly McQueenisms like “He say your father say to call you,” is a worthy successor in every way to Lavender—The Starter Wife’s Malibu Colony porch African American, helpfully described at one point as having “a Whoopi Goldberg white-people-are-plumb-crazy moment.” Either the casting director had drowsed off or budget concerns intervened, since another actress got the part in the miniseries. But nudges like that are GLG’s favorite shortcut to vivid characterization.

Another GLG evergreen is that gals with marital problems can always use a wiseacre male confidant who’s sexually off-limits. If you liked Will, Starter Wife’s bitchy gay decorator, meet his East Coast twin, Goldie, Cynthia’s puckish, life-loving psychiatrist. That two men so different should have interchangeable dialogue just proves their creator’s satiric gifts, since her shrewd subtext is obviously that shrinks are “interior decorators” by other means.

Above all, GLG understands the proper reward for a heroine who’s been brave enough to reject her husband’s shoddy nouveau riche values after reaping the benefits for years: to wit, a new beau with as much or more money but better taste. Jacks Power looks pretty inelegant next to the fellow who wins Cynthia’s heart as soon as she steps past his butler to spot a Frida Kahlo painting in the foyer—and not just any old lo-cal Kahlo but the kind of hallowed Kahlo she wishes she’d bought for herself decades ago with a hefty chunk of Jacks’s loot. “Is this home?” Cynthia wonders, and those italics aren’t mine.

This sugar daddy’s Starter Wife equivalent was the virtuous, homeless Vietnam vet who turned out to be the restless scion of an old-money San Francisco family, a plot turn more than a bit reminiscent of My Man Godfrey, among many other Turner Classic staples. But then GLG’s story lines are invariably jerry-built garblings of ancient movies outfitted with modern product placement, along with a hatred of bodily functions—particularly when associated with aging—that would curl Margaret Hamilton’s shoes. Unfortunately, nothing in Queen Takes King matches the two separate passages in 2003’s Man-eater in which the heroine reflects in disgust on her mother’s toilet habits, including a memory of rushing Mom to the hospital “so a dashing Indian intern could stick a long, dark finger up her mother’s tiny, crepey butt.” Even so, the fears of one of Cynthia’s lovers are in much the same vein: “Please God, don’t let Cynthia’s pussy feel like tree bark. What if I get splinters in my dick?”

In case you’ve ever wondered what kind of prose Ann Coulter might be capable of if she ever shook off her inhibitions and tried her hand at fiction, GLG’s ruminations on the way of all flesh might be the place to start. On the downside, though, Queen Takes King somehow just doesn’t feel too—how to put this?—current, no great sin if you’re Edith Wharton but a cardinal one if you’re GLG. Not only are The Donald and Ivana fairly dated grist for any sub-Susann mill, but Manhattan building tycoons aren’t anyone’s idea of masters of the universe these days. Since GLG presumably knew as much by the time the thing was in galleys, she rather desperately endows Jackson Power with second sight just before his final triumph: “His world, the world of New York real estate, had peaked. The housing market would plummet…. Developers would go bankrupt. Good friends…would be out of the business forever.”

Too bad that the scene that follows has him apparently suppressing this glimpse of the abyss as he delivers a rousing talk on how to “Power Up Your Wealth” to a crowd at the Javits Convention Center. Yet true GLG fans will be more dismayed to learn that she thinks Grey Goose is the ultimate vodka—how 2005 of her!—and has yet to notice that even Madonna stopped bringing up Frida Kahlo in interviews some years ago. Conceivably, she’s making her long-planned leap into magical realism at last. But more likely, GLG isn’t getting any younger, either.