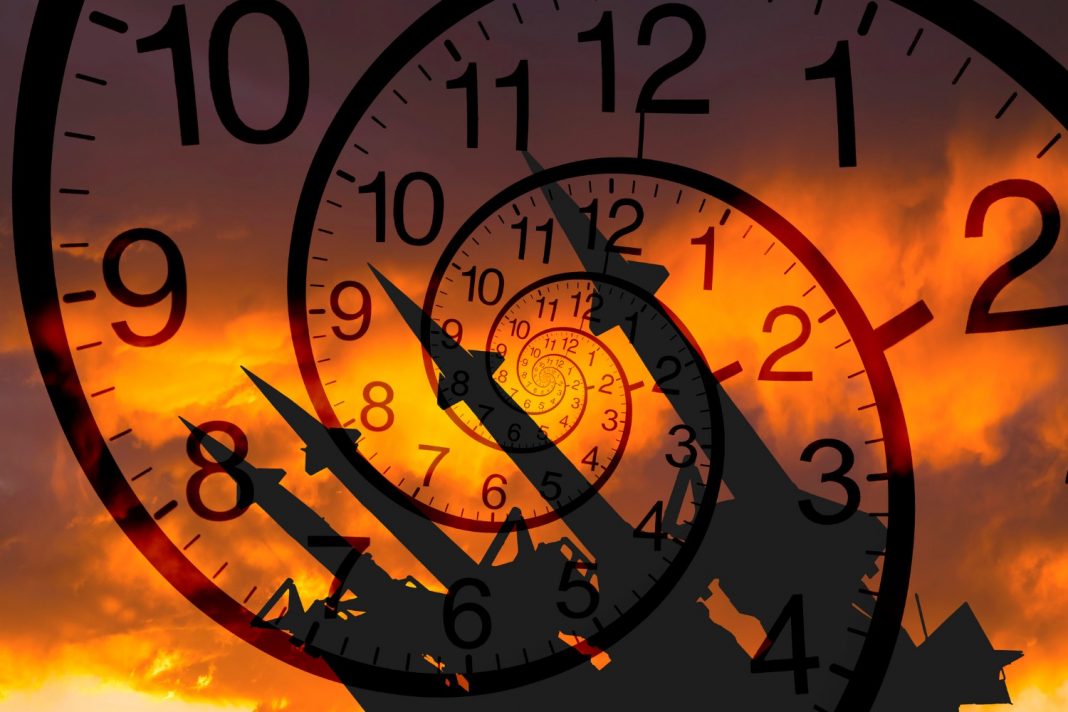 The Doomsday Clock—a fun symbol of how close humanity is to destruction, established in 1947—now ticks closer than ever before to world’s end, at just 90 seconds to midnight.

The Bulletin of Atomic Scientists, created in 1945 by Albert Einstein and the University of Chicago, cited “unprecedented danger” of nuclear proliferation due to the war in Ukraine—along with the climate crisis and biological threats—for announcing as loudly as possible that we’re all much closer to being crisped in manmade hellfire than even at the height of the Cuban Missile Crisis and two major proxy land wars in Asia.

The group (which includes scientists, former politicians, and consultants) released a statement Tuesday, explaining why it had adjusted the Doomsday Clock for the first time since 2020, NBC News reports. In a video, they shortened the countdown with a dire warning in case springing the clock forward was too subtle.

“The time on the Doomsday Clock represents the judgement of leading science and security experts about the threat to human existence,” Rachel Bronson, President and CEO of the non-profit said. “We at the Bulletin believe that because humans created these threats, we can reduce them, but doing so is not easy, nor has it ever been, and it requires serious work and global engagement at all levels of society.”

The main reason behind the change is the invasion of Ukraine that has so far caused an estimated 200,000 dead and 7,000,000 displaced. “Putin has repeatedly raised the specter of nuclear use,” Steve Fetter, Dean of the Graduate School at the University of Maryland said. “These nuclear threats were intended to deter direct involvement by the United States and NATO. And the US and NATO have avoided direct conflict.”

The U. of Maryland educator went on, “But as careful as the US and NATO might be, the possibility of nuclear use cannot be discounted. Accidents, mistakes and miscalculations could lead to unintended escalation, and Putin might deliberately escalate if faced with the prospect of defeat.”

Fetter also cited a nuclear threat from North Korea, which fired a record number of missiles in recent years, but has fewer warheads than any nuclear nation and, it’s believed, no long-range delivery systems.

The last time the clock was changed was in January 2020, when it jumped forward 30 seconds. Today, the experts also warned of biological threats that continue to put pressure on human stability as showcased by the COVID-19 pandemic. “The world continues to experience the fallout from this disease with no clear end in sight despite hundreds of millions of dollars that have been spent globally,” said Suzet McKinney, member of the Bulletin and also the Director of Life Science at Sterling Bay, a commercial real estate company said.

The climate crisis continues to impact the current risk of catastrophe as well, the experts said, calling on nations to reduce their carbon dioxide emissions.

The Doomsday Clock, however, is about nuclear war. To that end, the Bulletin called on leaders to come together in a global effort, encouraging the U.S. to continue “principled engagement with Moscow.”

How an ARkstorm Could Wreak Havoc on Los Angeles