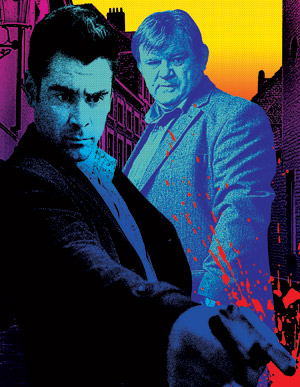 In my callow youth, having watched the Grammy Awards through the years, I realized many of my favorite records—Astral Weeks, Fun House, Another Green World, The Harder They Come—didn’t exactly rack up the prizes. Then I learned something startling: The recording academy had a stipulation (and may still, for all I know) that a record must sell a certain number of copies to qualify for a nomination. Though the same isn’t true of the Oscars, it might as well be. For decades most of the movies I loved were passed over in favor of box-office smashes, from The Sting to Forrest Gump. You would think popularity is its own reward, not to mention tens of millions of dollars, and that one of the reasons to give awards is to acknowledge now and then the creative risk taken at the cost of massive popularity.

This past decade, however, smaller, idiosyncratic movies have dominated the Oscars. In part I think Academy voters have become gradually more film savvy over the course of a generation, and in part it’s political and self-interested: Actors make up the Industry’s largest constituency, and they like movies about people as opposed to characters created by computers. In a way it’s just the latest battle in an ongoing guerrilla action against the studios that began in the ’30s, with Bette Davis telling Jack Warner she would just as soon run her own career, though she put it more colorfully. The schism between blockbusters made by committee and movies born of a singular artistic vision also has grown so pronounced that even the studios can’t pretend Transformers is art. In any event, a lot of the same critics and columnists who once bemoaned accolades for big bombastic pictures like Titanic lately find themselves dismayed by the “elitism” of honors for baffling little pictures like No Country for Old Men. The flash point seems to have been the shrinking audience for the various televised awards, most notably the Oscars; the assumption is that the audience has diminished because the movies have diminished, and no one cares about them. This ignores that the shows themselves happen to stink, and it takes for granted that people watch the shows to root for particular contenders, a specious notion. People watch the shows for lots of reasons—to see dresses and drama and stars, who otherwise live uncommonly charmed lives, in the momentary thrall of having their dreams dashed. But the most stunning, if not always stated, conclusion is that it’s the fault of smaller movies that no one sees them, and not the responsibility of an industry that tried its damnedest to ship Slumdog Millionaire straight to video, only for the picture to be rescued by the public, like Juno two years ago and Little Miss Sunshine the year before that and Crash the year before that. Whatever you think of those examples, the attention to smaller, more individualistic movies is the one thing the Oscars have gotten right.

During the past 12 months, five gems in danger of being overlooked on their initial release have found lives on DVD. You’re not going to see a documentary—still a dreaded word in the movie business—less documentary-like than Man on Wire, as sly and full of itself as the central figure, Frenchman Philippe Petit, who in 1974 danced on a tightrope between the Twin Towers a quarter mile above the earth. There’s not a lot of documentary footage in Man on Wire; much of it is reenactment, relayed with the tall-tale flair of a pathological self-mythologizer about whom everything is suspect except his obsession. That the younger Petit bears a resemblance to Malcolm McDowell in A Clockwork Orange only reinforces the impression. You’re not going to find an arty foreign film less arty than the French thriller Tell No One, with perhaps the most quintessentially Hitchcockian “wrong man”—in the wrong place, desperately on the run to solve a mystery before it devours him—since Cary Grant half a century ago in Hitchcock’s North by Northwest. This being a French movie, the emotional stakes are beyond anything dared by American thrillers. However old you are, the “teen comedy” Nick and Nora’s Infinite Play-list has no expiration date on it; wryly named for the characters played by William Powell and Myrna Loy 75 years ago in The Thin Man, where sophistication breezily crossed with the screwball, Nick and Nora are expertly awkward Michael Cera and thinking-adolescent’s bombshell Kat Dennings. If you’re no longer a teen, it will remind you that you were smarter than you remember and shock you at how much smarter kids are now. No withering Hollywood satire is more affectionate than What Just Happened, starring Robert De Niro as a producer dashing from imploding deals to exploding divas to funerals for agents his teenage daughter probably slept with, multitasking to the point of psychosis. De Niro is vulnerable in a way we’ve never seen; when he succumbs to familiar, full-on homicidal De Niro rage, smashing someone’s head against a car, the scene is revealed as a reverie. This De Niro, in other words, fantasizes about being “Robert De Niro.” In their afterlives all these movies have flourished on their own distinctive terms, at odds with what any audience might have expected. The best example is In Bruges, dumped into a few theaters a year ago in the movie calendar’s wintry wasteland.  Written and directed by Ireland-by-way-of-London’s Martin McDonagh, In Bruges doesn’t become anything resembling a typical gangster movie until the last 15 minutes, which are the film’s weakest; until then, Brit hit men Brendan Gleeson and Colin Farrell lie low in the medieval tourist town on the coast of Belgium. Gleeson is fascinated by the city and rather enjoys the vacation, reading aloud passages from his guidebook to protégé Farrell, who is in despair after his first contract back home has gone grotesquely and tragically wrong.  Conversations between the two as they wander Bruges’ canals resemble who’s-on-first Abbott and Costello exchanges that mull everything from the caprices of the assassin’s profession to its consequences in eternity, leading to fights with Yank visitors who complain a little too forcefully about the cigarette smoke. “That’s for John Lennon!” cries Farrell in a flurry of expletives as he pummels one victim (who turns out to be Canadian). The two men await instructions from crime lord Ralph Fiennes, a monster with a moral code, which makes him that much crazier and more dangerous. Fiennes is superbly complex, as is Gleeson as the longtime foot soldier who finally receives an order he won’t obey. But the revelation of In Bruges is Farrell. Here he transcends his heartthrob hype and bad-boy press, as his man-child/killer is buffeted by the shock and shame of an act that can’t be undone, and he contemplates suicide even while trying to score with the local girls.

None of this is played as broadly as it sounds, haunted as the story is by the wayward destruction that’s brought the two men to Bruges in the first place. But the critical reaction to In Bruges when it came out was mixed, glib in a way the movie isn’t; the New York critics were especially clueless, reviewing less the movie and more the timing of its release, the characters’ unrefined political sensibilities, the conversations about purgatory that were dismissed as Tarantino Lite, and McDonagh’s background in theater that could only mean the movie was too “theatrical.” The New York Times sniffed that the movie was “an amusing trifle…diverting and forgettable,” by a “potty-mouthed” filmmaker. Over the subsequent months, however, enough people discovered the movie to generate an unyielding buzz. An adventurous audience noticed that every cliché McDonagh and his actors flirted with got a good kick in the shins, or maybe somewhere more anatomically sensitive, and that unlike Tarantino gangsters who fetishize the culturally trivial, the talk among Gleeson, Farrell, and Fiennes always returns to the characters themselves, advancing our understanding of them. This new audience also found the picture at once hilarious, melancholy, and moving. It may have realized what I have—that this is the movie of the past year I’m most likely to watch again.

Six years ago the Oscar winner was the crowd-pleaser Chicago. Maybe that galvanized filmgoing, and that year the TV ratings for the Oscars were off the charts, but I don’t remember it that way. What I remember is that in the tradition of duly forgotten ’50s award winners like The Greatest Show on Earth and Around the World in Eighty Days, six years later Chicago doesn’t mean anything to anyone. This isn’t to make an argument against big movies, by which we mean not only the scale but also the audience; of course that would be silly. Not long ago I watched with my son this decade’s biggest and one of the biggest ever, The Lord of the Rings, and was convinced by the full 12-hour DVD version that it’s one for the ages. Movies have a capacity for spectacle that no other medium does, and spectacles from Lawrence of Arabia to even The Dark Knight or Iron Man have proved they can be smart, too, as complex in character as they are wide in scope (well, almost). I don’t care about the Oscars’ ratings. I care about movies, and there are bad movies that have huge audiences and good movies that have tiny audiences; and the most radical notion of all is that a great movie—in defiance of the maxims of pop culture and risking accusations of elitism in saying so—is still great even if it has no audience, or is locked away in a vault as deep beneath the ground as the man on the wire is high above it.