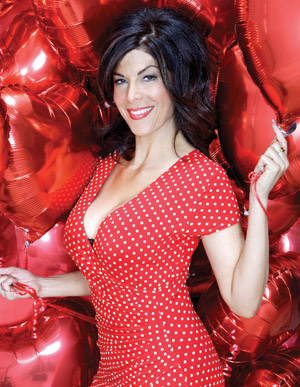 Long ago, when romance seekers hunted in the field (aka bars) rather than cyberspace, Lauren Frances organized Man Trap Packs—posses of single women who hit the town to find love. Their success prompted her to write, in 2006, Dating, Mating, and Manhandling: The Ornithological Guide to Men. For $180 an hour, Frances offers one-on-one dating and relationship sessions for men, women, and couples (she delivers similar advice en masse in a newly launched “Romantic Reboot” seminar). Frances, her own best student, says she’s dating a “special someone.” Here she shares some wisdom.

How does a single woman start the search? Write a list of everything you could possibly want in a partner. Then highlight everything you need. That’s your wish list. Everybody wants a man with water on the property who’s stunning, brilliant, and rich. But if he’s not monogamous, trustworthy, and kind, those other things don’t matter.

Where’s the best place to find men? If you go to the local bar, every other girl in her little black dress is going to be there, too. Go to man-friendly locations like the TED conference—constellations of brilliant nerds. Automotive conventions and sporting events are man festivals. Go to Comic-Con and wear a Wonder Woman outfit—if you’re willing to date a man who’s living in his mother’s basement. A good place to find a lovebird is Home Depot on Sunday afternoon. Ask a man how to operate a hammer, a wrench, duct tape—oh, anything, really.

Then what? Ask him if he would like to get a cup of tea sometime. Not coffee. Not a drink. Nobody has ever asked him out for a cup of tea. When he calls, he’s likely to upgrade the date to dinner.

So the guy doesn’t have to make the first move? Men have post-traumatic stress dating disorder: They’ve been shot down by so many women that unless you clearly signal your attraction, they’ll say “hello” politely in the elevator and after the doors close, think, “Damn, I wish she’d sent me a cue.” Compliment something he is wearing or doing. Say “Nice tie” or “Nice tattoo.” Stroke his feathers. Men are peacocks.

OK, so we’re on a date. What do I need to know? Men, unlike women, are very honest on first dates. They will give you the male secret lemon law disclaimer, telling you what’s wrong with them once. If you don’t listen, you’ve silently agreed to their terms. Men make agreements on the front end, not the back end.

How can I tell if he’s serious?