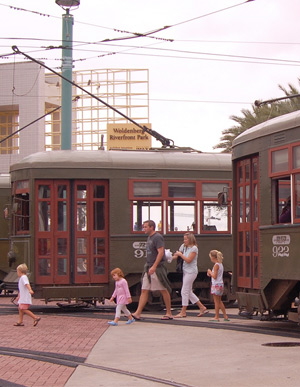 Our city has always been an audacious borrower. It strains the imagination to consider how many imports have gone native here: palm trees, Spanish mission architecture, Billy Wilder, surfing, Owens Valley tap water (technically stolen and on permanent loan). As part of our new CityThink initiative, we are inviting you, our readers, to suggest bright ideas you’ve seen in other metropolises you’ve visited or used to call home and to consider how they might improve our urban landscape.

I’m going to kick things off with a few ideas gleaned from my trip over the holidays to one of America’s—if not the world’s—great cities: New Orleans.

1) Play ball. Los Angeles needs a professional football team. Don’t believe me? Talk to a Saints fan. The city’s favorite sons have helped unite a fractured city. They have their own chant (Who dat?), a cool fleur-de-lis icon, and a beloved quarterback leading a fabulous team. Here’s hoping they get a Super Bowl ring, too. The Dodgers and the Lakers aren’t enough for a city our size.

2) Bring back a couple of vintage streetcars. Yes, we abandoned them by ’61, and that was a huge mistake. And yes, extending our lightrail and subway systems, however long it takes, is the right thing to do. But hop on the St. Charles line through the Garden District and you’re left wondering: Why doesn’t one of these run along San Vicente, Colorado, or Hollywood boulevards, to say nothing of the beach? If you think it can’t be done, visit San Pedro, which operates a restored Red Car every weekend along the shore. People pack onto the fake one at the Grove, even, and it goes about 20 feet.

3) Open a destination historic museum. New Orleans is home to the country’s official National World War II Museum. It’s phenomenal—and packed with visitors. Dedicated in 2000 as a tribute to D-Day, it has expanded ever since and is pouring another $300 million into new exhibits and buildings. (The Higgins landing craft that led the charge on D-Day were built in New Orleans, ergo the location.) The latest addition to the museum is a state-of-the-art theater that shows a 4-D film (think snow and rumbling seats) called Beyond All Boundaries, narrated by Tom Hanks and a host of other film stars. It covers the entire war in about 45 minutes. We’ve got plenty of great small museums in town, and between LACMA, MOCA, and the Getty we do well with the art, but it’s shameful that we’ve yet to get it together to build a museum devoted to the film industry (or the aircraft industry, architecture, or the city’s fascinating and complex history itself).

There’s also New Orleans’s curbside jazz and the huge and free New Year’s celebration that takes place in Jackson Square with fireworks on a river barge—but I could go on for a while. Have you seen anything large or small that you believe would make Los Angeles a more livable place? Let us know.