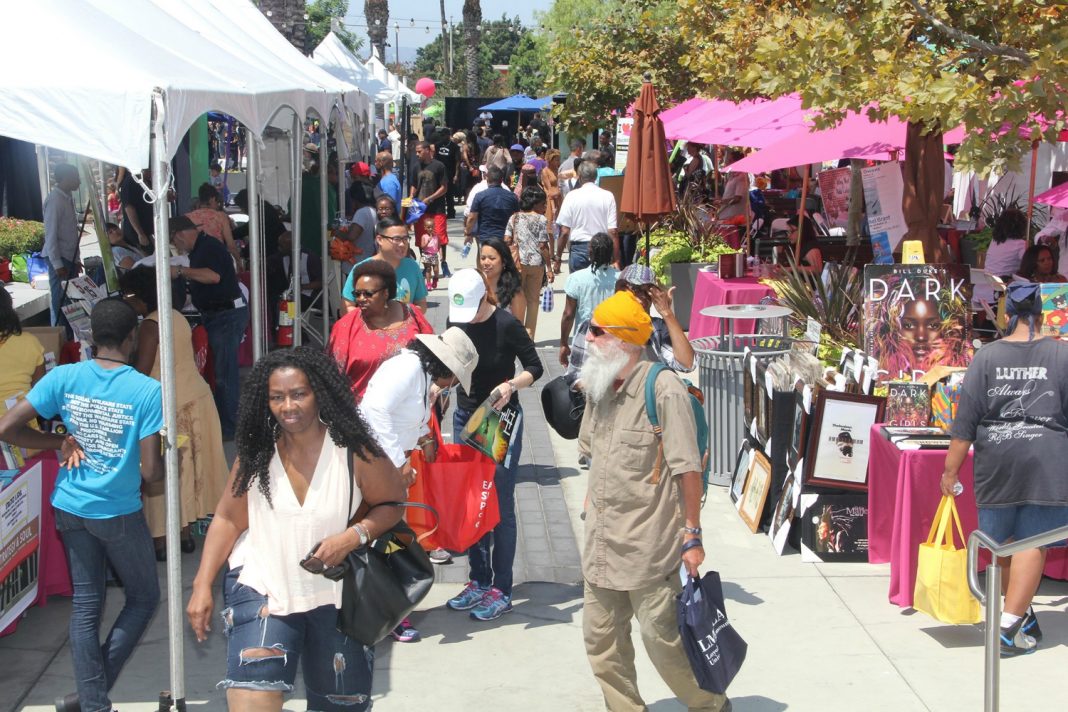 Between 1915 and 1970, the Great Migration saw approximately six million African American people migrate from the South to cities in the Northeast, the Midwest, and, of course, the West. It’s one of the most significant events in American history for a number of reasons, among them that it gave black people a chance to transform their destinies in ways that might not have been possible in the Jim Crow South. As a writer for Smithsonian Magazine put it, “By leaving, they would change the course of their lives and those of their children. They would become Richard Wright the novelist instead of Richard Wright the sharecropper. They would become John Coltrane, jazz musician instead of tailor; Bill Russell, NBA pioneer instead of paper mill worker; Zora Neale Hurston, beloved folklorist instead of maidservant.”

Each year, the Leimert Park Village Book Fair has a theme; at this year’s event on Saturday, August 25, that theme is “Tribute to our Southern Roots,” with a special focus on the Great Migration. “We really wanted to highlight that in our event this year with displays, exhibits, and guest speakers,” says Cynthia Exum, founder and executive director of the fair, now in its 12th year.

Exum has a personal connection to the chosen theme. Her grandmother traveled to California from Memphis, Tennessee, in the 1930s with her 11 kids. “I would hear stories about how they traveled on Route 66 and some of the problems they encountered on the road,” she says.

Saturday’s schedule also includes a walking tour that mimics the Great Migration, a presentation of vintage photos of migrants, and opportunities for visitors to research their own Southern heritage.

Exum grew up on Southern cooking, and when planning this year’s fair, she said to herself, “If we’re gonna do Southern, we’ve just gotta go all the way Southern.” On the main stage at 3 p.m., Greg Dulan of Dulan’s on Crenshaw and Jeanette Bolden of 27th Street Bakery will discuss the Southern cuisine of yesterday and today. At 4 p.m., pie makers including 27th Street Bakery, Gwen’s Specialty Cakes, Shae’s Cobblermania, and the Pie Hole will be offering free samples of some of the best Southern pies available in Los Angeles.

A dozen years in, Exum is excited the book fair is still going strong. “I’m very happy that the event has become a cultural tradition and institution in our community,” she says. “It’s not just for African Americans. It’s open for everyone to come and participate and to learn about the histories of our experiences.”

RELATED: A Massive Monument to South L.A. Is Inching Closer to Becoming a Reality