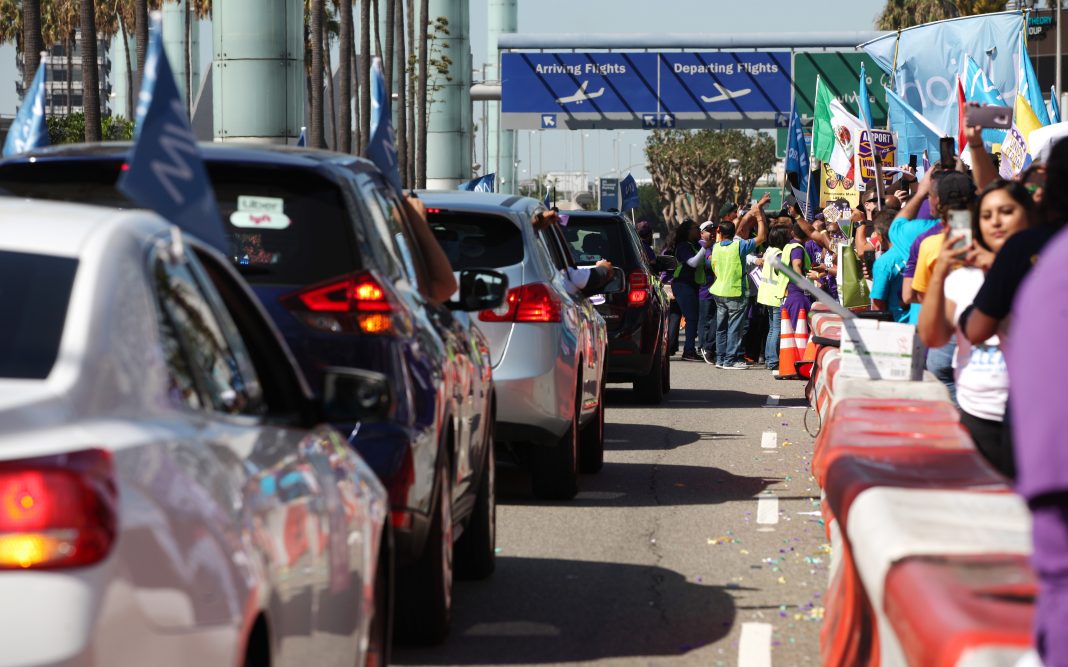 In theory, LAX’s new rideshare and taxi pick-up policy was meant to ease traffic and simplify the process of getting out of the airport. But when it actually went into practice yesterday, things went sideways fast.

Tuesday is considered a lighter day at LAX yet, even so, nearly as soon as travelers began arriving at the terminals, social media began to light up with complaints. Some were caught by surprise that they could no longer summon a car to pick them up curbside.

Others reported long waits to board shuttles, watching multiple packed buses come and go before being able to secure a spot, and even being removed from buses for trying to stand during the ride when no seats remained. Upon arriving at the LAX-it Lot, where all rideshare and taxi pickups now take place, passengers encountered disorganization and waits for cars that, some said, reached over an hour.

I’m at LAX. The new ride share system is a shit show! It’s going to take you about 45mins to get an Uber or Lyft. 🤬😡 pic.twitter.com/n60U1qx6UH

Fuck that new Uber situation at LAX. I’ll be driving myself and parking my car there because waiting 45+ min for an Uber to come to the designated Uber area is just stupid. 🤦🏻‍♂️

The Lyft line at LAX is Coachella? Idk what’s happening but I just bought a $6 water and The Killers are on the main stage pic.twitter.com/Vkea2PfJcA

the new offsite Lyft/Uber/taxi pickup system at LAX is a fucking disaster, i will make it my life’s goal to avoid ever flying out of this godforsaken place ever again

Look how bad these lines are @Uber @flyLAXairport , everyone is mad, drivers are confused, people are yelling. pic.twitter.com/7JHeT611RD

LAX just banned Uber/Lyft curbside pickups today. THIS is the chaos it’s created.
It usually takes me 10 minutes to get a curbside ride. Today most of us waited 45 minutes. How is this better?@flyLAXairport pic.twitter.com/cVCpJRXfCV

@uber 28 minute wait in line at LAX, after 10 min shuttle. Driver cites 90 minute jam to get to pick up. pic.twitter.com/cRdeiAupec

Was a terrible experience after a 13 hr flight ! No signage!, nothing to let you know how far away this #laxit is! busses are useless with large luggages … no signage to tell you what to do when you finally reach the #LAXit 👏🏼 #signage #communication #fail

This new #LAXit is TRASHHHHHHH! I’m sorry for all the @Uber driver, @lyft drivers and passengers. This is not a suitable solution!

#LAXit, day 2: Horseshoe is empty. Access to rideshare lot is so backed up that #LAX has blocked access to the Airport Return. Rideshare drivers are now taking to the streets around the hotels to get to lot. Complete & total chaos.

Hey @flyLAXairport, your new #LAXit system for @Uber @lyft is a TOTAL UNMITIGATED DISASTER. We ended up leaving our bus with everyone else in the middle of traffic (thanks understanding driver) and walked between the gridlocked vehicles last night. Took around 2hours to get out!

They need to tear down LAX and start from scratch.

LAX officials acknowledged that the roll out didn’t quite go as they had hoped.

“The goal is to have customers into cars in minutes. That didn’t happen today,” said Keith Wilschetz, deputy executive director of operations and emergency management for LAX. He acknowledged that teams at the airport “have some work to do.”

“We knew we would have to refine some things, but we know the refinements we have to make,” he said. Among those “refinements” was updating certain signage along the car and pedestrian paths to the LAX-it Lot, and improving overall traffic flow.

Rideshare operators think the problems go deeper than a couple of signs. In an open letter to LAX airport operations, Uber expressed a variety of concerns, including an increase in congestion on the street that drivers use to access their staging area, and that Uber was allotted only 37 stalls for pickup, when, the company estimates, it previously averaged 500 to 1,000 pickups per hour at LAX.

While the initial shock of the new system may wear off over time, it could be a long journey to true logistical paradise. Hopefully, it’ll sort itself out before 2023, when the whole operation is set to be overhauled yet again.