Home Fitness Feel Like Throwing an Axe Right About Now? We Have Some Good... 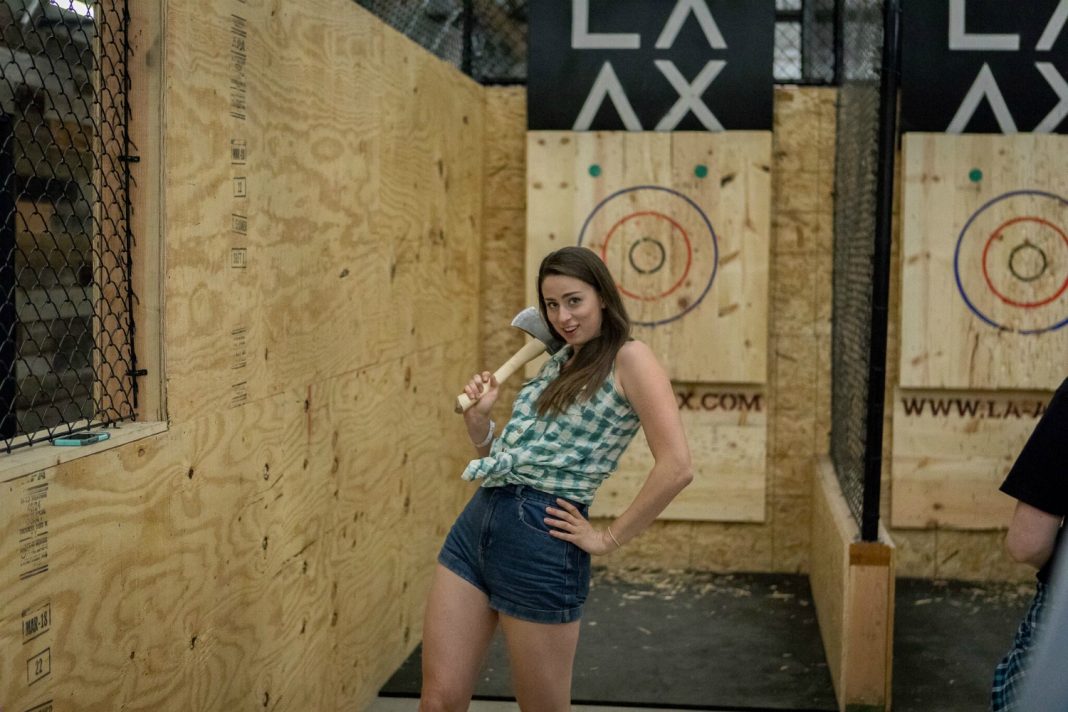 Flinging an axe into a target and watching the wood splinter is an oddly satisfying experience. It’s more visceral than violent—an antidote to the touch-screen tech in our lives. “It has no electronics, no anything, except throwing sharp objects at a wooden target,” says Joshua Chalom, CEO and founder of LA AX, an axe-throwing facility that just opened in North Hollywood.

Chalom is based in Toronto, where axe-throwing has been growing in popularity for the past eight or nine years. He wanted to get more involved in the business, and rather than opening another axe-throwing business in Canada, he decided to bring the sport to Los Angeles, where he lived in the 1980s.

Chalom and his cofounder, Jimmy Rose, recruited Chalom’s daughter Carly to take on LA AX’s operations manager position. She has been throwing axes competitively for the last four years and trained all of LA AX’s coaches. Carly Chalom is small in stature, but she’s the toughest competitor at LA AX. “It’s not a strength sport. It’s very much a finesse-driven sport,” she says. “As long as you get your technique down, being stronger or being taller or bigger holds no bearing on your ability to be successful in axe-throwing.” Her nickname, “Seven,” comes from a match early in her career, when she and a competitor went shot-for-shot for seven rounds, throwing big axes.

Don’t worry—as a beginner, you won’t have to swing a full-sized axe over your head. Carly explains: “Everyone starts out with a regular hatchet. It’s a small, one-and-a-half pound axe with a wooden handle.” Even throwing a hatchet makes you feel like a badass. The big axe is mainly used as a tie-breaker in league games, but if you want to give it a try, they’ll hook you up. 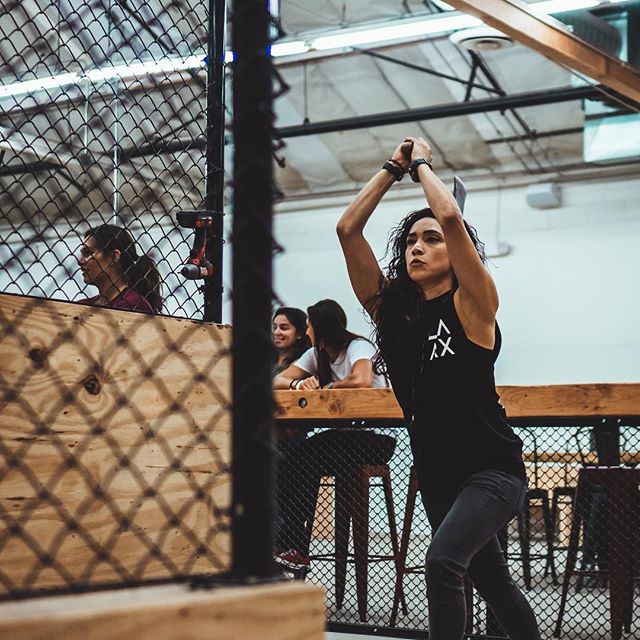 The LA AX team is positioning it as an alternative to hanging out at a restaurant or bar, but they do plan to serve alcohol. They’ve applied for a beer-and-wine license and hope to have the bar up and running by mid-November. If you think mixing alcohol and axes sounds like a disaster waiting to happen, the team is way ahead of you. Nobody’s going to have an axe in one hand and a beer in the other.

Carly says, “We’re an axe-throwing venue first. The whole bar thing is kind of just a bonus. Some people have huge reservations about axe throwing in general, so if they have a little drink, it kind of takes the edge off. Other than that, our coaches are able and willing to stop anyone from throwing who has been overindulging—whether that’s overindulging before they get into our space or overindulging at the space. We have very high standards of safety. We don’t want to jeopardize our staff or our customers, so if anyone is overindulging, they’ll be asked to sit out.”

Interested in giving it a try? Walk-in slots are available throughout the week for $25 per person per hour. You’ll be introduced to axe-throwing by a coach, and the coach will be there to supervise—and offer throwing advice, if you need it—the whole time. If other people walk in around the same time, you’ll be rotated in and out. For more throwing time and more coaching, private sessions are available for $40 an hour per person.

When groups of friends make reservations together, LA AX sets up a tournament-style event that lasts from two to two-and-a-half hours. Carly Chalom breaks it down: “The first half an hour is going to be coaching. Everyone’s going to learn how to throw an axe and how to be safe with it, and hopefully stick a few in the board. Then there’s a round-robin tournament. The people in your party will play a handful of matches and based on how they do in those matches, the coaches will take the top throwers and do a single-round elimination play-off. They duke it out, winner moves on, and you’re left with one champion of the night.”

LA AX also offers league play that conforms to National Axe Throwing Federation standards. League sign-up for the first season is closed, but a new season will begin in January. The $150 fee involves plenty of axe-throwing, and new throwers are welcome to join.

The LA AX team is excited to have the North Hollywood location up and running, and they plan to open additional local facilities soon. Joshua Chalom says, “We’re trying hard to find a place in the Culver City area. We’re looking at Riverside and also possibly Bakersfield for starters.”

LA AX is located at 7309 Coldwater Canyon Ave in North Hollywood. Walk-in hours are Monday through Wednesday, 6-10 p.m.; Thursday and Friday, 6 to 11 pm; Saturday, 5-11 p.m.; and Sunday, 4-9 p.m. Join the mailing list on their website for information about league registration.

RELATED: Sloth Barre Is the New Goat Yoga and We’ve Never Been More Into Exercise