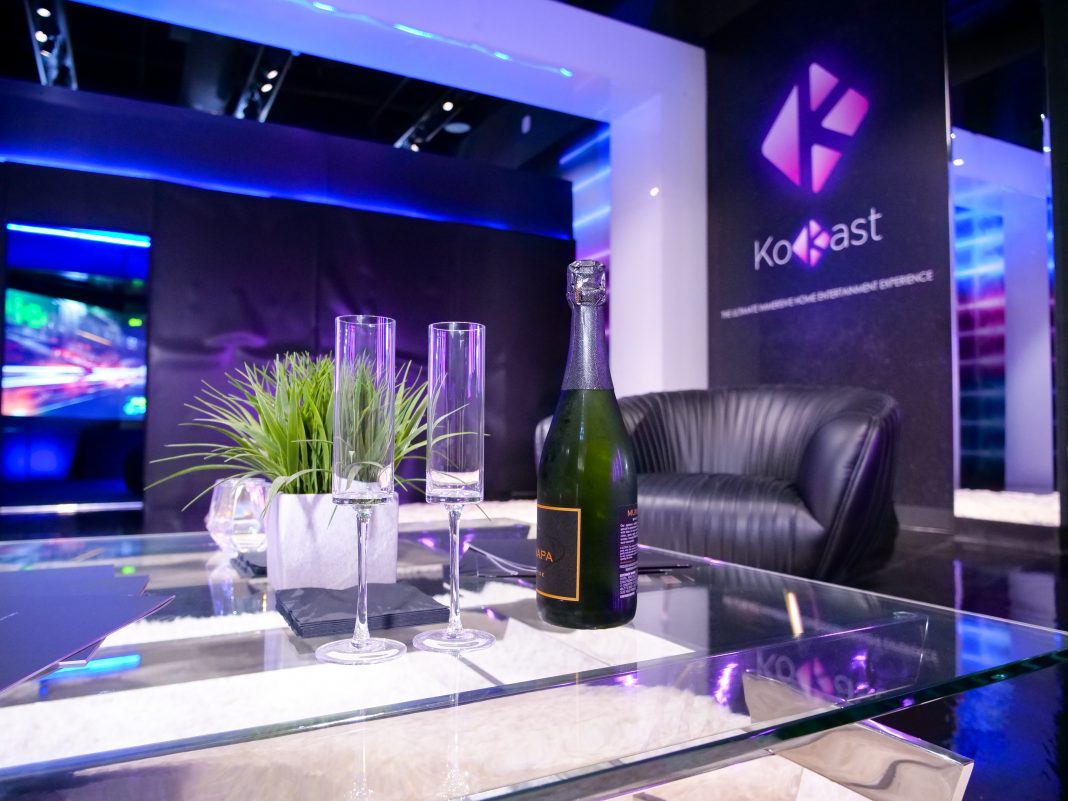 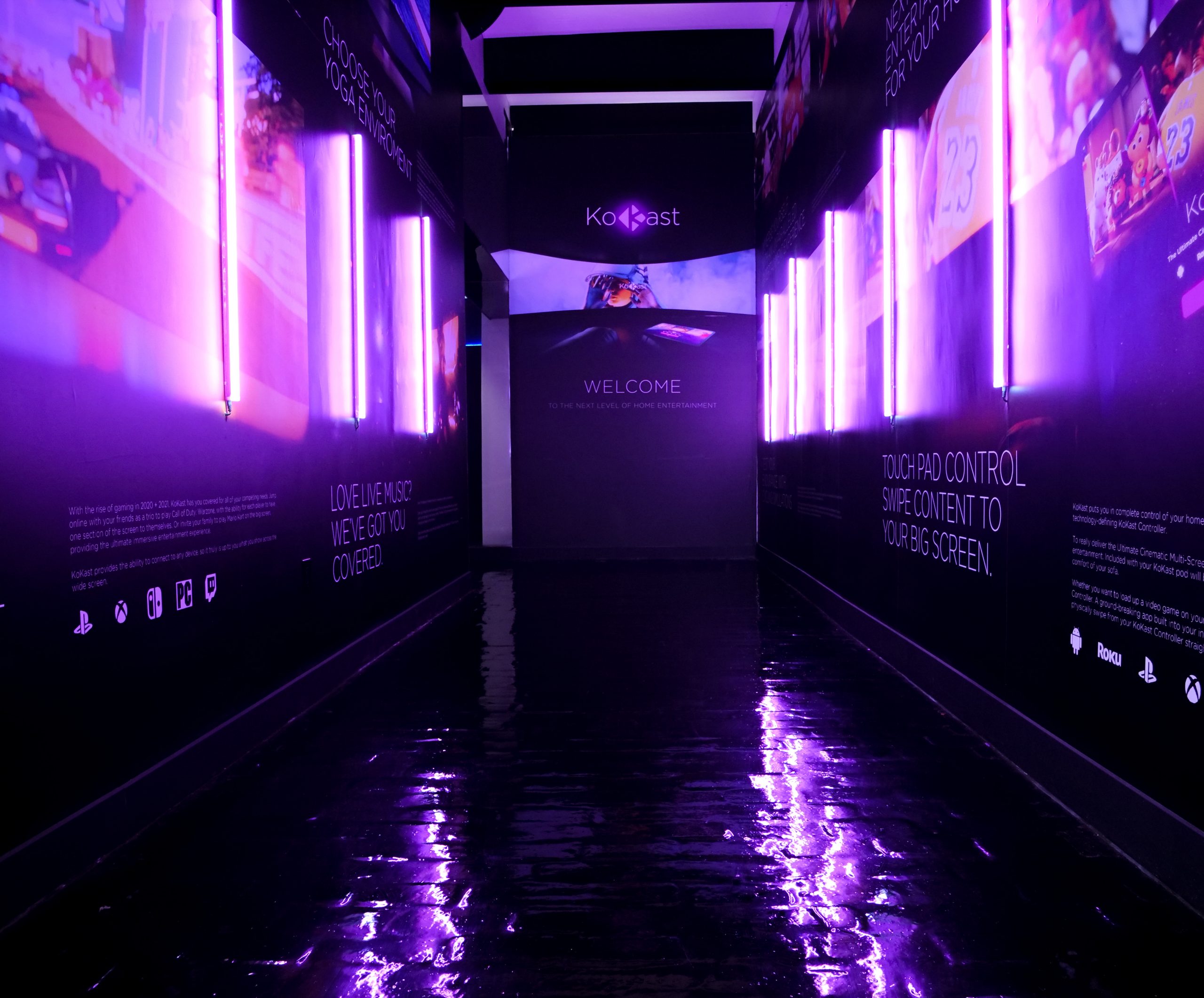 KoKast initially delivered the three-panel Nebula Class, which touts 6K resolution and 180-degree field of view, making it seem like you’re part of the event that’s depicted onscreen and avoids virtual reality headsets that can be disorienting. KoKast also offers a single-panel Performance Class pod that fits in a smaller space and still provides impressive functionality. They even provide a pod color choice to match your preference. 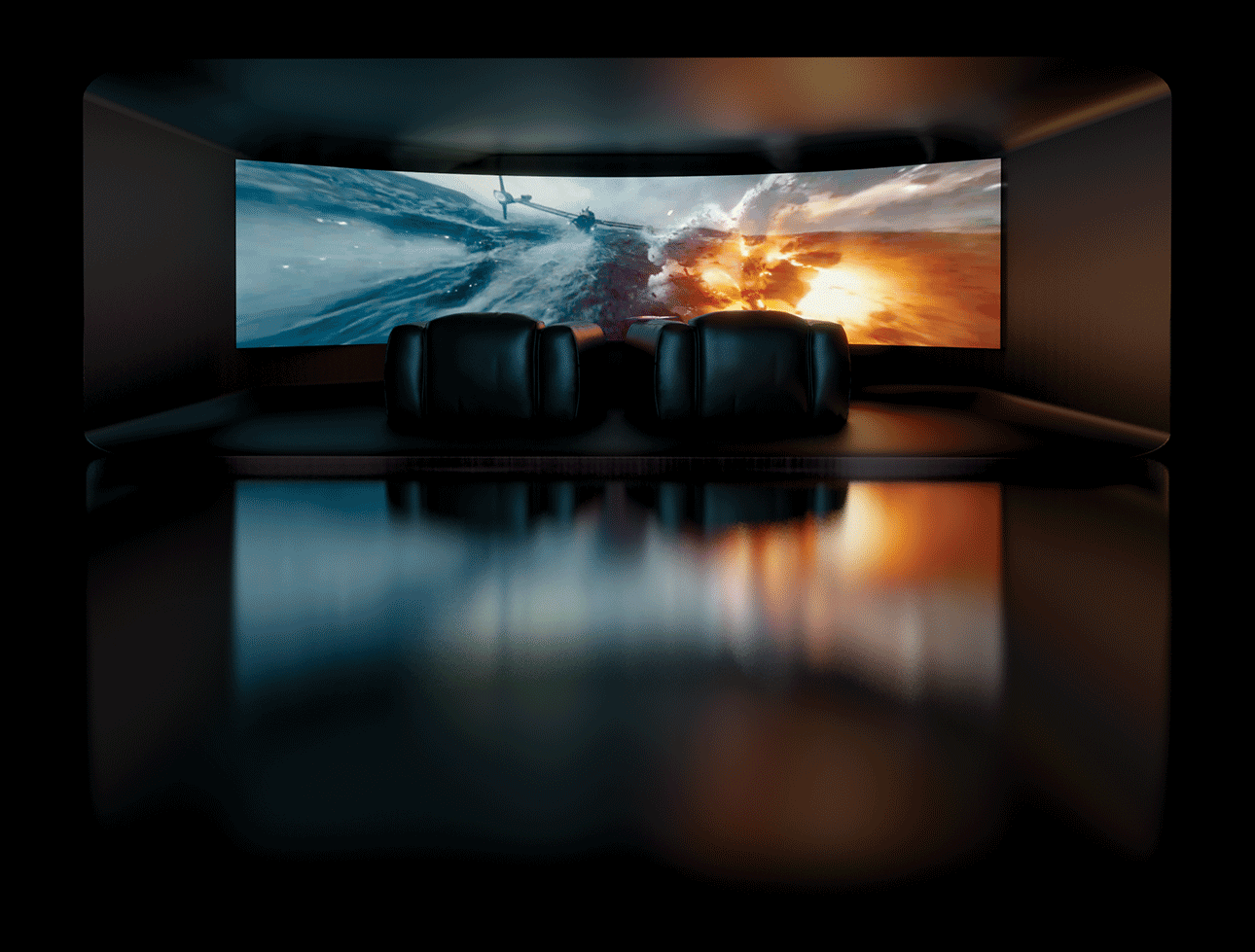 The KoKast Controller, an iPad with a custom app, utilizes “swipe tech control” that resembles remotes from sci-fi movies like “Iron Man” and “Avatar” and allows users to simply switch between different modes, toggle inputs, adjust volume levels, and control temperature and lighting in the room. The system can also integrate laser shows and smoke machines that sync up with StreamLive concerts. It’s like five remotes in one. The high end KLIPSCH sound system features 15 integrated speakers and a subwoofer that you can feel in your bones. Brace yourself for when that base drops!

According to Thore Weber, KoKast’s CEO for North America, “our first prototype had 12, 55-inch TVs, which were all synched up”.  Weber recalls, “Each of those had a matrix box attached to it and we were running content, different pop-ups… We had one week to build that prototype. We got it done.” After showing proof of concept, they developed a more streamlined product that goes way beyond concerts. “This is really where we came up with the different modes,” Weber says. 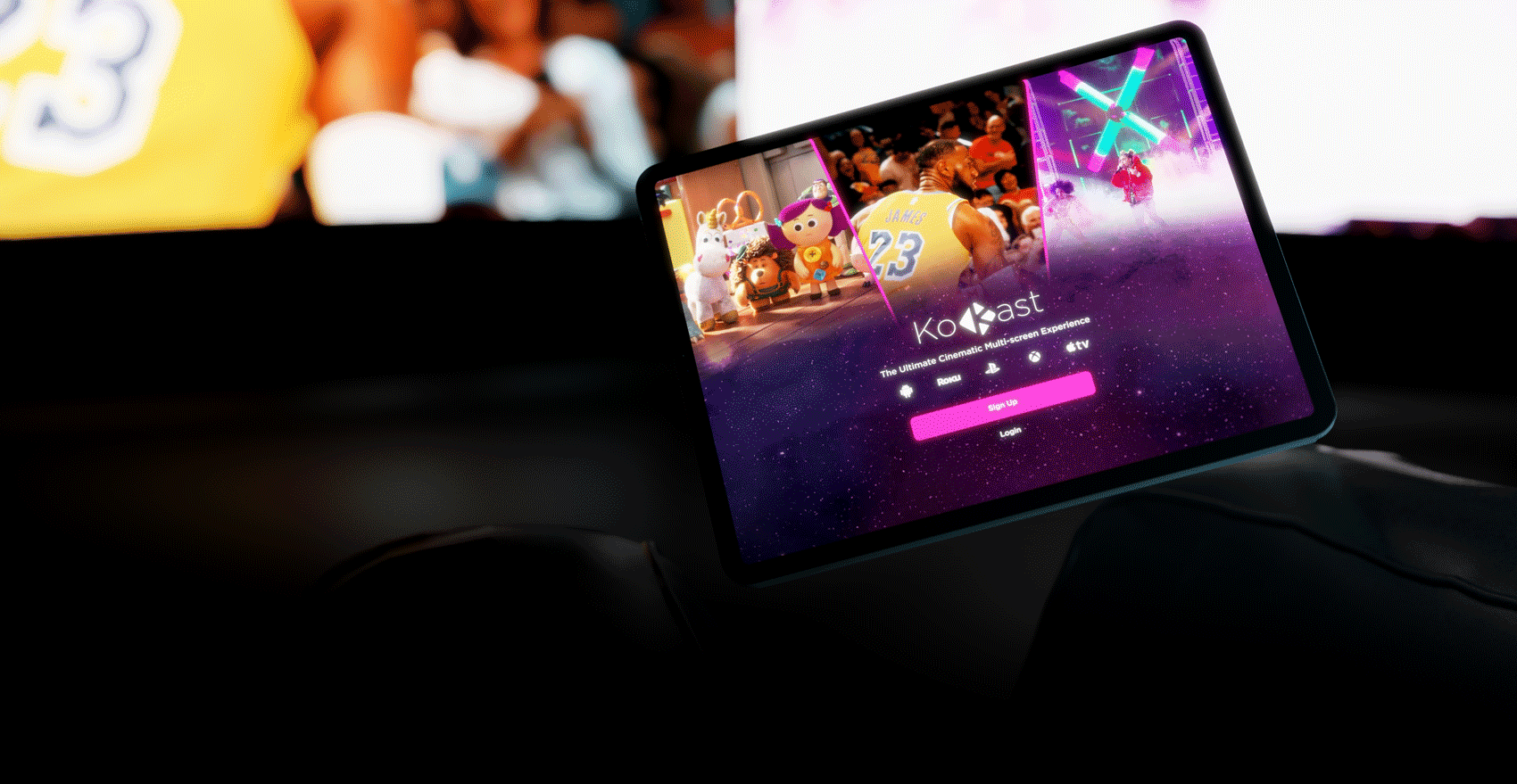 TV Mode lets people watch TV, movies or content from apps like Hulu and Netflix on one screen. “The movie that you have on your TV at home has black bars on the top and the bottom,” Weber says. “With our Cinematic Mode, it automatically scales that so you’re never getting that. Pull the curtains and it’s just as you had a normal home movie theater.”

Triple Mode lets users assign inputs to three different screens. That could mean the nightly news, sports or gaming systems like PlayStation and Xbox. People can even display the same video game on all three screens and have 12 people playing one game simultaneously, in the same room, which is great for family and friends.

“A lot of NFL games run simultaneously,” Weber says. “Instead of having to watch a game and then switch over, you can run three games and switch the audio.” People can also watch up to three different feeds of the same game simultaneously using channels like ESPN and streaming devices like Roku or an Amazon Fire TV Stick. “Different platforms all provide their own coverage, so you get the different angles,” Weber says.

The Nebula Class also has business applications. “I can have a PowerPoint presentation I worked up on the left-hand side, I can have an Excel spreadsheet in the middle, and watch news on the right,” Weber says. “When you have toddlers, you can put on the morning cartoons and put that on the speaker system; you can watch the news and do work with separate headsets. It allows for a huge diversity.” There’s only one audible audio channel, but simultaneous Bluetooth sound is possible on two other inputs.

“What we are trying to do is not to dictate what people are to do with our system,” Weber says. “We’re providing you with the tools and then you use it how you want to use it.” For example, a screen popped up during a showroom demo and we started traversing down a tranquil woodland path. Users can easily match that with a treadmill and treat it like a hike or incorporate a stationary bike like a Peleton for “mountain biking through the Himalayas” feel. This could also be a jumping off point for some meditation, to do yoga “in Fiji on the beach” or to read a book in “nature.”

Weber points out that some home entertainment companies specialize in specific areas like fidelity, audio or brightness. “It shouldn’t just be a screen that displays a beautiful picture and has good sound. It should do much more than that,” he says. “You should give the customer a lot of flexibility to do with the system what they really want.” 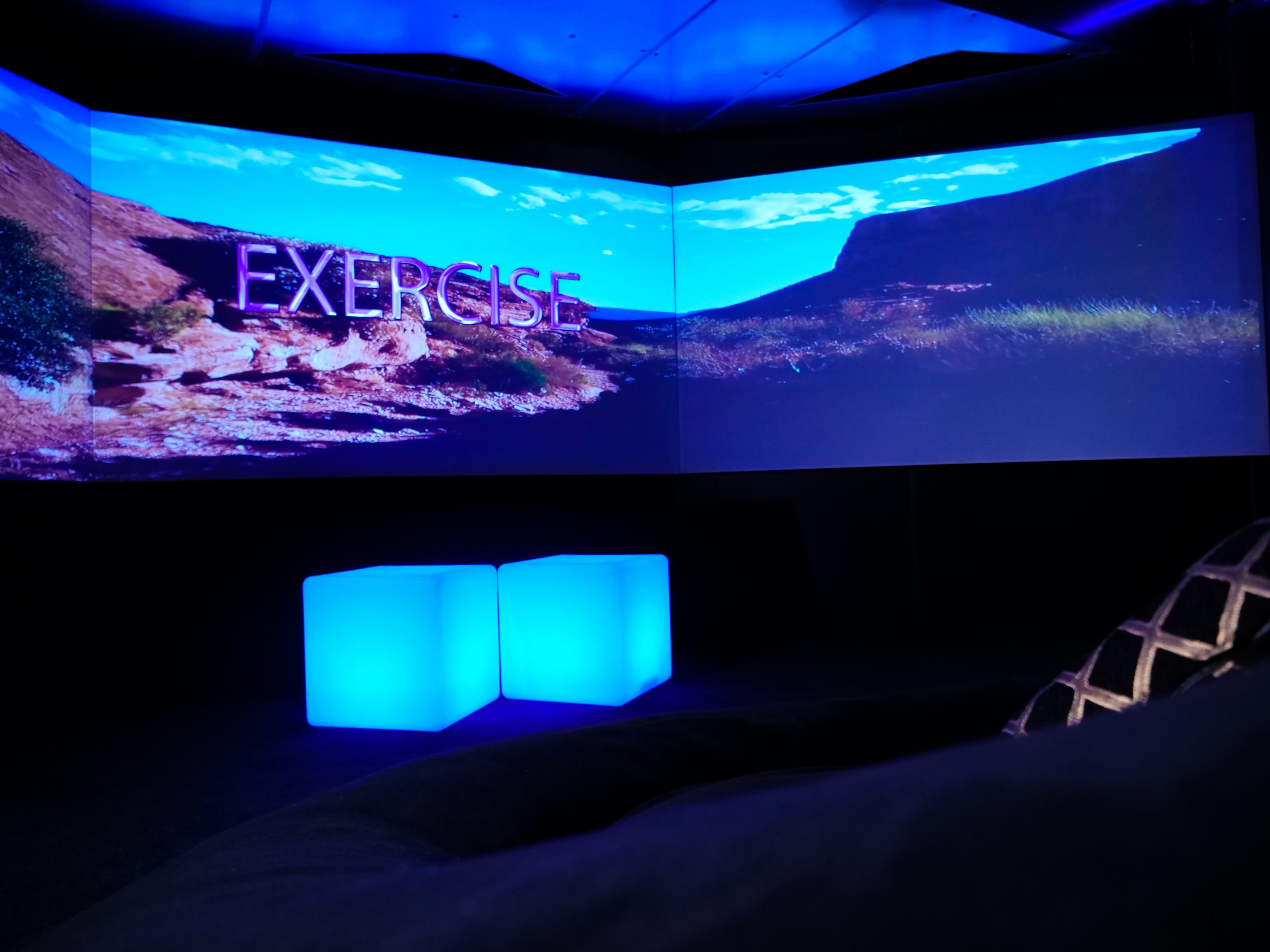 KoKast appeals to a higher end demographic that hungers for new technology. “They want to be part of the transformation we’re trying to lead, which is a fundamental change in how we perceive home entertainment,” Weber says.

So far, KoKast operates showrooms at the Westfield Century City mall and in Melbourne, Australia. Weber hopes to expand to markets like San Francisco, Las Vegas, Scottsdale, Houston and Austin, working to “ensure the products delivered are to the standards expected by our customers.”

As part of their two-year warranty, KoKast has a full-service support team that makes site visits. An annual subscription covers all software and hardware upgrades, so their technology stays current. “Our technology’s been designed in such a way that when the new chip sets come out – which we know are going to come out – we can replace a section of it and give you the newest technology available,” Weber says. “That allows us to really have a customer base that doesn’t have to go out every five years and say, ‘My neighbor now has a better system than I do. I guess I need to buy a completely new entertainment system.’” Each subscription also includes a one-time pod relocation, whether that involves moving homes or simply changing rooms.

The pandemic dramatically shifted how people perceive and use home entertainment, and of course increased time at home. “We’ve clearly seen a huge trend upwards,” Weber says. “A lot of applications are competing for attention at the moment. What we are providing is an environment where you can really immerse yourself.”

“Immersive means submerging you into whatever you are doing,” Weber says. “A lot of times when we project images and content, it can be easy to find that distance between the narrative that’s being told by these really creative people that come up with these fantastic TV shows, movies and content.” He adds, “What we’re trying to do is really make you feel like you’re in that story.”

Nebula Class starts at $60,000, though that number will probably increase to $80,000 once KoKast introduces their next-gen version that’s fully curved, one big screen with a completely seamless display. A Performance Class pod costs $18,000 – $20,000. Annual subscriptions run $1,200. 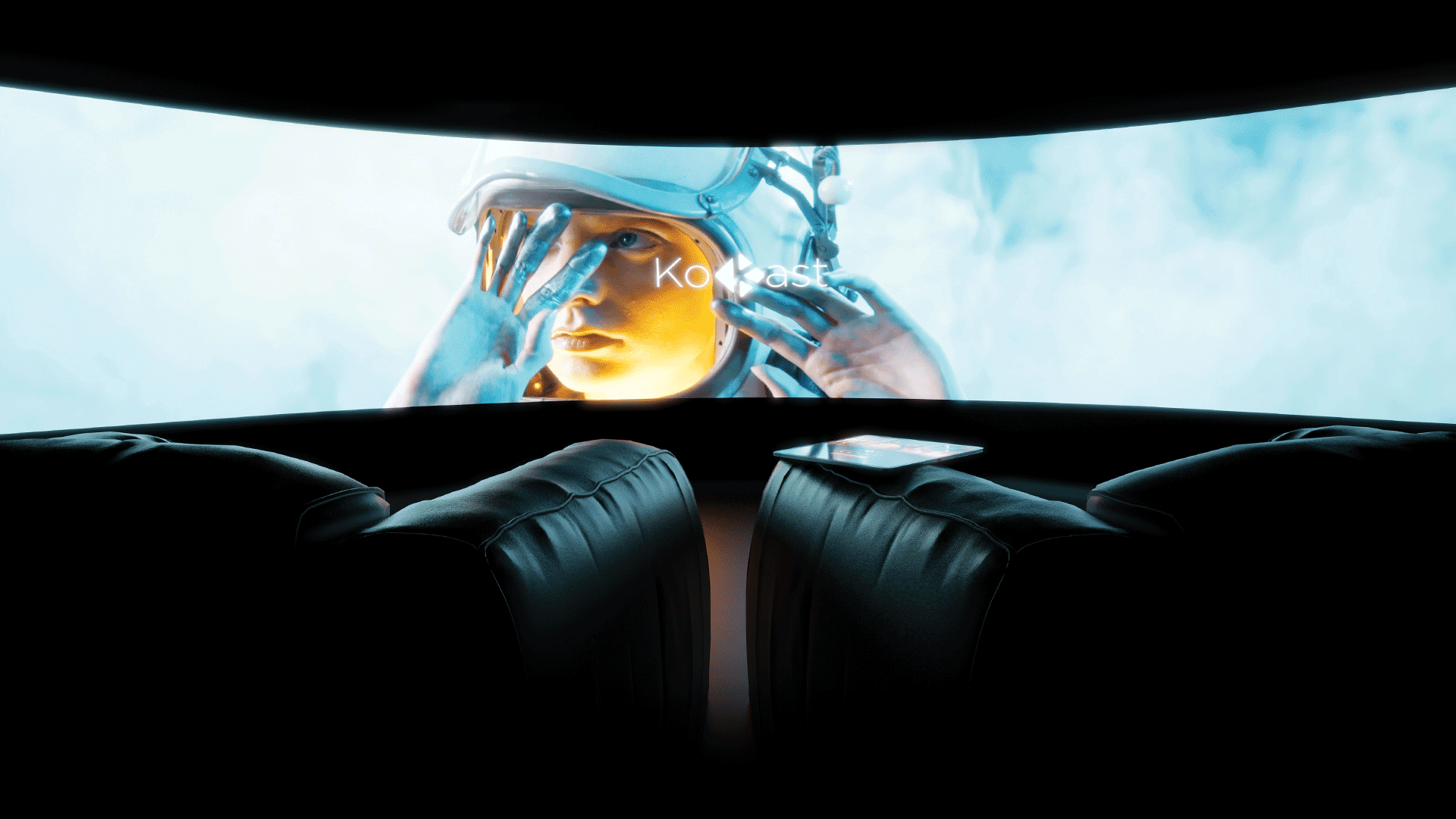