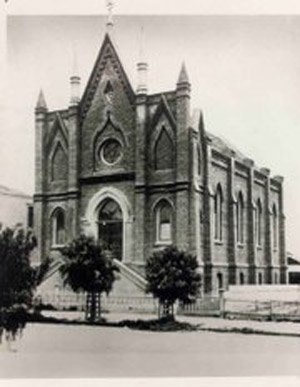 I Love You, California is in a long line of patriotic art created by Jewish Americans in an effort, according to some historians, to assimilate into American society. This is further examined in film historian Neal Gabler’s 1988 book, An Empire of Their Own: How the Jews Invented Hollywood. But the history is older than the birth of Hollywood. This is excerpted from an exhaustive timeline by Reva Clar. “The first Jew to reach the pueblo of La Reina de Los Angeles was Jacob Frankfort, a merchant tailor who arrived in 1841 with the Rowland-Workman party. By 1850 when Los Angeles was incorporated as a city and the first United States Census was taken, eight Jewish young men were listed, all of whom resided in Bell’s Row at Aliso and Los Angeles Streets, now the site of a Federal Building.” More information.