Home Uncategorized How Can the Los Angeles Film Festival Further Expand Its Footprint? 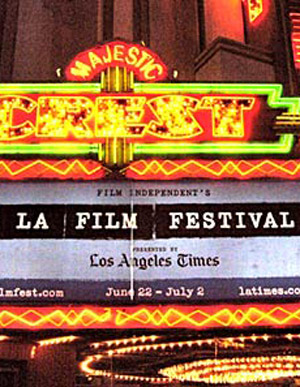 In the coming years I would like to see further revitalization of the downtown theaters on Broadway. LAFF, Film Independent, and the city of Los Angeles should pool resources to establish a sort of flagship venue where they can host premieres and events throughout the year. It breaks my heart that so many beautiful landmark movie palaces sit dormant (or as Pentecostal churches) in the middle of this country’s movie industry. I attended the premiere of Exit Through the Gift Shop at the Los Angeles Theatre, and the pure elegance and scale of the space made it a truly special moviegoing experience. While we focus on the next biggest 3-D screen technology, we should also consider the experience of entering a space: from the street, to the lobby, to the auditorium. There is an amazing opportunity to use what already exists and bring some light into the dark.

Personally, I think the glory days of film festivals are over. Why? Because it’s impossible—without spending a great deal of money—to create urgency around seeing a film. There was a time long, long ago when we would drive 100 miles to a festival showing the new film by Godard or Fassbinder because that was our ONLY opportunity to EVER see it.  Those were the days prior to the invention of video, let alone the advent of PPV, VOD, Netflix, and the dream of a thousand channels. Film no longer exists in an age of mechanical reproduction. Instead this is an era of hyper-digital reproduction, instant and endless. We now have so many opportunities to see a film that our motivation to do so wanes. Forget driving 100 miles to see Alphaville or Ali: Fear Eats the Soul. To drive ten miles downtown to see Cyrus or The Kids Are All Right seems like, well, just too great an effort.

What is to be done?

Of course it’s possible to create a false urgency and sycophantic aura around moviegoing. Studio marketing departments do this extremely well, weekend after weekend after weekend. Occasionally a film takes over culture and “everyone” must see it, e.g. Avatar in 3-D. Less occasionally this happens with smaller films, e.g. Slumdog Millionaire. What defines this moment? The feeling that to be conversant in one’s culture you NEED to see it. I do believe that certain films find urgency and relevancy within specific communities—and probably more quickly and with greater impact today than ever before through viral marketing and virtual networks. In a city as spread out and diverse as Los Angeles I can imagine, therefore, a festival that has not one footprint but several and that takes steps leading away from a vital center. This means going to the communities, not relying on the communities coming downtown. In other words, stop the quest for critical mass. It can’t be done in Los Angeles (the only thing that brought us together was that which tore us apart: the 1992 riots). Disperse and fragment, don’t unify. Make events singular, not collective. Find relevance, not fashion. And, finally, be satisfied with the right audience, not a mass audience. It’s time for a Los Angeles Festival—a truly pan-L.A. festival—to be outward bound with an overture as plural and diverse as the city.

The Los Angeles Film Festival will be held June 17 – 27. Go to lafilmfest.com.