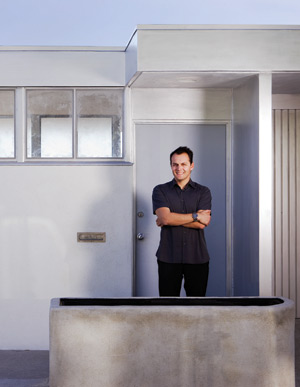 When Richard Neutra’s cantilevered Kun House went on the market a few years ago, the listing agent advertised the 1936 property as fully restored and close to original condition. That was a joke, midcentury turnaround artist James Rega soon found out. “There was recessed can lighting,” he recalls. “The previous owner painted the railings and casements silver without first stripping the wood. There was water and termite damage.”

Rega bought the 1,700-square-foot house in the hills near Hollywood and Fairfax anyway, and on this boiling afternoon, in a dust mask and spattered T-shirt, he surveys the residence he’s turned into a construction site. Light fixtures have been removed, workmen are nailing wooden planks to restore the porch, and the bathroom has been stripped to its studs. Rega’s speech is frenetic as he launches his tour on the roof deck. He stands on its edge, a single iron bar the only barrier between him and the steep hillside. The previous railing was terrible, he says. “Completely destroyed the views. Neutra’s original railing would never be up to code today.” But Rega is aghast at the prospect of installing the glass barrier now mandated by the city building department.

A former professional musician, Rega, 35, has the physique and energy of a young athlete; a receding hairline is the only hint of encroaching middle age. Rega co-owns the Kun House with his business partner, Gerald Casale, a former member of the band Devo. He has also purchased a unit in Rudolph Schindler’s 1923 El Pueblo Rivera in La Jolla and a modern home in Palm Desert built in 1959 by the Alexander Construction Company. Rega is one of a few wealthy preservationists who purchase, meticulously restore, and sometimes sell midcentury L.A. homes the way others snap up Warhols or Picassos. These collectors are driven more by their passion for a project than by financial gain. They find discontinued materials to match original plans. They wade through blueprints and archival photos. They seek out original owners, architects, and craftspeople. In an economy marked by crisis and uncertainty, they fulfill a role that public and institutional groups may not have the resources to take on.

“It’s impossible for nonprofits and governments to own these houses and be able to repair, restore, and maintain them,” says Linda Dishman, executive director of the Los Angeles Conservancy. “Private individuals who undertake caring for architecture are incredibly valuable and build a legacy.”

When a house of architectural significance is in danger of being demolished, real estate brokers—at least those who care about such things—call on buyers like Rega to spare it the fate of, say, Schindler’s 1928 Wolfe House on Catalina Island (razed in 2001) or Neutra’s 1962 Maslon House in Rancho Mirage (demolished in 2002). When faced with a possible teardown, Brian Linder, an agent who specializes in architectural properties, says Rega’s number is one of the first he dials. “I want [the home] to fall into the right hands,” says Linder. “I want to hand it off to a steward who will lovingly restore it.”

Rega spent months tracking down Vitrolite, a heavy opaque (and obsolete) glass for the Kun bathroom. “Trying to replicate it or have it made was a dead-end street,” he says. “I could have just used painted or laminated glass. That could have worked, but you see it in every clothing store in the Beverly Center.” Rega eventually located a Vitrolite stash in Pennsylvania. “It was salvaged by a religious cult that scraps old buildings,” he says. He estimates that the cost of buying the slabs of glass, cleaning them, shipping them, and having them installed by “the only Vitrolite guru still alive in the U.S.” will come to $35,000. “If I used tile or laminated glass, I could have done it for $5,000. But if you put those materials side by side, the difference is night and day.”

What constitutes a legitimate restoration? Purists worship the historic fabric of these homes and would like to see them restored to their virgin state, devoid of any modern convenience that was added after they were built. Others are less orthodox, choosing to rehabilitate the living and dining rooms and to update the kitchen, bathrooms, and other spaces in which technology has made the greatest strides. Rega falls closer to the former, although he acknowledges that sacrifices must sometimes be made. “James is a rarity,” says Neutra’s architect son, Dion. “He wants to get back to the original concept rather than update it or make today’s version.”

Born and raised in Pacific Palisades, Rega attended the Neutra- and Richard Alexander-designed Corinne A. Seeds University Elementary School at UCLA, though he was too young to appreciate the architecture. When he was 12, his family moved to Chile, where he remained until his early twenties. While there, Rega invested in a successful pharmaceutical company and on coming back to the United States designed toys for Mattel before turning to music as a composer and performer.

Five years ago Rega became seriously ill with a form of toxic mold syndrome contracted from the air-conditioning system in his music studio and loft. He read architecture books during his convalescence. “I started out selfish and hedonistic,” he says. “I was sick and miserable and thought I’d rather live in a tent than a shithouse. I decided I’d either build something new or save something.” He found a lot of the new construction in L.A. to be “embarrassing.” After a trip to Europe, where he was inspired by architecture in Berlin and Barcelona, he decided to pursue the “level of perfection and detailing” he saw there. “I’m trying in my own way to travel to another period, to re-create a reality that’s different from the current one,” he says.

The Kun House cost Rega and Casale $2 million when they bought it in January 2008. (The home is also famous as the project that launched the career of the late architectural photographer Julius Shulman.) Rega estimates an additional $1 million for the restoration. That brings the cost to $1,732 per square foot, in a neighborhood where prices are closer to $600. Though pedigreed architecture typically commands a premium, the final cost for the Kun House seems nearly impossible to recoup. Yet Rega remains hopeful. He points to Case Study House No. 21 by Pierre Koenig, which was auctioned in 2006 for nearly $3.2 million despite a property appraisal of less than $1 million.

That was at the height of the real estate boom, when architectural provenance could propel a home’s sales price into the stratosphere. Today’s market is far less kind to sellers. Neutra’s Kaufmann House in Palm Springs failed to sell at auction last year. Schindler’s How House in Silver Lake, with an asking price of nearly $4 million, was listed for more than a year and didn’t sell.

As Rega and his fellow collectors can tell you, even with all the costly restorations, masterpieces by the likes of Neutra and Schindler are undervalued. Rega points to a record-setting $28.3 million auction price for a Dragon chair by Irish furniture designer and architect Eileen Gray that sold in February. “If an Eileen Gray chair can sell for that much,” Rega asks, “why shouldn’t one of her houses be valued similarly?”  Craig Krull, who owns the eponymously named gallery at Bergamot Station that features architectural photography, agrees. “Something Neutra designed sitting next to a piece of junk should not be priced the same just because they have the same square footage or share a zip code,” Krull says. “It’s ludicrous.”

Today Rega’s now-mold-free studio in Hollywood is his base as he bounces from house to house, overseeing construction details. He doesn’t seem too concerned with getting a return on his investment. He’s not even sure he’ll wind up selling any of his houses; in fact, he’s interested in acquiring more. “It could belong to a museum one day,” says Rega of the Kun House. “Or I may live there and open it periodically to the public.” Rega has begun to rope others into his obsession. When Rudolph Schindler’s 1939 Van Dekker House in Woodland Hills—in need of a massive rehab—went up for sale this year, Rega persuaded his friend Josh Gorrel to buy it, promising to kick in some elbow grease with the restoration.

Lately Rega has been reaching beyond architectural rescue. He’s in the initial planning stages to rebuild the 1935 Northridge home Neutra did for director Josef von Sternberg, which was demolished in 1971 to make room for tract housing. He’s also commissioning a Le Corbusier residence that never made it past the blueprint stage. Rega doesn’t see a contradiction between a faithful restoration and rebuilding from the ground up. If Frank Lloyd Wright’s Fallingwater is the Citizen Kane of architecture, then perhaps the von Sternberg house is the latest Batman sequel. “I’m not rebuilding Fallingwater,” he says.