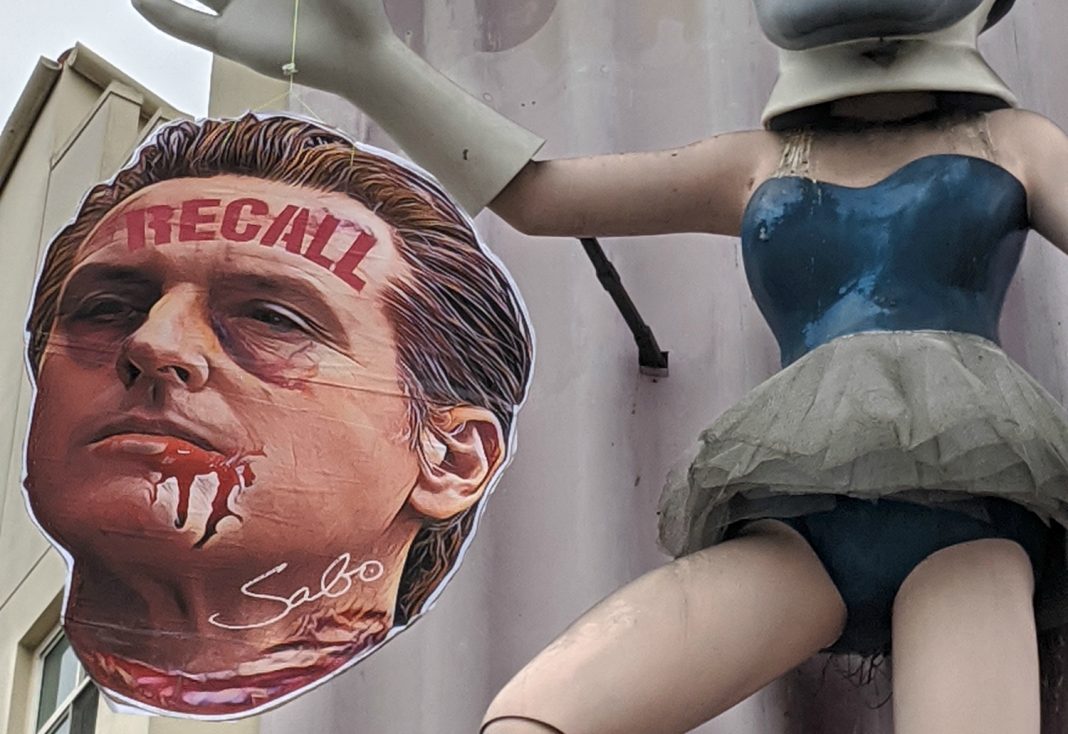 On Tuesday evening, a gruesome, six-foot-tall depiction of Newsom’s severed head—bloodied with the words “RECALL” scrawled across the Governor’s forehead—was hung at the corner of Main Street and Rose Avenue, where the City of Santa Monica intersects with Venice Beach. It dangles 30 feet in the air, attached to the hand of artist Jonathan Borofsky’s colossal Ballerina Clown sculpture, which was originally erected in 1989.

The stunt comes as pockets of California—mainly in more conservative enclaves—and members of the business community grow increasingly frustrated with the state’s coronavirus safety measures, considered some of the most stringent in the country. Earlier this week, Disneyland Resort president Ken Potrock attacked Newsom’s newly announced protocols regarding the reopening of California theme parks calling them “arbitrary” and “unworkable.” Disney CEO Bob Iger resigned from Newsom’s COVID-19 economic task force earlier this month after the company announced it was planning to lay off 28,000 employees. Furthermore, a petition calling for Newsom’s recall has also been circulating although it is unclear how many signatures the effort has received because it’s intended to be printed out and signed, rather than simply signed online like many petitions in the digital era.

But California’s measures appear to have helped slow the spread of the virus. Recent reports have shown that California is among five states that are seeing a decline in the number of new coronavirus infections while much of the rest of the country are seeing increases. A spokesman for Newsom’s office did not return a call or email seeking comment.

In recent years, career provocateur and Proud Boys fan Sabo has become known for similar stunts. He almost exclusively targets Democratic politicians and the communities that support them. In 2018, he altered a billboard that was advertising a Halloween remake, swapping out an image of serial killer Michael Myers and replacing it with one of Maxine Waters. Later that year—playing off the Oscar-nominated Three Billboards Outside Ebbing, Missouri—Sabo hijacked three billboards just days before the Academy Awards in Hollywood and attacked the entertainment industry for allegedly shielding pedophiles. In 2017, he went after then-candidate Newsom by hanging “do not disturb”-style door hangers mocking Newsom just days before a fundraiser was set to take place at the house of actress Reese Witherspoon.

Want to Bet that Newsom Gets Recalled? Bookies Say the Odds Aren’t Good