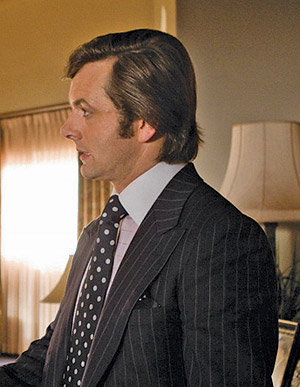 You likely have never heard of Port Talbot, Wales. It’s a small, frigid industrial town that suffers from poisoned skies, bleak winters, and the constant lashing of a soapy Atlantic. Children raised there, however, dream of arriving in Hollywood. Those fantasies have dark realizations. Peg Entwistle, an aspiring Broadway actress, was born in Port Talbot. In 1932, she found fame by becoming the only suicide to leap from the Hollywood sign. Richard Burton was sharpened to an edge against the town’s rough streets. You can see that fierceness etched onto the screen in Look Back in Anger and Who’s Afraid of Virginia Woolf? Anthony Hopkins is another Port Talbot fugitive. How many serial killers has he played, not to mention Hitler and Quasimodo? Finally there is Michael Sheen, who in the last two years has appeared as Tony Blair in The Queen and now David Frost in Frost/Nixon—two of the most likable, optimistic men one could hope to meet. Which raises a question: What the hell went wrong with Sheen?

“I don’t know,” says the actor, smiling while waiting for an order of hash and eggs inside the Santa Monica deli Izzy’s. “There certainly is a darkness where I come from. It is a very male place, very dirty place. You can see that dark energy in Burton and Hopkins. But there is also in me a desire, I guess, to overcome that town.” Sheen looks nothing like Frost or Blair, save for the former prime minister’s Cheshire cat grin. He has curly hair and elfin features (Sheen could have been Elijah Wood’s stunt double in Middle-earth) and the quickness, over gulps of hash and coffee, to jump eloquently between subjects—America’s elections, the Iraq war, soccer fanaticism, fornication.

“So, did you fornicate last night?” I ask. I feel I’m on safe ground here: In Frost/Nixon the same question is posed by the president to throw off his adversary just as the cameras start to roll.

“Aha!” Sheen says and laughs. “I did not. Actually, I haven’t fornicated in some time.”

Sheen followed a girlfriend, Kate Beckinsale, out to Santa Monica in the late ’90s when Beckinsale began landing roles in movies like Pearl Harbor. The couple had met in London’s theater scene, where Sheen made his debut in 1991 at the age of 22, alongside Vanessa Redgrave. Playing the lead in productions like Peer Gynt and The Dresser, he had been a hit with critics, though an outsider among his peers. “I came from the working class,” Sheen says, dispatching the last of his breakfast. “I never felt my pedigree was anything like the people I found around me in London.” Joining Beckinsale in Santa Monica—warm, sunny, lacking steel mills—Sheen was on Mars. Until, that is, he found Izzy’s. “I grew up in a café culture,” Sheen says, surveying the wide borscht veld around our table. “I used to love spending time in what’s the equivalent of your diners. Arriving in Santa Monica was very frightening. The idea of leaving family for a long time was scary. But coming in here every day made me feel I had some sense of a home—knowing the same people, ordering the same meals. Izzy’s is where I had my first corned beef hash.”

As Beckinsale’s career took off, Sheen’s sputtered. “Perhaps the scariest thing of all for me,” he says, “was what Hollywood itself represented—the desire for fame, money, and success, all over the desire for integrity in work. This place speaks to the worst in you.” At first, fame over integrity was the least of Sheen’s worries. He appeared in the success-proof Evelyn Waugh adaptation Bright Young Things, where he spent a lot of screen time traipsing about in heavy eye makeup and mooing lines like “I have a strange longing to play something crimson and obscene by Besson!” Filmgoers had no such longing.

In 2003, Beckinsale and Sheen—who by then had a young daughter, Lily—were cast together in the horror-film franchise Underworld, written and directed by handsome, young Len Wiseman. Sheen should have taken notice when Wiseman asked Beckinsale to shoot Sheen in the head and then hit him with her sports car—all during the film’s first half hour. Soon after, Beckinsale left Sheen for Wiseman, and Sheen found himself without a home. It was either a perch at Izzy’s or one atop the Hollywood sign. Izzy’s won.

Then Sheen, who was splitting his time between Santa Monica and London, lucked into what has become the most important relationship of his career. Until 2003, the writer Peter Morgan had been enjoying about the same good fortune as Sheen. That year, however, Britain’s Granada Television produced a new Morgan script called The Deal, about the relationship between Tony Blair and current prime minister Gordon Brown. Sheen played Blair. “I didn’t even think I looked like him,” says Sheen. “But the film turned out to be a kind of landmark TV in Britain—the first time anyone had ever tried to dramatize contemporary figures without it being a satire.”

When Morgan followed up with The Queen, for which Helen Mirren won an Oscar, he had Sheen in mind to play the frustrated Blair, dragging Elizabeth II by the crown into modernity upon the death of Princess Diana. “For a long time I had been known in the press as Kate Beckinsale’s ex,” says Sheen. “Suddenly I was known as Blair. But the film came out when Blair was at the bottom of his popularity, and it became impossible for people I met to separate how they felt about him with how they felt about me.” Morgan then set about his next project, Frost/Nixon, with the idea that Sheen would play Frost. The play, which retells Frost’s contentious series of TV interviews with Nixon in 1977, opened in London before moving to Broadway and then into film production, with Ron Howard directing. “Four days after we closed on Broadway I was already on the set,” says Sheen. “There is a depth in Frost. He’s both incredibly tenacious and incredibly insecure. Despite that easy charm, he has an overwhelming desire for people to like him.” In 2009 comes The Damned United, which Morgan also wrote for Sheen—a former soccer protégé—casting the actor as aggressive English football coach Brian Clough.

Directors, not writers, keep actors on call. Ford invented John Wayne, and Scorsese made his career with De Niro before he turned to rescuing it with DiCaprio. Morgan/Sheen has raised both writer and actor from relative obscurity, just as the Frost/Nixon encounter retrieved Frost from the outback of Australian television—where he’d landed after early success in London—and Nixon from exile in San Clemente.

“Peter has gained a lot of power in his projects,” says Sheen. “He writes often of two characters up against each other, and there’s something in one side of that relationship he taps into with me.” While Morgan’s queen is as remote as an arctic explorer, and his Nixon is wrapped as tight as a coat hanger, Sheen says that “men like Blair and Frost have these very accessible fronts that Peter relates to in me.” Beneath those public faces, sunny as Santa Monica, lie stretches as murky as the Welsh coastline. Frost is the son of a minister and, like Sheen, an outsider to privilege. Blair failed as a rock promoter before answering to Her Highness. “They’re characters who are very opportunistic,” says Sheen. “But the danger is to take Blair or Frost as lightweights. You do not get into those positions being a lightweight.”

Morgan’s fascination, however, lies in the men and women he pits Sheen against—figures of power expatriated or absent. Morgan wants a reckoning of political abuse, whether by sending Blair to hound the queen out of Balmoral and her chilly indifference to the public or by setting Frost stumbling down to Orange County to confront a cloistered Nixon for a televised admission of guilt. In the wide lame-duck pond we now drift across after eight years of the Bush presidency, Frost/Nixon may resonate with filmgoers more than Oliver Stone’s W.

“That’s why Peter wrote it,” says Sheen. “That’s why we did it, that’s why it’s been popular as a play, that’s why it works. Frost/Nixon is not a museum piece. It is about now.” For Frank Langella, who has spent two years playing Nixon opposite Sheen, his screen performance is a lifetime achievement—more so even than Mirren’s queen. “It’s weird to say this is a breakthrough performance for Frank,” says Sheen, “but for someone who has been around a long time, I hope he gets everything the performance deserves.”

To prepare for his role as Frost, Sheen watched the taped interviews but relied heavily on an earlier acting exercise—watching Snow White and the Seven Dwarfs with his daughter, throwing out impersonations to entertain her. Over the last decade, either on stage or in film, he’s played more historic figures than Disney has dwarfs: Caligula, Nero, two Blairs, Frost, Clough, the British comic Kenneth Williams, H.G. Wells, and Mozart. “Impersonation is working on the outside,” he says. “But the more you do that, the more you alienate an audience. The themes of Frost/Nixon we want audiences to connect with are accountability, the responsibility of the media to go after power, the problems of cozying up for access, and what the press owes the American people. This is the history of our last eight years. It is a conflict we are still living through.”