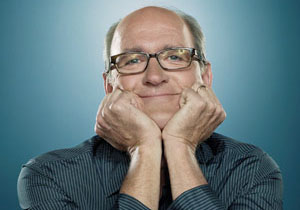 The actor leans back in a beige swivel chair, safe in the womb of his trailer. His tie is askew, his face clouded as he traverses his long career. “It’s taken me a lot of years to get all this—this trailer,” Richard Jenkins confesses.

“I’m a method actor, so I overprepare,” he says, explaining how for his role as a “tough-as-nails lawyer” in the Coen brothers’ Intolerable Cruelty, he enrolled at the University of Phoenix Law School. “It gave my lines a ring of authenticity.” After graduating, Jenkins marched over to costar George Clooney’s trailer to show off his certificate. “I could smell the whiskey even before he opened the door,” Jenkins says slowly. He waved the paper at his fellow actor, and Clooney said, “Why don’t you try acting, asshole.”

Jenkins’s voice barely whispers what he felt at that moment: “Handsomest man I’ve ever seen in my life.”

Everything described above comes from an episode of Hollywood Tales with Richard Jenkins, three video clips you can see on Will Ferrell’s Funny or Die comedy website. The joke is that Jenkins is playing a classic Hollywood type—the gassy cloud of self-regard. The clips are funny because though you can hardly have watched movies for the last 20 years without seeing Jenkins in the role of a dad or a cop—he’s made 50 movies in a 38-year career—you’d be forgiven for not knowing his name. In person, he is nothing like a bloviating celebrity. Jenkins has been married to the same woman for 39 years, and he’s kept his distance from Hollywood, living in Rhode Island even now, with his career taking off after a celebrated performance in the indie film of the season, The Visitor.

“I hope you don’t see that guy too much in my work—the self-important actor,” Jenkins says one evening at the Chateau Marmont restaurant. He’s bald, bumpily complected, wearing jeans and a T-shirt. His eyes look a little tired, and he needs a shave; the actor’s just flown in from Scotland for the opening of The Visitor and is about to fly to Spokane to shoot another indie. “We’ve all met these guys, with all their stories to tell. Somebody with no juice who thinks they have a lot.” Except that now, all of a sudden, Jenkins has pull. When The Visitor screened at the Toronto Film Festival, the first question he was asked at the press conference was “Who are you going to take to the Academy Awards?” After which the room burst into applause.

What’s it feel like to finally be a macher? The pain on Jenkins’s face is palpable. His eyes dart across the patio; his hands stab the air. “No, no, no,” he finally says. Long pause. “That’s a great answer, huh?”

This is a man not used to being interviewed. More than that, this is a man not used to treating himself to life’s finer things. He says he’s been thinking all week about the hamburger he was going to order once he got to town. Now that he’s here, the questions have him nervously poking a knife in a ketchup bottle as his dinner gets cold.

Jenkins better get used to the press. The Visitor probably shouldn’t have even been released in the summer—the time when blockbusters strafe the tarmac and little guys hoping to gather attention are left in the dust. Without a bankable star or a viral marketing strategy, the film improbably found an audience, and four months after its release it had earned more than $10 million. More than that, people aren’t asking Jenkins if he went to high school with them anymore, and his days of jogging through Beverly Hills and dropping in on open houses may be coming to a close.

Eventually Jenkins makes another attempt to talk about his recent success. “I’m 61, so it’s like, the juice is already squeezed. But I have to say it has been great. I’ve been really fortunate I’ve been doing this a long time in movies, since 1985, and I’ve had some great parts. It’s a good way to make a living. You can be unhappy in a lot of professions. This shouldn’t be one of them if you get some work. It’s a nice profession.” It’s getting nicer. Jenkins is set to appear again with Clooney in the next Coen brothers film, Burn After Reading, along with Brad Pitt and John Malkovich, and Will Ferrell requested that he play his stepdad in Adam McKay’s Step Brothers.

Back when he was a struggling actor, Jenkins drove a laundry truck in Chicago for the real father of his Step Brothers costar, John C. Reilly. He remembers meeting his onscreen son when Reilly was four. He was Charlize Theron’s dad in North Country, Scarlett Johansson’s dad in The Man Who Wasn’t There, and the patriarch of the mortuary in HBO’s Six Feet Under. He’s acted with Don Johnson and Telly Savalas, cuddled with Dennis Farina in Stealing Harvard, played a character created by John Updike, and through all of it he’s projected a Bob Newhart-esque deadpan, the sense that just beneath the surface is a smirk or a quirk, a person ready to run through the desert in his underwear—as he did in Flirting with Disaster. His unactorly method is pushed to the front in The Visitor, where he finds the most minimal means to show us what he’s thinking.

Some of the worst advice he ever received, Jenkins says, was that he had to live in Holly-wood if he wanted to act. He gave it a go, for ten months in 1975, living above a garage at Sunset and Crescent Heights. One day while standing in line at the Mark Taper Forum for an open call, he met the actor who played a Clorox bleach bottle in a television commercial. He practically mugged the guy. “I was like, ‘How did you get that part?’ Like he was Olivier!” That’s when he realized he was losing perspective.

“I came out here and was shunned mightily, and so I went back with my tail between my legs and figured there had to be some other way to do this. You try so hard for a while and nothing happens, then when you’ve almost stopped trying…” His hands trail into the air. “I don’t know how it happened.”

He moved to Rhode Island and became an actor and the artistic director at the Trinity Repertory Company in Providence. He says the current attention isn’t likely to make him move, and he isn’t buying a Hummer—not unless they come with only two wheels.

In The Visitor, Jenkins plays Walter Vale, an economics professor and widower whose life is intersected by a young immigrant from Syria. This scholar of globalism gets a life lesson in internationalism, and a lesson in drumming, too: One of the charms of The Visitor is that the middle-aged academic finds himself and lets loose and wails in a New York subway, playing a West African drum called a djembe.

Vale has freezer burns on his soul. He’s been coasting in his career and apart from people for so long that his face barely registers emotion. It’s an amazing performance by Jenkins, and the film’s long quiet moments reveal how much is going on inside the character. It’s also brave. In one scene Vale gets out of the shower with a towel around his waist; his chest is sagging and bulging, an image of naturalism few actors would permit anyone to see. “When my son saw that, he said to me, sort of blurted out, ‘Wait a minute, these people—the ones in the theater—shouldn’t be having this. That’s something I have. That’s my dad.’ ” He shrugs. “Hey, you buy the premise, you buy the joke. You can’t not do that because of vanity. I could have sucked it in, but I thought, I don’t do that at home.”

In The Visitor Vale is a symbol of America waking up to global realities. The script was written (by Tom McCarthy, who also directs) with Jenkins in mind and began as a character study. “That’s what I always thought we can do as actors—make a human connection like that little movie does. That’s what I thought it was—and for the most part it is, or can be. Even if you’re spooning with Dennis Farina.”

He smiles. “I guess that is a human connection, huh?”