Downtown Los Angeles has its share of ghost stories. The backdrop of noir novels and real life crimes, the city’s Beaux Arts buildings have seen their share of chilling events. This Halloween, we encourage you to see for yourself, by taking an immersive, self-guided walking or driving tour of Haunted Los Angeles.

We’ve created an audio experience which you can find here. This page offers a text-only version. 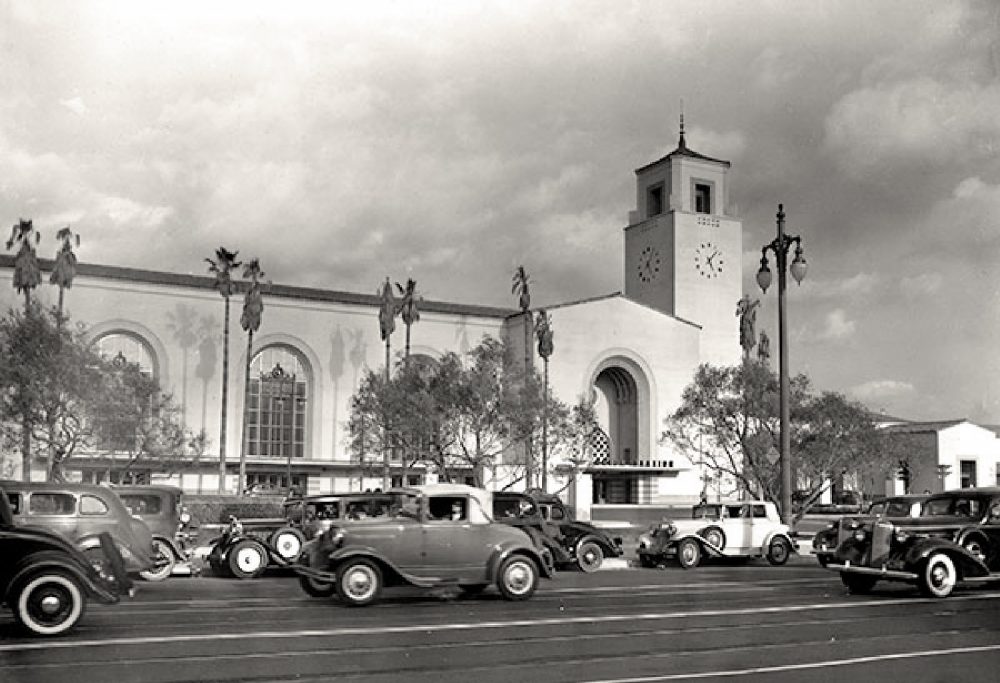 Built on the ashes of Old Chinatown, the site of one of the bloodiest race massacres in the city’s history, Union Station has seen countless passengers arrive at its terminals with a suitcase and dream—but the station has also been the end of the line for some.

1n 1944, a suspicious antique black trunk sent from Chicago was forced open – and the bound, dead body of “Jane Doe 13” tumbled out. Using fingerprints, the woman was identified as 24-year-old Louise Villegas and her killer was her husband Soylo. As the story goes, Soylo murdered his young wife when—during their own honeymoon—Louise found out he was already married.

Across Father Serra Park from Union Station stands another building of interest. Pico House, the hotel erected by Pio Pico, the last Mexican Governor of California. According to the Los Angeles Paranormal Association, security staffers have in the past reported hearing mysterious footsteps resounding on upper levels and seeing shadowy figures leaning over balconies.

Angelenos owe thanks to the spirit world for this unique piece of architecture.

Rookie craftsman George Wyman was unsure about this, his first assignment, so he contacted his dead brother Mark through a device similar to a Ouija board. Spiritualism was popular at the time, and when he supposedly received the message “take the / Bradbury building / and you will be / successful,” he went ahead with the $500,000 project.

In 1908 the Bradbury’s head janitor was also searching for divine inspiration when he was unable to locate his assistant, Carl King. Last seen on the third floor, King seemed to have disappeared into thin air, and on payday, no less. Tragically, he was many found many hours later at the bottom of the freight elevator shaft, “his skull crushed and many bones broken,” the victim of a tragic accident.

Once a bank and now home to the Last Bookstore, Spring Arts Tower was largely abandoned before downtown’s renaissance, but reports of a ghostly night watchman—his keys jingling as he did his rounds opening and closing doors on the third floor—continue to this day.

Creepily, the Los Angeles Times archives reveal that night watchman Al Breitenbecker fell down the cargo elevator shaft from the third floor in July 1927. As he bled to death in the dark, his groans were heard by Citizens National Bank employees—but they didn’t find him until it was too late.

Also, a small girl carrying a ball and wearing a white dress has been seen on the stairs at the side entrance. Selling your used books has never been so spooky.

Opened in 1906 as the most luxurious hotel in town, “the Alex” was home to Fred Astaire, Sarah Bernhardt, Humphrey Bogart, Charlie Chaplin, Joan Crawford, Clark Gable, Greta Garbo, Vivien Leigh, Mae West, and many others. It has some supernatural residents too, including a woman dressed in black who glides along the corridors and a mysterious young female who dances in the Palm Court ballroom.

It’s also a place where some unfortunate souls checked out for good. In 1922, the Los Angeles Examiner declared “Ghost Woman Sought” when Oregon man Vaden Boge drank cyanide in his coffee and gasped that his wife was the one who’d poised him. Police combed the city, but it emerged that there was no Mrs. Boge. The unhappy fake husband had created an elaborate hoax suicide, and, as the next day’s headline read, “Had Feasted To Death Alone.”

Outside, check out the fierce dragon statues and the gray, dusty windows of the “Ghost Wing,” an annex of the hotel that was sealed off until 2012 and has been unoccupied for over 80 years. 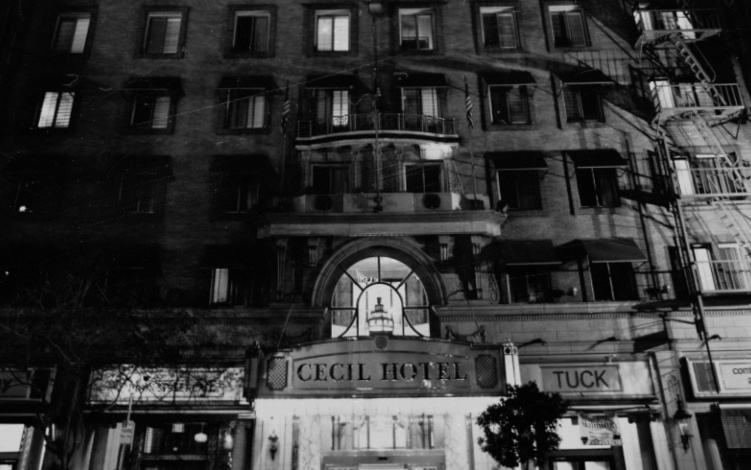 The building at 640 South Main Street has been known as Stay on Main for several years, but the building’s landmark status means that the striking, blood-red “Hotel Cecil” signs that flank the edifice will remain for good. In fact, they’ve become a sort of beacon for fans of the macabre.

Back in 1924, the Cecil was the largest hotel in West, with 700 rooms ready to cater to the many business travelers that were flowing into the fast-growing Los Angeles. The first death, which was of natural causes, took place just 18 months after the hotel opened. A few years later, in 1931, 46-year-old WK Norton took his own life at the hotel by drinking poison.

That was long before it was made world famous the bizarre death of Canadian student Elisa Lam, whose body was found in the rooftop water tank in 2013.

Over the years, the hotel developed a reputation among urban explorers for being a locus of death and murder. In fact, two prolific serial killers are said to have lived at the hotel: “Night Stalker” Richard Ramirez and Jack Unterweger, who was convicted of murdering a woman in his native Austria before moving to Los Angeles. Unterweger was later implicated in the deaths of three prostitutes in Los Angeles, and committed suicide in prison.

The 235-room Stillwell, which opened for business in 1913, has suffered suicides and even the occasional murder in its long history.

In 1936, “Los Angeles Dancer Slain” was the headline above a picture of a tutu-wearing, curly-haired blonde named Donna Park. The exotic dancer had been killed by her lover, acrobatic dancer Irving La Zarr, who planned the murder-suicide during his stay at the Stillwell, and carried it out a few weeks later in Arizona. Their bodies were found with their “hands clasped in death.”

Though it’s temporarily closed, Hank’s dive bar is here, and staff say the ghost of the late owner Hank Holzer, a former boxer, still makes appearances. He opened the place in 1959, and one of the bartenders says that when she closes up at night, it always feels like there’s someone there with her. 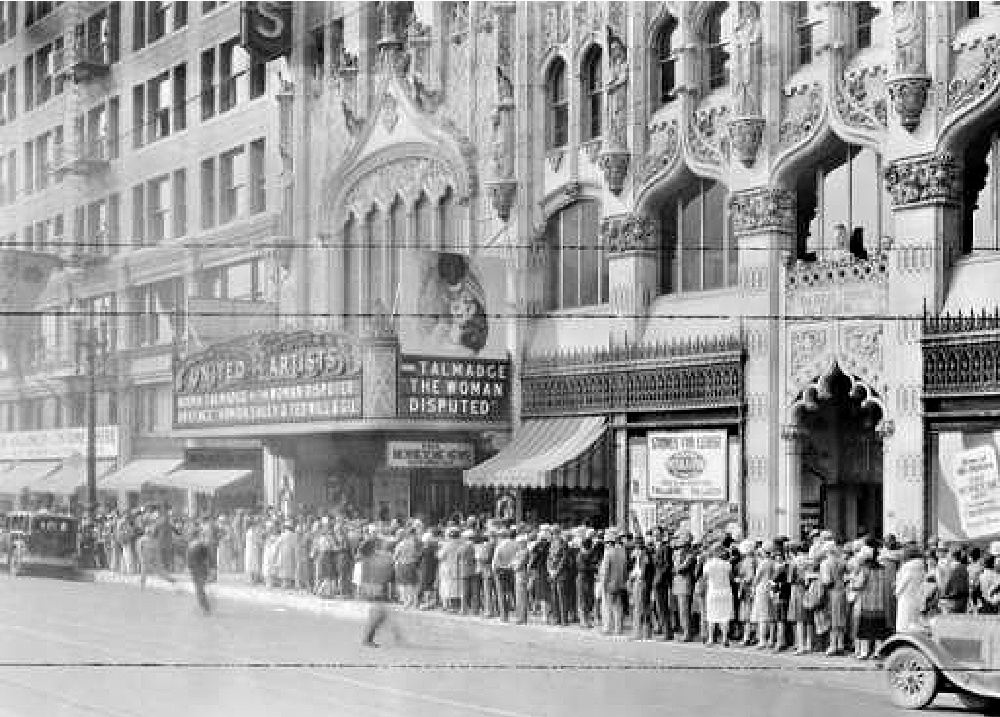 Known for its rooftop party scene—at least before COVID-19 came to haunt L.A.—the hotel and theater is an ornate, Spanish Gothic building created in 1927 for the movie mavericks who set up United Artists.

Years earlier in 1895, when a house stood on this site, a female leg wrapped in newspaper was found here, and newspaper reports revealed that a foot had turned up some years earlier. Oddly, the foot didn’t belong to the leg, and police never figured out where they came from—or who they’d belonged to.

In 1942, when this was the Texaco Building, an accountant opened fire on his boss after fearing that he was going to be dismissed. His boss survived, but the shooter died of a self-inflicted gunshot wound.

More recently, hotel guests have reported hearing the sounds of children both laughing and crying, and there have been sightings of a ghostly woman in white.

You’ll spot spooky gargoyles and griffins on the outside of this Romanesque Revival building, which opened in 1926. Inside is a bronze fountain sculpted by Burt William Johnson, who used his three-year-old daughter Cynthia Mae and his five-year-old son Harvey as models. Sadly, Johnson, who suffered from heart troubles throughout his life, died before the building was finished.

The ghost of an older man has been seen in the building, and a contractor reportedly once felt a tap on his shoulder and heard the giggle of a little girl. Staff and tenants have said they it’s Johnson and daughter Cynthia, trying to reunite in the building he created. Perhaps Harvey is around too?

Later, in 1967, two secretaries who worked at a brokerage officer here were found dead in Florida. After stealing a fortune in securities, they both left L.A. – and then unwisely got involved with infamous jewel thief Jack “Murph the Surf” Murphy. Did he kill them? He was sentenced to life in prison in 1969; an accomplice was convicted of second-degree murder.

The Biltmore hosted the first few Oscar ceremonies and is decorated with angels, but the swirl of glittering chandeliers and afternoon tea can be misleading. In early 1947 this was the last place – more or less – Elizabeth Short was seen before she became forever known as the Black Dahlia. The Gallery Bar’s cocktail of vodka, Chambord black raspberry liqueur, and Kahlúa, was created in her honor.

In the 1980s the Biltmore did duty as “The Sedgwick Hotel” when the original Ghostbusters first captured “Slimer” here—though they seem to have left quite a few spirits behind.

Guests have pointed out the ghosts of two kids, a boy and a girl, running across the usually closed balcony in the Crystal Ballroom, and a man in an Abraham Lincoln-style stove pipe hat has been seen in the corners of the Tiffany Room. Perhaps he knows the ghostly figure of a man that three female guests reported seeing in their room a dozen or so years ago.

Angels Flight, the pumpkin orange funicular that’s said to be the shortest railway in the world, is a favorite film noir backdrop, and has also appeared in two stories by author Raymond Chandler.

In 1943 a sailor – probably having over-celebrated on shore leave – foolishly decided to walk up the tracks, and was crushed by one of the counterweighted trolleys when they passed each other. It took fire crews 20 minutes to extricate his body.

There have also been stories of a ghostly figure going up to Bunker Hill in the foggy early morning, though it’s probably no coincidence that the sightings began soon after Michael Connelly’s book Angels Flight was released. That book saw detective Harry Bosch investigating a double murder that happened on board.