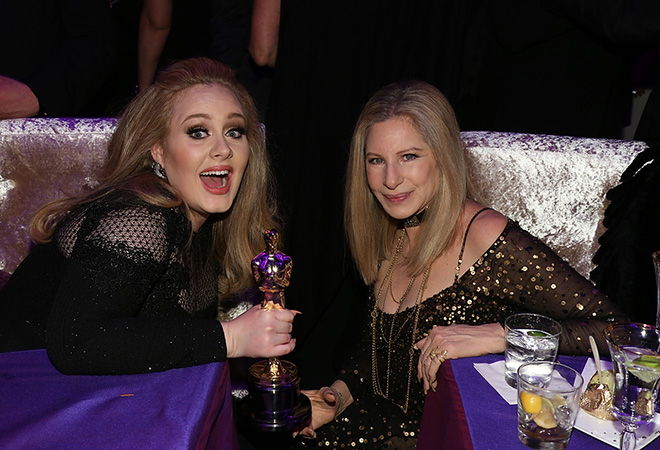 What Do You See? Plenty of celebs and trophies: Adele and Barbra Streisand at The Governors Ball in 2013

On Sunday, the Academy Awards will be broadcast to millions of people. The fashion! The glamour!! The speeches!!! For the rest of the winners’ lives, they will be known as “an Academy Award winning” actor/actress. There are a handful of things, however, at the glam-fest that you won’t see watching on your couch…

Metal Detectors: Everybody (Meryl Streep included) passes through elaborate metal detectors housed under a tent on the red carpet. They are a bit like the starting gates at a racetrack. They spit you out onto the massive red carpet and the awaiting press. Security is no joke with streets blocked off, barricades, SWAT and police everywhere.

Red Carpet Traffic Lanes: There are three lanes on the carpet: Non-Famous, Famous and Press. Non-famous people are hurried along by well-dressed security guards who keep telling them to keep it moving. They also tell people not to take pictures, but most people just keep snapping. Take a snap backstage, however, and you get 86’d.

Going Up: Something that always makes me laugh happens after the show. Everyone in their gowns and tuxes hop on the Hollywood and Highland mall escalators and go up, up, up (usually three or four escalators) to the top level where the Governors Ball is held. It is just funny to see everyone in fancy dress hanging on to the handrails and slowly moving up diagonally in the shopping center.

Because The Bible Tells Us So? Each year a group of people gather on each side of corners of Sunset and Highland with placards spouting Bible verses. I pass by them each year as they scream into loudspeakers. Everyone is hollering at the same time so I never quite know what they are trying to convey. They also must go to bed early because they are usually gone after the show.

Partin’ Shot (of caffeine): When all the awards are handed out and the winners have gotten their trophies engraved at the Governor’s Ball the evening (at the Dolby Theatre anyway) draws to a close. The last people you see are the baristas on the red carpet serving coffee drinks while you wait for your limo. Classy touch.