Home Arts & Events ‘FDT’ By YG and Nipsey Hussle Was Streamed Over a Million Times... 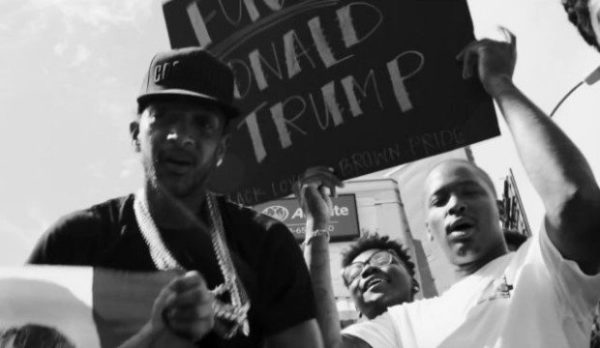 UPDATE: 11/8/20 – On Saturday, as it became the soundtrack YG and Nipsey Hussle’s “FDT” hit the top spot on the iTunes. The 2016 song went from a galvanizing anthem in the days leading up to the election to the soundtrack of jubilant, spontaneous celebrations that broke out across the county.

CNN exiting to commercial while FDT plays in the background 💀 pic.twitter.com/6qemjKgiFa

FDT was not the only older song to see a chart surge linked to celebrations of the defeat of Donald Trump. “Party in the USA,” by Miley Cyrus also re-entered the iTunes top 40 since media called the race for Joe Biden.

11/6/20 – In 2016, L.A. rappers YG and Nipsey Hussle released “FDT,” an anti-Trump anthem that fit the moment then–and, based on how often Americans have listened to the song this week, feels equally timely for many now.

The song has been a staple of YG’s concerts for the last four years, sometimes involving on-stage Trump impersonators for comic relief. At Coachella in 2019, just days after the death of his dear friend and duet partner Nipsey Hussle, he performed the piece, with tens of thousands of fans ecstatically shouting the refrain along with him.

A dedicated activist for social justice, YG was instrumental in the organizing of some of the largest demonstrations for Black Lives Matter that marched through Los Angeles earlier this year. In connection with that movement, the musician released a follow-up to his 2016 anthem, “FTP.”

RELATED: A Year After Nipsey Hussle’s Murder, the Crowds Have Faded but the Grief Hasn’t