Home Dining Chefs and Restaurateurs In the Waning Days of the Shutdown, L.A. Takeout Has Gotten Elaborate 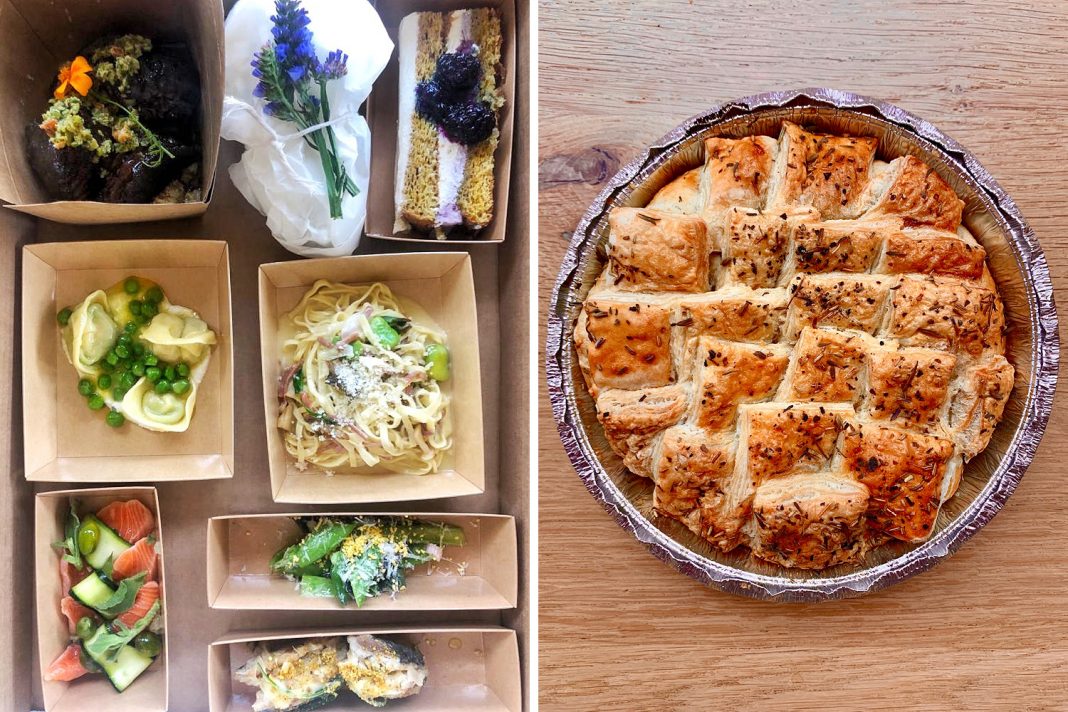 With the lockdown dragging on and on, fine-dining chefs are taking takeout to new levels—and there’s a hunger for it.

“Initially we just wanted to give people comforting things to feel safe and homey, but now that experience has to evolve,” says Dave Beran, the chef at Santa Monica’s Dialogue and Pasjoli. In May he offered an at-home take on Pasjoli’s famed pressed duck, an elaborate affair that, at the restaurant, involves a fowl carcass being crushed tableside in a turn-of-the century gadget to yield a juice that’s made into a savory sauce. The $155 take-home version for two includes seared duck breast, salad with crispy duck skin bits, duck leg confit bread pudding, rice pudding for dessert, and an instructional video and ingredients for making the sauce at home. The first time the meals were offered, they sold out within 20 minutes. Meanwhile, Dialogue, known for its lengthy tasting menus, has been making elevated chicken pot pies with black truffles. When Beran took them off the menu to try other fare, there was an outcry, and he had to add them back.

“We got so many requests,” he says.

“I’m super itching to eat a tasting menu,” he says. “Everyone is so bored at home, food just shot higher on the list of entertainment options.”

Some are taking packaging to beautiful extremes. In May, Rossoblu, the beloved downtown Italian joint, started offering boxed, flower-garnished $49 seven-course dinners. “We wanted it to feel very much like it was curated and there was thought put into it. And it wasn’t just like some pieces of chicken thrown into a box,” chef-owner Steven Samson says of the packaging, which costs the restaurant about $6 per dinner. “It’s not really about making money for us,” he adds. As of June 18, Rossoblu reopened for in-restaurant dining with distancing guidelines in place.

At n/naka, takeout comes in gorgeous bento boxes sourced from Japan. The roughly 150 takeout meals available each night, priced at $38 or $85 a person, sell out in minutes. Chef Niki Nakayama thinks she will likely continue offering them for some time to come. “We will actually stick to the takeout model until it is safe and comfortable for guests to dine in without extreme safety measures,” she says. According to their website, the plan is to reopen to in-restaurant diners on June 30.

RELATED: Where to Get Margaritas to Go in L.A.

After Narrowly Surviving the Pandemic, This Persian Restaurant Is Trying to Recapture Its ‘Before Times’ Success