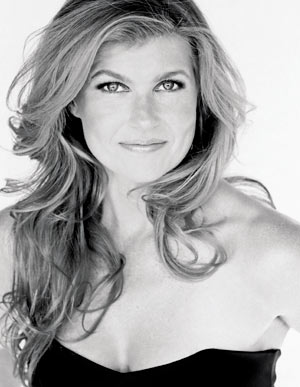 Connie Britton, the star of Friday Night Lights, invites us over to her Hollywood Hills home for some very un-Texan vegan tacos.

While some actresses are un-recognizable outside their hair-makeup-wardrobe bubble, Connie Britton looks exactly as she does as Tami Taylor, the high school counselor on NBC’s acclaimed Friday Night Lights. You’ve got the cascade of red hair, the freckles, the wide-open gray-blue eyes that meet yours straight on. Britton is gorgeous but not a glamour-puss, so when she mentions driving from L.A.

Britton is on a weekend break from shooting the third season of FNL, the hour-long drama about a small town in Texas and its high school football team, the Dillon Panthers. She plays the wife of the football coach, in a much-amplified reprise of the role she played opposite Billy Bob Thornton in the 2004 movie—adapted, in turn, from the book by Pulitzer Prize-winning journalist Buzz Bissinger. Since its debut two years ago critics have been kvelling about the show, and about Britton and costar Kyle Chandler, who plays her husband, in particular. As a couple beset by the demands of a marriage, challenging careers, a teenage daughter, and a newborn, they portray a relationship ideal through its flaws: He gets jealous of a goofy coworker she spends time with, but when he explains why, he comes off as adorable rather than controlling. She goes through a morning at work with baby vomit on her shirt and locks horns with her testy 15-year-old but rarely loses her undercurrent of dignity. Beneath all of life’s distractions, their love for each other is unquestioned. The Taylors are the unassuming power couple of the heartland.

FNL’s viewers have been devoted, but 6 million per episode wasn’t enough to guarantee renewal. When production was halted by the writers’ strike last December, it was anyone’s guess whether the cast and crew were breaking temporarily or for good. Thanks to an innovative collaboration, the next season will begin airing October 1 at 9 p.m. on DirecTV’s original programming channel, the 101 Network. NBC will pick up the new episodes early next year.

“I love that I live right beneath the Hollywood sign,” says Britton, who grew up in Lynchburg, Virginia. “If you stand where I am, you can see the D.” Well, part of it. Just below the French window, where the land falls away into a deep canyon, workers are adding a deck, and a trellised garden is in progress in the front. But there’s no evidence of updating in the Spanish-style home’s grand and quirky interior. Hand-painted designs twirl around the ceiling beams, and California tiles line the rise of steps leading to a spacious pale yellow kitchen that’s vintage ’50s.

Earlier this year Britton, who is 41, went on a raw food cleansing diet, and this afternoon she’s invited the vegan chef who designed the menu to come by. Kristan Andrews is chopping organic tomatoes for her raw no-meat, no-cheese tacos. She made them, along with spelt spaghetti, for the going-away party Britton threw before heading to Austin this past summer. “I love to have people over, and this is a great party house,” Britton says. “But I can’t cook. So it’s always ‘Come for dinner! It’s potluck!’ Or ‘Hey! We got pizza!’ This time it was the oddest thing. People came to the door saying, ‘I hear you’ve got vegan tacos! Where are they?’?” She was so pumped by her cleanse that in Austin she planted herself at the raw bar in Whole Foods. “I sat down with the person there and said, ‘OK, we’re going to get to know each other.’?”

That’s the sort of thing Tami would do. So would a lot of Britton’s characters: They tend to be direct, with an emotional bravery that underscores a nascent vulnerability. FNL’s freestyle shooting method requires some risk taking on the part of the actress as well. Three cameras roll simultaneously, and the script is just a jumping-off point. “Kyle and I will talk about a scene and decide where our characters would want to go with it,” she says, “and then we shoot.” No rehearsals, no marks to hit. “The cameras are the ones telling the story,” she says. “They get in there and find these little moments happening spontaneously.”

Britton has made a career of little moments, conveying powerful emotions with infinitesimal shifts in expression. Early on there was Molly, the wife of the cheating oldest brother in the Edward Burns indie favorite The Brothers McMullen. “That was my movie break,” she says. A long time coming if you consider that she started acting at age seven, when she, her twin sister, and their cousin put on plays with names like Murder on the Sunshine. A theater star in high school, Britton majored in Chinese at Dartmouth because she never saw acting as a profession. After graduation, though, she moved to New York and studied with Sanford Meisner, then bounced around off-off-Broadway. “There’s something pretty inspiring about those days,” she says. “You’re driven by sheer idealism and passion, living on Rice Krispies treats and water.” Particularly inspiring when there’s a payoff. “We all went up to Sundance for Brothers McMullen and stayed in one condo, in bunk beds,” she says. “When we heard that it won the Grand Jury Prize, we didn’t even know there was a Grand Jury Prize.”

While Britton brews mint tea for her guests, Andrews blends soaked cashews and yellow miso to make “cheese,” produces “meat” from pecans and dates, and shares some raw food tips: Ready-made pico de gallo is a respectable substitute for one that’s homemade. (“You can actually get it in the store?” says Britton. “That’s good to know because I’m not going to be chopping all that stuff up.”) The price code for all organic produce begins with nine. (“Who made that up?” asks Britton.) Sea salt is infinitely more nutritious than refined salt. (Britton takes her canister of Morton and throws it in the trash.)

After steady work in indie movies and sitcoms—Spin City, with Michael J. Fox; The Fighting Fitzgeralds, with Brian Dennehy—the Friday Night Lights role opposite Thornton seemed poised to nudge Britton into a hotter spotlight. But as filming went on, her part dwindled before her eyes. “During the premiere,” she says, “I leaned over to my friend and said, ‘I think they’ve made my character mute.’?” Peter Berg, who codirected, promised to make it up to her.

She was playing a single mom having a dalliance with Kiefer Sutherland’s Jack Bauer on 24 when Berg asked her to reprise Tami for TV. “I figured it would be the same deal—a show about football where I play the coach’s wife,” she says. “The only thing less gratifying than doing it in a movie would be playing it on television. No thanks.” But Berg promised to expand her story lines, and Britton had a soft spot for the material. “I’m from the South,” she says, “and I’ve always been fascinated by the complexity and vibrance of Southern women. They live in a very conventional world, but they’re some of the most ballsy women I’ve ever known.”

In the morning Britton will head back to the Taylor family to infuse Tami—who becomes the high school principal this season—with some of that chutzpah. She’ll also likely succumb to the set staples: Tex-Mex and margaritas. Today, though, she is dietarily virtuous. Andrews has arranged her tacos on cabbage leaves and set them on a bamboo tray in the living room. We troop in with glasses of virgin mojitos—lime, mint, and agave nectar—to chow down. The tacos are damn good. Britton has two