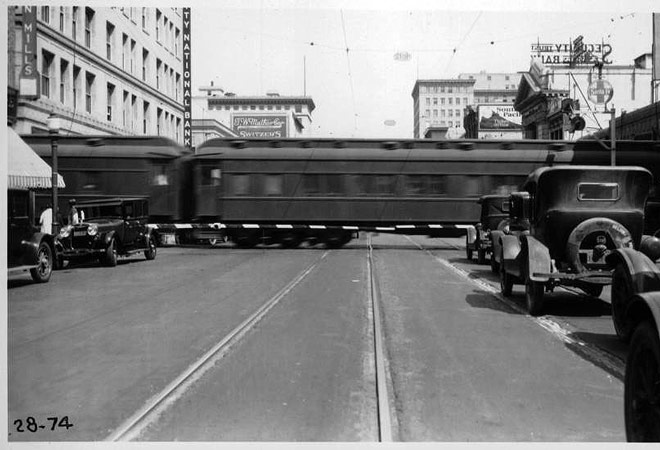 For more than a century, this was a regular sight in Pasadena: a passenger train rumbling through the city’s commercial district, crossing busy Colorado Boulevard and bringing traffic to a halt. Pasadena became a stop of the Atchison, Topeka, and Santa Fe Railroad’s transcontinental line in 1887, when the railroad bought a local line to downtown Los Angeles and extended its tracks from Pasadena to San Bernardino.

Passenger trains continued to roll through the city until 1994, when Metro bought the old right-of-way for a new light rail corridor we know today as the Gold Line. On January 14, 1994, Amtrak’s Southwest Chief made its final stop at the old Santa Fe depot on Raymond Avenue, which today houses La Grande Orange Café and anchors the Del Mar Gold Line station. And the old rail crossing on Colorado? Metro had little choice but to dig a 2,400-foot-long trench along the right-of-way and build the Gold Line beneath the streets of Old Town Pasadena. How else could a light rail line, which draws its power from high-voltage overhead wires, coexist with the tall and flower-encrusted floats of the city’s signature parade?

Above: A passenger train crosses Pasadena’s Colorado Street in 1928. Courtesy of the Automobile Club of Southern California Archives and the USC Digital Library.