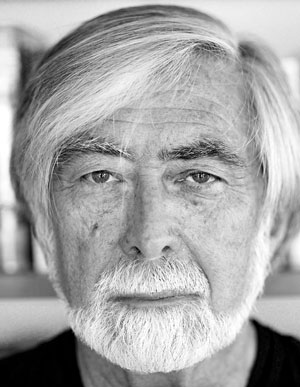 You can’t call Robert Scheer shy about announcing which side his guns are buttered on. His latest book, The Pornography of Power: How Defense Hawks Hijacked 9/11 and Weakened America (Twelve, 241 pages, $24.99), surveys the Bush era’s sins in the name of national security from a pinnacle of disdain that could make Simon of the Desert feel like a flagpole-scaling frat boy. OK, so his point of view isn’t exactly underrepresented on Amazon.com; haven’t our forests suffered enough at W.’s hands? But Scheer is hardly a new kid on the block when it comes to exposing the workings of ye olde military-industrial complex, his bête noire since Vietnam and a facet of American life that’s unlikely to up and vanish at the next inaugural.

Then again, neither is Hollywood, where gurus have always been popular and Scheer has long been to the Industry’s would-be wonks what the Maharishi once was to its would-be transcendentalists. That’s why a reader as appalled as he is by our Iraq misadventure could wish he’d thought twice before clinching his case against one of its lesser talking-head enablers, former U.N. ambassador Richard Holbrooke, by describing an “unpleasant” 1979 encounter with the man at “a small dinner party of about eight people at the Los Angeles home of television producer Norman Lear, at which Holbrooke and sixties folksinger Joan Baez were the guests of honor.” The faint rasp you just heard was Rush Limbaugh delightedly firing up a cigar.

Besides speaking volumes about Scheer’s special place in L.A.’s liberal cosmos, this glimpse of the folks he breaks bread with also reminds us of his Ancient Mariner status in the job. In this millennium Lear and Baez, not to mention Warren Beatty, would be ideally cast as the bridge-game phantoms in a Barbra Streisand version of Sunset Boulevard, and Streisand herself, whose flair for slapstick used to be intentional, was the most prominent of the luminaries who publicly canceled their Los Angeles Times subscriptions after Scheer’s 2005 ouster from its op-ed pages. As his former paper goes to Zell in a handbasket, he now does most of his scourging via Truthdig.com, his Webby Award-winning online Brillo pad, while also writing a syndicated column for the San Francisco Chronicle and filling the left chair on KCRW’s Left, Right & Center. But Scheer’s most significant role in recent decades has been metaphorical—that of a monk at court, providing integrity’s equivalent of a contact high to the Westside’s unique cluster of showbiz affluence and hoped-for political influence.

Not that the relationship has been all sackcloth and ashes on his end. Over the years he’s dabbled in Industry chic in ways that might make a less obviously upright journalist worry about compromised independence. Besides his credit as “script consultant” on Oliver Stone’s Nixon (that went well), he’s turned up onscreen as a sort of rabbit’s foot in human form in both Beatty’s Bulworth—you remember Bulworth, don’t you?—and Edward Zwick’s The Siege. More recently he also coproduced and appeared in a documentary starring venerable Westside do-gooder Stanley Scheinbaum. While I haven’t seen it, the excruciating title—Citizen Stan—tempts me to go out on a limb with a wild guess the portrait isn’t critical.

It’s not so much that Scheer is starstruck as that his admirers are gravitas-struck and he’s willing to feed their jones. His track rec­ord as a critic of American power brings the ballast of history to Streisand Boulevard; he’s a one-man hedge against superficiality. Even though he can be nearly as screechy as the left’s most excitable flibbertigibbets, the difference is that he isn’t glib. He screeches in a weathered baritone.

A title like The Pornography of Power doesn’t leave much room for doubt that Scheer is playing to the gallery, but what is it supposed to mean? He’s sufficiently smitten with the phrase to be reviving it from an earlier collection of essays, yet it’s only supported by outbreaks of rhetorical window dressing: the intro’s invitation to see “the gyrations of lobbyists and politicians” as a lap dance, a later equation of Bush’s Global War on Terror with “the drug of choice at some wild orgy” (how many tame ones has he been to?). Helped out by sophomoric cover art that features a fist gripping a missile-shaped dollar bill, all he’s offering is the old Dr. Strangelove view of jingoes and militarists as maladjusted sex obsessives. It may not say beans about them, but it sure strokes our liberal smugness.

Scheer does better once he buckles down and explains how the armaments industry and its congressional enablers treated the collapse of the Twin Towers as an opportunity to get back into business after a few lean post-cold war years. Between them, they’ve stuffed our defense budget with costly weapons systems that have little or no applicability to fighting terrorists and often aren’t on the services’ own wish lists; at $237 million per aircraft, Boeing’s plum contract for 120 C-17 cargo planes the Pentagon didn’t want is an egregious example. Yet at the level Scheer tackles the subject, this is the stuff of a muckraking magazine article, not a book. That’s one reason why, as skimpy as The Pornography of Power is—just 241 pages of large type—he keeps repeating the same points in the same tendentious language.

Just like the contractors he excoriates, he’s also taking advantage of 9/11 to refight the last war. Or revisit perennial targets, from Star Wars to the nuclear bugaboo, meantime giving short shrift to new ones that might usefully engage him. While war profiteering has been with us since the first battle of Bull Run, if not Valley Forge—more than wooden teeth are to blame for George Washington’s sourpuss look in Revolutionary portraits—the Bush era’s most reckless innovation has been to privatize the military’s own functions, not only outsourcing its support services to Halliburton but giving Blackwater’s unpoliced freebooters a hefty security role. These days we even subcontract torture, yet Scheer shows no interest in the subject. Is that because he knows his target audience isn’t likely to get worked up about distinctions between soldiers and armed private-sector thugs in the first place?

He’s not above catering to his readers’ prejudices in other ways. Legislators of both parties are rightly faulted for treating defense contracts in their districts as “local jobs-and-profit programs” instead of questioning their usefulness to the nation at large. But the raps on the knuckles Barbara Boxer and Dianne Feinstein get on that score are trivial next to his scorn for—c’mon, one guess—Joe Lieberman, who’s raked over the coals for keeping Connecticut in the submarine-building business even though the sub fleets of every actual or conceivable enemy in sight are “decrepit” (the Russians), “junk” (the Chinese), or in Al-Qaeda’s case, nonexistent. Of course, that’s only the right measure of the program’s worth if the subs’ primary mission is to duel other submarines, but is it? More to the point, Lieberman’s name is sure to trigger Pavlovian froth on the left in a way Boxer’s or Feinstein’s isn’t, making the choice of him as the poster boy for boondoggling look more than a mite calculated—even if you agree, as I do, that it couldn’t happen to a nicer guy.

Any high school debater looking for inconvenient truths to lob at the waning Bush administration will find some helpful nuggets in these pages. As far as I can tell, though, there isn’t one that Scheer has dug up on his own. You’d never guess he first won renown as a dogged reporter and interviewer; The Pornography of Power is the kind of indictment that seems Googled as much as written. While it’s true the great muckraker I.F. Stone didn’t wear out a lot of shoe leather either, he was poring over committee hearings and obscure government reports for his finds. Scheer’s favorite sources are The New York Times or—when he needs heavier ammunition—Seymour Hersh’s expert reports in The New Yorker, rather undermining his projection of himself as a lonely truth teller. All in all, what he’s produced isn’t much more than the high-minded version of ad hominem polemics like Michael Moore’s Dude, Where’s My Country? or Al Franken’s Lies and the Lying Liars Who Tell Them. At least Moore and Franken knew ebullient low-mindedness was the right way to go.

Bringing historical perspective to bear on the subject ought to be Scheer’s strength, but the little he provides is shoddy. While his belated appreciation of Dwight D. Eisenhower’s sagacity is more than reasonable, it’s dizzying to be told that Ike’s 1959 invitation of Nikita Khrushchev to the United States caused “the unraveling of the Cold War.” However entertaining and humanizing Khrushchev’s tour of Midwestern granaries and Hollywood soundstages was, it was followed by the U-2 incident, the collapse of the Paris summit, the Berlin Wall’s construction, and the Cuban missile crisis—not exactly a litany of Great Moments in Superpower Friendship. Funnier still is Richard Nixon’s considerably more gingerly rehabilitation: “after all,” the author reminds us, “I did witness the murderous consequences of his Indochinese bombing campaign up close.” Nonetheless, we learn, “it was his diplomacy that began the unraveling of the Cold War.” At least this time the claim has justice, but the repetition won’t do much to enhance anyone’s esteem for Scheer’s gifts as an analyst or a wordsmith.

What may go without saying is that he never gets around to articulating what his idea of a reasonable post-9/11 defense posture might be. Scheer also doesn’t come out and admit that, for his purposes, there ain’t no such animal. In a roundabout way, The Pornography of Power is peddling complacency, not outrage; it’s designed to encourage the kind of arid sanctimony that delights in viewing Pentagon brass hats, right-wing ideologues, Washington pols, and evil corporations simply as interchangeable tentacles of a beast named “they.” Revealingly, when the pronoun first appears in Scheer’s opening chapter, it has no antecedent: “The only thing they know how to do is spend money.” Don’t you think Warren could have told him the same could be said of Hollywood?