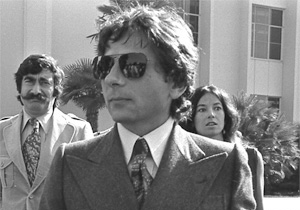 The last time Roman Polanski saw her alive, his beautiful and pregnant young wife, Sharon Tate, gave him a copy of Thomas Hardy’s 19th-century novel Tess of the d’Urbervilles, about a young country girl seduced and ruined by the men around her. A decade later Tess was the first movie Polanski made after his conviction for seducing a 13-year-old in Jack Nicholson’s house and then fleeing the country. Tess was filmed in France rather than England, which would have extradited Polanski back to the States, and starred Nastassja Kinski, with whom Polanski had an affair that began when she was 15; their film bore the dedication “To Sharon.” This contradictory, sordid, and burlesque tangle sums up better than anything the Polish-raised director as either a hypocrite for the ages or just a plain piece of work. Of course it would let Polanski off rather easily to claim his lust for underage girls, which he admits to with a shrug in Marina Zenovich’s new documentary Roman Polanski: Wanted and Desired, was some expression of unbearable grief—but that doesn’t mean the unbearable grief wasn’t real or that someone with depraved impulses is beyond such emotional devastation. The shots in the documentary of a stricken Polanski, following the brutal murder of Tate and their baby by the Manson family in Benedict Canyon in 1969, are in some ways the most revelatory of the movie, even if they’re not what the movie’s about.

You don’t need to see Wanted and Desired to know that every film Polanski has made serves as a Rorschach—the celluloid inkblots of an autobiography. Beginning with his escape from the Kraków ghetto in Nazi-occupied Poland as a boy who was orphaned by the war and continuing through his down-and-out days in Paris, his hedonist sojourn to Swinging London, and his late-’60s and mid-’70s peak as an enormously successful director in America, Polanski’s history precedes his films, or at least most people’s experience of watching them. Polanski’s career was barely a decade old when it already had become a psychological cliché: Following the Manson family’s ritualistic slaughter of Tate, Polanski filmed a startlingly bloody Macbeth, including a scene that so paralleled the Manson murders that movie audiences of the day couldn’t be blamed for concluding he somehow got off on the carnage, in the same way the audience concluded Polanski’s fascination with such violence somehow brought it on in the first place. As Zenovich’s doc makes clear, Polanski—8,000 miles away in Europe—was actually an unofficial suspect in the ’69 crime that marked like a blade’s swath the end of both L.A.’s innocence and the decade’s. As the film also makes clear, something in Polanski was broken irrevocably; some part of his spirit, whatever bright hope that flickered in opposition to the nihilism of his youth, was snuffed forever. We shouldn’t be too glib about this: He might have been inclined to seduce 13-year-olds anyway. As much in love as he was with Tate—and there doesn’t seem any doubt he was madly in love with her—in the brief two years of their relationship he found it impossible to be faithful to her. But after his wife’s death, whatever part of his conscience that once might have taken rape seriously wasn’t likely to see the point.

Very narrowly Wanted and Desired is the story of Polanski’s arrest in 1977 for “unlawful sexual intercourse with a minor,” whom he was photographing, and the conviction that prompted his flight from the United States. But there exists around the documentary a ghost movie, like a ghost limb, an amputation of the story that doesn’t know it’s missing. As is often the case in such matters, the rape had about it a certain degree of he said, she said, but no one disputes the girl’s age or that Polanski had sex with her. The prospective trial was the stuff of tabloid dreams, before the  D.A. prosecuting Polanski agreed to a plea bargain; then, on the eve of being sentenced, the director drove to LAX and bought a one-way ticket to France. Polanski’s flight confirmed everything most people thought they knew about his degeneracy, and for those with a classical bent there also was about the episode an echo of Icarus, albeit in a plummet more lateral than vertical, what with Polanski’s ascent as a filmmaker having taken him farther and farther west, movies falling like so many feathers: the homegrown breakthrough of the Polish Knife in the Water in 1962; the consolidation of vision and acclaim with Repulsion, shot in Britain, in 1965; the blockbuster Rosemary’s Baby, set in New York, in 1968—until the trajectory reached Los Angeles in 1974 and the masterpiece of Chinatown, where Polanski ran out of geography, sunlight, and metaphor. What was left for him but to bite into paradise’s forbidden peach, barely ripe though it may have been, and consequently find himself flung back to the Old World, which long ago exhausted notions of sexual decorum, let alone utopia? Tellingly, the closer to utopia Polanski got, the darker the movies became, until personal corruption and social corruption became so indistinguishable that wise guy Nicholson, as a private eye who supposedly could tell Philip Marlowe a thing or two, was revealed as the naïf—the last time Nicholson was convincingly naive about anything.

Wanted and Desired isn’t particularly interested in understanding Polanski and certainly makes no apologies for him. It’s an investigation of Polanski’s crime and the subsequent spasms of a justice system that has its own confused agenda when it comes to celebrity. If Zenovich’s presentation of facts isn’t always as straightforward as the movie would have us believe—the photos we see of the 13-year-old victim in a Jacuzzi, for instance, are not those taken by Polanski, nor are they from the night in question, though the film implies otherwise—Wanted and Desired keeps its moral bearings anyway, thanks in part to not only the testimony on camera of the upright Mormon prosecutor bent on nailing Polanski but that of the victim, now in her early forties. Both have recently joined the growing chorus of those who, while not excusing Polanski’s original transgression for a moment, agree he got a raw deal from a duplicitous judge planning to renege on the terms of the plea bargain and throw the director behind bars well into the 21st century, and who moreover view Polanski’s decision to skip the continent as understandable and perhaps justifiable. If the facts don’t add up to refuge from responsibility but rather refuge from persecution, particularly for someone who was taught by the world to run ever since he was a kid, we might reasonably assume everything else we think we understand about him doesn’t necessarily add up either.

It would be silly to call Polanski a victim. Having to spend the rest of your life in Paris, with the means to do so, isn’t like being confined to Elba. But certainly an important artistic career at its Hollywood apex was diverted in another direction, and while the three-hour Tess was a modest hit and nominated for six Academy Awards, including Best Picture and Director, we’ll never know what a Polanski-directed Two Jakes might have looked like, not to mention, say, The Fugitive, a movie Polanski was born to direct if there ever was one. The triumph of his winter years, 2002’s The Pianist, cast the director’s haunted psyche in epic terms against the backdrop of the Warsaw ghetto, with the protagonist artist reduced to a primal desperation that is redeemed by the grace of his art even as it gives that art new meaning. Most striking about The Pianist is how detached it is, the winter gripping the filmmaker’s memory in a deep freeze as he dispassionately recounts nightmares of the SS flinging old Jews over balconies from wheelchairs. The movie has a stately classicism that surprised many for whom the inkblots of Polanski’s filmography suggest a wild man, but Polanski’s movies always have had about them a stateliness that considered suspect the flashier work of his era, the verve or creative joy that always has been just beyond Polanski. The last moments of Wanted and Desired find Polanski lionized and lauded with honors and Oscars, but the life of a man once described as “deep water pretending to be shallow” remains for most a case of what might have been, even if it is only to wonder, finally, what he might have been if he had been someone else.