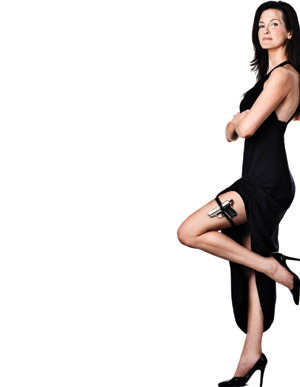 “Guys think it’s hilarious that I wore Angie’s bra.” Clarke had to don Jolie’s undergarment for a scene in Mr. & Mrs. Smith when her own was too revealing.

A body double substitutes during scenes in which the actor’s face is not visible, saving the production money. Clarke also works as a stand-in, running through the lead actor’s dialogue and cues so that the crew can adjust the lighting.

Born in Minnesota, Clarke, 33, appeared in a couple of small films there. “I thought, ‘This is so easy.’?” She moved to Los Angeles eight years ago to continue acting. “When you get here, you realize there are 5 million other people who look just like you.”

Clarke got her start as a double when, at the suggestion of a casting director, she sent her photo and measurements to Central Casting, one of the country’s biggest agencies for background actors, an Industry term that encompasses nonspeaking roles. At an interview for Jolie’s double in Mr. & Mrs. Smith, she beat out 25 other women for the job.

Auditions can be awkward. “Everyone comes in from different departments to look at you,” including the director, the director of photography, and hair, makeup, and wardrobe people. “They look at details like jawline, hairline, hands, legs. They also have you try on clothes to see how they fit.”

Among Clarke’s other assignments was subbing for Jolie in Taking Lives and for Kate Beckinsale in Vacancy. Often she can’t distinguish between herself and the actress when she watches the finished product. When she was on the set with Beckinsale, “they would say, ‘Hey, Kate,’ and we’d both turn. They named her Kate 1 and me Kate 2.”

Working out and eating right are part of the job. While Clarke used to have 11 percent body fat and bench-press 100 pounds, today her exercise regimen is limited to walking her dog, weight lifting, Pilates, and yoga. “Now I’d rather have a glass of wine than go to the gym.”

Clarke has worked as an aerobics instructor, a nurse, and a high school career coach. “I always thought I would get involved with a city council or the UN.”

Body doubles do not perform stunts; that task goes to a stunt double with specific training and insurance.

Her mother didn’t understand her desire to come to Los Angeles. “She told me normal people don’t do that. Now she thinks it’s great.”

A scene in Vacancy required Clarke to crawl through a tunnel with rats. “I didn’t even care. They were cute! I’m more of a tomboy anyway. I’d rather play in the dirt and climb a tree than put on makeup.”

The job commands a standard rate of $144 for eight hours, but that figure increases with overtime, mileage compensation, and special circumstances such as night shoots or wearing a wig. A typical workday is 12 hours and brings in $300.

Clarke also pursues acting and writing projects. She has appeared in several films, TV shows, and commercials. Still, “being Angie’s double has kind of overshadowed that.”