Home Uncategorized Behind the Curtain 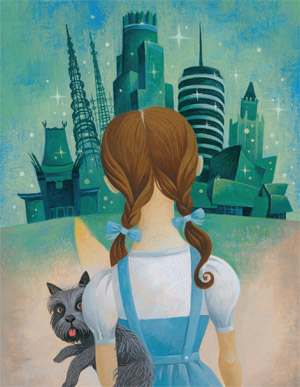 L. Frank Baum was born in New York’s Finger Lakes region five years before the Civil War began. When he shuffled off this mortal coil in 1919, a decade after building a dream home he called Ozcot in a hamlet named Hollywood, the author of The Wonderful Wizard of Oz was buried at a then-spanking-new Forest Lawn, where he belongs as not many Americans can be said to belong. Maybe you can’t see Disneyland from Glendale—or even pick out Steven Spielberg’s house, for all I know, not to mention wherever Pink lives. But nobody can see the Capitol, the White House, or the onetime HQ of the National Woman’s Party from Mount Vernon.

“Before Baum wrote the tale of Dorothy’s journey from Kansas to Oz and back again, it didn’t exist and America had no modern fairy tale of its own.” So Rebecca Loncraine declares early on in The Real Wizard of Oz: The Life and Times of L. Frank Baum (Goth-am, 416 pages, $28), and this shrewd writer probably knows she’ll trip readers up with that arresting word “modern.” Unless “Rip Van Winkle” counts, Baum’s native land hadn’t produced any resilient traditional fairy tales either, making his fluke achievement more remarkable. Unindebted to European models, its vital ingredients are as homely and ingenious as those of a cotton gin or, closer to Baum in time, Wilbur and Orville Wright’s flying machine.

One reason the comparison fits is that Baum obviously doesn’t qualify as capital-L Literature the way Lewis Carroll does. Like his nearest equivalent, Margaret Mitchell, he’s in the lesser but fascinating category of people whose contributions to a culture end up feeling like its primary texts precisely because they seem unmediated by art—or at least unshaped by a detectable artistic personality. That’s why a movie as great as Nosferatu doesn’t cast the elemental spell of King Kong.

No wonder that in Loncraine’s account, Baum’s life story reads more like an inventor’s than a writer’s—stimulated by gadgets and partial to all sorts of random if not addlepated activity until a eureka moment even he can’t account for. In boyhood his first tries at writing were prompted by the gift of a toy printing press; which was the chicken and which was the egg is anybody’s guess. He was stagestruck as well, leading to an early career as the manager and star of a touring company that performed in melodramas of Baum’s devising. He gave up the profession when a fire destroyed the elaborate props and illusion-making machinery that were his pride and joy.

The troupe’s Kansas gigs seem to have been the only time Baum set eyes on Dorothy’s future home. His own Great Plains stint came when he relocated his growing family in 1888 to the town of Aberdeen in the Dakota territories. After the failure of his first venture there—Baum’s Bazaar, a luxury emporium whose line of fripperies stopped selling at the first drought—he ended up running a weekly newspaper. That let him indulge his eccentric streak in ways both pleasant (an invented boardinghouse landlady voiced his casual opinions) and unpleasant. Not only did one editorial call for the “annihilation” of the Indians, but it was his singularly incoherent response to the massacre at Wounded Knee.

For Oz’s origins, however, we can thank Chicago, the Baum clan’s next residence and fortuitously the site of the 1893 World’s Fair. Packed with technological marvels, the fair’s fabled White City was so patently the inspiration for Baum’s emerald one that—in the first Oz book though not the sequels—Oz’s magical capital actually is white. Only the goggles the Wizard compels everyone to wear turn it green.

We can’t be sure whether Baum attended one of the fair’s intellectual sideshows: historian Frederick Jackson Turner’s lecture on the closing of the American frontier. Nonetheless, it does seem almost too perfect that The Wonderful Wizard of Oz came out in 1900—as good a chronological dividing line as any between the two versions of America that Baum’s “Kansas” and “Oz” stand for in our imagination. His fable’s durability is all in how easily nostalgia and futurism coexist.

The proof is that his sturdy heroine isn’t changed by her adventures in Modernland, reassuring us that we won’t—haven’t—either. As the world knows, it turns out she can always go home again if she wants to, although Baum eventually tired of manufacturing pretexts for her to return to Oz and settled not only her but, more piquantly, Aunt Em and Uncle Henry there for good. “Manufactured” is the right word, too: Along with a slew of other children’s books written under multiple pseudonyms, he churned out 13 sequels to The Wonderful Wizard of Oz, the last of which was published posthumously.

Big on primitive trick photography, the earliest movie versions of the Oz story are Baum’s as well, produced at the Santa Monica Boulevard studio that helped ruin him after he moved to Los Angeles in 1910—the same year, incidentally, as D.W. Griffith’s In Old California, the first film shot in Hollywood. It’s hardly surprising that Baum would be mesmerized by the new medium’s potential, and most of all by its gewgaws. Whenever the dreamer in him met the tinkerer, the tinkerer won.

He could hardly have predicted how completely the Oz books would be subsumed by one of the most beloved-and-then-some screen adaptations in movie history. Far more than is the case with Gone with the Wind, director Victor Fleming’s version confirmed the impression of a story without a creator. If MGM’s 1939 Wizard of Oz can be said to have an “author” at all, composer Harold Arlen and lyricist Yip Harburg come closest to fitting the bill, chiefly because it’s impossible to imagine the thing without their contribution.

The 40-year gap between book and film has thoroughly muddled whatever sense we might have of Baum’s original as an artifact dating to any particular era. Ironically, that’s no less true of the movie itself, considering that it didn’t get embedded in America’s consciousness until TV turned yearly viewings into a national ritual a generation after its release. By then Dorothy’s Kansas—was it Dust Bowl? turn-of-the-century? who could tell, really?—was more unreal to most viewers than Oz. For that matter, so was the idea that the actress who played her had ever been young. But this may be the one country where a stopped clock that’s sweet enough can be right 24/7.

What gets Loncraine excited, by contrast, is the challenge of reenvisioning The Wonderful Wizard of Oz as a product of specific circumstances—since Baum’s hither-and-yon CV mirrored his country’s prevailing manias in the superficially placid, sneakily transformative years between Lincoln’s assassination and the dawn of the century we’d end up naming after ourselves. Hers isn’t the only current book to tackle the job: Evan I. Schwartz’s Finding Oz (Houghton Mifflin Harcourt, 372 pages, $28) covers much of the same ground in occasionally fuller detail. The main reason to prefer Loncraine is that she’s both nimbler and more digressive.

Maybe because she’s a Brit and therefore as captivated by Kansas’s strangeness as she is by Oz’s, she takes readers down erratic but flavorful byways—spiritualism, infant mortality, women’s suffrage, and the advent of electric power and the telephone—that enrich her book’s subject even when the influence of at least some of them on Baum can’t help but be conjectural. For instance, Loncraine obviously can’t prove that the Tin Man has anything to do with the Civil War amputees who’d have been a common sight in Baum’s youth. A novelty, too, since veterans of earlier wars were seldom surgically maimed that way. Yet the association needn’t have been conscious on his part, and the image is evocative in its own right.

So are plenty of others here, and Loncraine can be mischievous about using our familiarity with Dorothy’s story to her advantage. She doesn’t have to spell out the connections to give us a tingle of anticipatory recognition at each of the real-world sources she’s turned up for Baum’s fantasy, from period anecdotes of vanishing balloonists to a letter from his sister-in-law that mentions a house blown away by a cyclone. Better yet, she’s got a knack for choosing the right detail to make routine observations sparkle. While she’s hardly the first to peg P.T. Barnum as the Wizard’s likeliest carnival prototype, I’m not sure I’d ever truly appreciated his prescient genius before learning that his pageant floats sometimes featured mirrors “so that stunned passersby could see their own distorted features grinning back at them” from a biblical or fairy-tale scene—as good a metaphor for pop culture as any.

In fact, the only thing Loncraine can’t do is make Baum himself interesting. Since Finding Oz has the same problem, we can guess where the blame lies. At best, he registers as a still-recognizable American type: one of those go-getting blends of self-confidence and dilettantism whose wayward imagination functions unburdened by introspection. In both accounts his sensibility doesn’t develop so much as it sits around waiting for one of its owner’s hobbies to hit pay dirt. In later years Baum grew fond of embroidering the conceit that Oz actually existed and he was only its historian, which at one level was just canny marketing to the kiddie audience he’d helped, er, invent. But as Loncraine points out, it was also a way of disclaiming authorship—and the shoe fits.

Whatever he was, a deliberate artist he wasn’t. If he had been, he’d probably have bungled the job of turning Huck Finn’s raft into a middle-class house at risk from cyclones—but that only deepens the mystery. After all, 27 million people visited the Chicago World’s Fair in 1893. Only one of them wrote The Wonderful Wizard of Oz, and Loncraine can’t tell us who he really was. My hunch is that Baum couldn’t have, either. This book’s lively portrait of the multiple real and fraudulent worlds vanishing and emerging around him as he set pencil to paper is the next best thing.