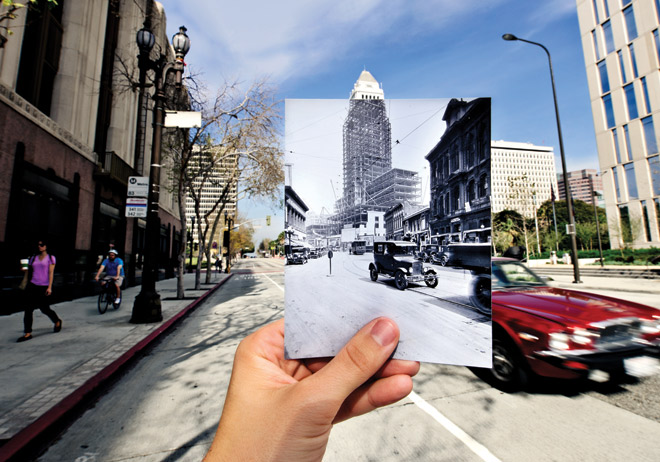 No matter the consequences, L.A. wanted a new City Hall. Buildings were condemned, office workers displaced, and streets realigned. A thousand people worked on the edifice. When the last girder was in place, the steel skeleton, pictured in 1927 at 1st and Spring streets, weighed 8,167 tons. Architects had fought for the privilege of designing the structure. John Parkinson, John C. Austin, and Albert C. Martin, a dream team noted for their individual works, won the contract and what was then a fat paycheck: $315,027. The iconic 28-story tower has been a backdrop for films and was even destroyed onscreen. Following real damage by earthquakes in 1987 and 1994, city officials called for seismic and cosmetic renovations. They were completed in 2001, and now City Hall can move 22 inches safely in any direction when the earth shake.

CityDig: Downtown’s Business District Gets Down to Business