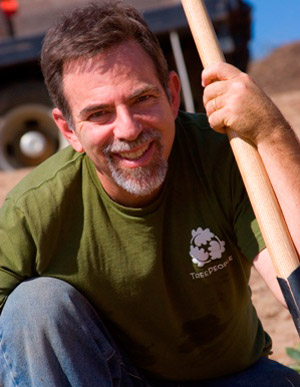 Long before eco-friendly products lined supermarket shelves and global warming was as widely accepted as the Big Bang Theory, Andy Lipkis was educating Angelenos about saving the environment, living sustainably, and the singular value of trees. In the 37 years since he founded the nonprofit TreePeople at 18, Lipkis and his staff have spearheaded the citizen forestry movement and helped bring about pioneering environmental initiatives, including planting more than 2 million trees in the L.A. area. Los Angeles magazine associate editor Sara Wilson recently sat down with Lipkis, who divides his time between his home in Venice and TreePeople’s 45-acre headquarters in Coldwater Canyon Park.

What does it mean to be an environmentalist today in L.A.?
I have never used that term to define myself.

Why?
Because everybody wants to categorize, and categorization is separation. That’s where everything starts breaking. We are humans. If you look in the dictionary at what is “heal,” one of the definitions is “repair the cycle where it’s broken.” That’s what it’s all about for me.

So how do we start to repair?
We inspire, engage, support people, and make a sustainable city. We are so far disconnected from nature and the cost of that disconnection to our health, our lives, our budget, our national security, especially in Los Angeles. Everything evolves from that lack of connection.

How do we reverse that?
We need to transform Los Angeles to what we call a Functioning Community Forest.

What’s that?
The forest ecosystem is the model of sustainability and health and safety and abundance. What Jared Diamond documented is that every civilization that forgot its trees began a process of collapse and disappearance. We tend to forget our trees because they silently do a shitload of life-support work, just like our moms, and we don’t take care of them. We let go and we lose everything, and ultimately they disappear.

So we’ve paved paradise. Now what?
It’s possible to design a landscape to function like a forest, where water is captured safely, filtered, and, if appropriate, put into the ground or a cistern. Basically every piece of property can be adjusted. So what we’re talking about instead of nuclear dams is fixing the homes on a neighborhood scale, on a community scale, where water can be captured on-site.

So the goal for you is to retrofit homes?
Yes, that’s the core. We shift the locus of control down to the home owners, the residents, the families.

Who will pay for all of this?
My vision is that we’re either going to invest billions in great infrastructure, no lasting jobs, short-term construction jobs, and a hemorrhage of cash, or we’re going to invest in human and natural capital. So we have a choice. Money’s gonna be spent anyhow. There’s a notion that environmental stuff is always going to cost more rather than the fact that it is actually cheaper when we look at the big picture.

So who is in charge?
Our mayor has very little power compared to New York, Chicago. The head of the Department of Water & Power has three bosses—the city council, the board, and the mayor. Who does he say no to or yes to?

So our leadership isn’t making a case for our environment because the forces against it are too politically inconvenient for them to make the case, or they don’t get it?
There’s so much hidden manipulation and lack of transparency.

By our leaders?
Yeah, and it might be that they’re protecting the union or protecting something they don’t want seen, and people are so profoundly distrustful now and unfortunately rightfully so. In every city there’s a very weird facility where a crack team of people gather whose purpose is to protect public health and safety. It’s called the Emergency Operations Center. FEMA requires it.

So what?
Well, the funny thing is what they’re missing: Last year 4,900 people in Southern California died from air pollution.

So those emergency bodies that were set up are just totally missing the point.
They are.

So how to remedy this?
By putting the right tree in the right place, [we can use trees as] acupuncture needles. For shade, for food, for energy conservation, for water. [We have a model that] calculates the cost and the benefits. We use it as an education tool to bring multiple agencies to the table. It shows $200 million in benefits, including nearly $200 million of water back in the ground.

So do we need a court order to get this implemented in L.A.?
I hope not. But you know, it [would] make a big difference on how quickly they move. Seattle is well on its way. They’re paying to put water cisterns in people’s homes. They’re giving incentives [so that people] can choose. [The idea is for] city, state, and federal resources to combine into an integrated channel that then helps people do the right thing.

What’s next for you?
I invented a tool called GoogleTrees, which helps you plan and guide all of this stuff and provides the incentives. Imagine if you were to go into Google Earth, pull down and open GoogleTrees, and up comes on your house or your business your palate of tools, only [it tells you] the soil under your site because of your address, because of the climate where you are.

When is that going to be up and running?
I’ve hired a firm to start doing the design. I’ve spent five years convincing Google that they should pay for it because I didn’t want to raise $10 million.

Are you worried about the future?
The thing that scares me is that in my lifetime, I’ve seen four [types] of environmental consciousness since the first Earth Day. Our literacy rises a little each time, but often it doesn’t ever rise enough because marketers come in, whether they’re political marketers or other people calling stuff green, and it’s not. And the cynicism rises to the point where people turn off. They’ve had it.

But don’t you think people are taking more responsibility for the environment now?
They are, and it’s really good. Now when I make presentations [to schoolkids], I don’t even tell them anything. I just ask them questions. They know the answers, but no one is connecting the dots for them.