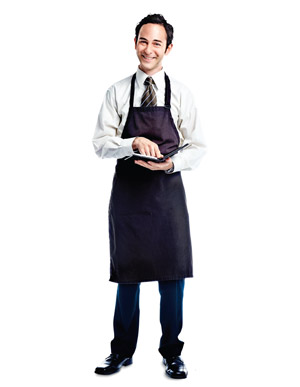 Longo began waiting tables in his hometown of Blaine, Minnesota, a decade ago at 16. He hasn’t stopped. Off the largesse of good tippers, he put himself through four years of theater and dance training at Minnesota’s Concordia College before relocating to New York, where he studied acting for another four years, waited tables in SoHo, and joined the off-off-Broadway cast of Waiting for Godot.

No one knows how many actors support themselves by reciting the evening’s specials, but under the listing of “actor” in the online Urban Dictionary is the definition “specific to Los Angeles, anyone who works as a bartender, waiter, or waitress.”

Longo arrived in L.A. in the summer of 2007 to pursue film and TV roles. After applying at 17 restaurants, he was offered jobs by 3. He chose West Hollywood’s BLT Steak, which draws a healthy customer base from the Industry. “I believe a lot of actors working as waiters bring their head shots to the job, but I think that does you a great disservice.” Still, he is very aware of who might show up in the restaurant on any given night. “We Google every name on the reservation list. If a casting director is in my section, I’ll be friendly to them on the chance that they may one day ask, ‘Do I know you?’?” So far, no casting director has asked Longo “Do I know you from BLT Steak?”

Two weeks after settling in L.A., Longo was cast as an amateur pickup artist in Still Waiting, the sequel to Waiting, a movie about waiter shenanigans at a restaurant appropriately named Shenaniganz. A week later he was cast as a waiter on Gordon Ramsay’s restaurant reality show Hell’s Kitchen—a role he went on to “play” for four seasons. “I can’t escape this job,” he says.

Brad Pitt’s (No Man’s Land) and Steve Martin’s (The Absent-Minded Waiter) first film roles were as waiters. Neither, however, has opened his own establishment, though other actors have, including Robert De Niro and Christopher Walken (Ago), Cathy Moriarty (Mulberry Street Pizzeria), Eva Longoria Parker (Beso), Jennifer Lopez (the now-defunct Madre’s), and Arnold Schwarzenegger (the since-terminated Schatzi on Main).

“Acting, you can make more money. But in reality, on a month-to-month basis, you make a better living as a waiter.” While Longo is not comfortable disclosing his salary, full-time waiters at high-end restaurants in Los Angeles earn $1,000 a week on average, including tips.

Longo’s best tip was $1,500 for a $3,000 meal—but he only got to keep a small portion of it because the restaurant pools its tips.

Gordon Ramsay, says Longo, “kind of scared me at the beginning, but I didn’t mess up the courses and he didn’t call me a donkey, so that was good.”

“The only thing that would make me quit waiting tables is winning the lottery. It’s the most flexible and lucrative job an actor can have while auditioning and waiting for his break.” Longo is in good company. Kevin Bacon waited tables for at least two years before his big break, a role in Guiding Light.