Home Uncategorized A Day at the Office with Amy Ryan 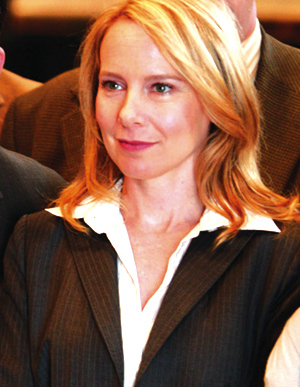 The Dunder Mifflin transport truck is backed into a warehouse on a Universal film lot in Van Nuys. From 50 feet away one can just make out Amy Ryan’s profile and blond, chin-length hair in the cab’s passenger seat. Behind the wheel Steve Carell, who plays Michael, the catastrophically insensitive and out-of-touch boss on NBC’s hit comedy The Office, talks into a CB radio and makes hissing epiglottal sounds to simulate transmission static. Even from a scarcely audible distance he’s hysterical, so—no surprise—the other sound emanating from the open window is Ryan busting up laughing.

She doesn’t give us much opportunity to notice, but Amy Ryan has a great laugh, deep and burnished and easily summoned. There was little place for it in Gone Baby Gone, the Ben Affleck-directed movie she starred in last year. As Helene, a low-rent cokehead in a tube top, Ryan is at once loathsome and heart wrenching, a woman whose attempt at double-crossing her dealer leads to the kidnapping of her baby girl. Helene’s one-syllable laugh is more like a bark, the sound of a person going nowhere, but Ryan’s portrayal resulted in critics’ awards from here to New York as well as Golden Globe and Oscar nominations. At the height of all the hoopla, when Ryan could have taken advantage of the attention to ask for just about anything, she told her agent, “You know what job I want? I want to be on The Office.”

Based on Ricky Gervais’s British comedy series, the American version of The Office survived initial “Copycat!” digs to become a multiple Emmy winner and one of television’s top-rated comedies. Its disaffected, cubicle-tethered office workers in the employ of Dunder Mifflin, a paper products company, deadpan directly to the camera about the unparalleled tolerance required to work for their socially obtuse boss. Ryan made her debut in last season’s finale as Holly, the new HR representative in Dunder Mifflin’s Scranton branch. “I still have the phone message from my niece,” she says. “?‘Auntie, your show was on tonight. I just want to know, is it appropriate?’ It’s the first thing I’ve been in that she can see. Finally I’m in something appropriate.”

The minute the CB scene is finished, Ryan, wearing a trench coat over a black blouse-and-skirt ensemble, climbs down from the cab and trades her high-heeled patent slingbacks for a pair of bright orange flip-flops. She and Carell worked together in last year’s Dan in Real Life, although Ryan is mostly glimpsed in the distant background bouncing a child on her hip while Carell gets all the action. When it’s mentioned that they didn’t really have any scenes together, they dissolve into laughter and start talking in a shorthand so short, it’s like code.

Carell: That’s a very nice way of putting it.

Ryan: We made up our own scenes.

Carell: Our own back stories.

Ryan: All delivered in one word: “Hello.”

They’re chortling now, a common occurrence—and a danger when the Office cameras are rolling. “With all the group scenes, even if most of the actors don’t have the bulk of lines, they’re listening,” says Ryan. “They’re all really sharp, so someone will throw in an improv when you’re not expecting it, and when one person cracks up, it sets off the chain. You really don’t want to be the first to go. A few times I’ve laughed so hard, I’m bawling. It’s just so silly.”

Silly’s been a nice break after playing Beadie Russell, a policewoman coming upon a ghastly crime on HBO’s The Wire, and Ethan Hawke’s exasperated, laundry-folding ex-wife in Sidney Lumet’s Before the Devil Knows You’re Dead. This month, as her Office arc airs, Ryan will also be seen in Changeling, directed by Clint Eastwood. “It’s really dark,” she says of her role, a sane woman trapped in a psychiatric ward alongside Angelina Jolie. “It’s Angie’s movie—I’m a flavor in the soup. She was incredible at being gracious while staying private and focused. I don’t mind not being glamorous in a role, because the truth of a situation is where the beauty lies. But being like that next to Angelina Jolie—oh man. She’s in distress, too, but she looks beautiful!” Eastwood’s directing style provided a different sort of confrontation. “As everyone knows, Clint moves fast,” says Ryan. “Two takes, tops. Either you panic or it gives you confidence because you think, ‘Well, I was the one he chose, so I guess this is what he wants.’ He trusts you so much to bring it to the table yourself.”

Ryan, who is 38, began acting as a child in Queens. “I’d put on plays in the backyard and tell the kids in the neighborhood they had to audition,” she says. “They’d say, ‘Hell, no,’ and I’d say, ‘OK, you can be in it.’?” Her mom gave up her nursing job to help her dad run a small trucking business. Amy went to Manhattan’s High School of the Performing Arts and, in the best tradition, got her TV start on the soap As the World Turns. After years of guest spots—ER, Chicago Hope, Law and Order: SVU—she landed her first series, Lumet’s critically acclaimed 100 Centre Street. All along she worked in theater, as she continues to do today. Her portrayals of Stella in A Streetcar Named Desire and Sonya in Uncle Vanya earned her Tony nominations, but Hollywood was harder to win over. In You Can Count on Me, the 2000 indie film starring Laura Linney and Mark Ruffalo, she got off one sentence in the first scene before screech, she was a road crash statistic. In Albert Brooks’s Finding Comedy in the Muslim World, she had a few minutes’ screen time, mostly spent buoying her husband (Brooks) on the telephone. “Unfortunately,” she says, “that was one of those jobs where they said, ‘The movie’s filming in India and L.A.! You’ll be in L.A.’ ” In Capote, she had a little more room to move as the starstruck wife of Alvin Dewey, the detective played by Chris Cooper, but it was Helene’s desperate bravado in Gone Baby Gone, opposite Casey Affleck, Morgan Freeman, and Ed Harris, that grabbed audiences by the throat.

While the Office crew readies a shot, Ryan conducts a tour of the main set, where the nose-to-nose desks familiar to 8 million weekly viewers are cluttered with canisters of pens, framed photos of family members, and personalized doodads like the paper clip aircraft made by Ed Helms’s Andy. All the computers are wired, so when you see John Krasinski’s Jim typing away, he’s likely sending an e-mail or surfing the Net. Kate Flannery’s Meredith has a pint of vodka in her top drawer. Holly’s desk, facing a wall in a separate, windowless room, has already been stripped of effects. “So sad,” says Ryan, who has only a few days left of shooting.

Well, not so sad, considering that her next movie (thank you, Mr. Affleck) is with Matt Damon. “Do you see me blushing?” she asks. The Green Zone, based on Washington Post journalist Rajiv Chandrasekaran’s book Imperial Life in the Emerald City and due for release next year, was filmed on an army base in Spain, where the arid landscape stood in for Iraq. Ryan plays a Wall Street Journal reporter trailing a pair of CIA agents (Damon and Greg Kinnear) who are looking for weapons of mass destruction. Chandrasekaran and military consultants helped the actors with verisimilitude, and Ryan sought out research on her own. “It’s great when you actually learn a thing or two on the job,” she says.

What she calls the “high jinks and shenanigans” of The Office have their appeal as well, and Ryan, who enjoyed her 4:30 a.m. drives over a foggy Coldwater Canyon from the Four Seasons, is clearly a favorite with her cast mates. “It would be so easy to be facetious,” says Carell, who is protecting his makeup from the 90-degree heat by holding a fat iPod-shaped fan under his chin. “But it’s been such an utter and complete honor working with Amy. Her ears must be burning all day.”