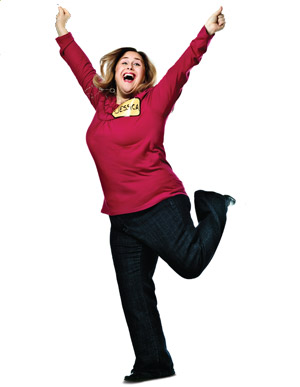 » “I had never won anything in my whole life before. Never.”

» Sinclitico had tried out for game shows before—Match Game, The Weakest Link—and had even lined up for The Price Is Right, though she’d never made it on the air. After her daughter was born last year, Sinclitico and her sister (once a contestant on Wipeout) decided they needed some bonding time, so Molly got tickets.

» For two weeks Sinclitico watched “every episode of The Price Is Right I could get my hands on” and took notes on the players, games, and prizes.

» Her passion for games could be genetic. “Every year my family has a cutthroat, take-no-prisoners round of Christmas bingo. It’s all very serious business.”

» The sisters arrived at CBS Television City at 7 a.m. in July, hoping to score a seat for the 10 a.m. taping of the show (even with tickets, seats aren’t guaranteed), but the studio was filled with people who’d been gathering since 4:30 a.m. The pair had to wait seven hours for the next taping.

» Producers trawl the crowd for contestants. “They want people who are going to enjoy themselves, not twiddle their thumbs,” so Sinclitico and her sister wore homemade T-shirts featuring images of host Drew Carey and bumped hips enthusiastically.

» While Sinclitico doesn’t remember hearing announcer Rich Fields call her name and say “Come on down!,” she does recollect the excitement of the moment. “I felt like I was winning an Academy Award.”

» After making the closest guess of the price of the opening item (a $2,400 Raymond Weil watch she thought cost $1,300), Sinclitico won a chance to play “Half Off” for a handful of household objects and $10,000. When it was time to pick which box held the money, she chose number 6, despite yells from the audience telling her to pick 15. “Six has always been a lucky number for me. I just went with my gut.”

» When Sinclitico won, the studio went crazy, fake money spilled out, and a sign flashed “$10,000.” “I just stood there. I didn’t know what to do, and it occurred to me to grab some money and throw it around.”

» Then Sinclitico returned to the stage to spin the “Showcase Showdown” wheel for a chance at more lavish prizes. “The wheel is very, very heavy. I was thinking, ‘OK, just don’t fall on national television.’?” She spun 80 cents—not high enough to qualify.

» Sinclitico, who lives in Culver City, will put her winnings ($11,000 before taxes) toward bills and a family trip to Hawaii. She also took home an iron, a blender, a video game, a salad dressing maker, and the diamond-encrusted watch, which doesn’t get much use. “Today I went to a play group, and I made strained prunes. A fancy watch doesn’t really lend itself to that.”

» “They say everybody has their 15 minutes of fame, and mine was literally 15 minutes, from start to finish. That was it.”