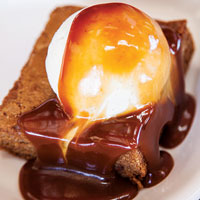 Good things happen when a Michelin-starred chef turns his attention to the food of the hoi polloi. Michael Cimarusti salutes the sea’s inherent elegance at Providence (#3), but here it’s the rustic charm of fried clam bellies and a loaded lobster roll that have New En-gland transplants (including the chef) feeling homesick. A 14-pound lobster stares you down from the tank beside the raw bar, where a tatted-up crew lops the spines off sea urchins and shucks oysters from both coasts. That’s linguiça heating up a Portuguese fish stew and house-smoked albacore beneath a pile of arugula. But Cimarusti knows better than anyone that sometimes the best way to prepare fish is to just grill it, then drizzle it with herb oil and lemon.