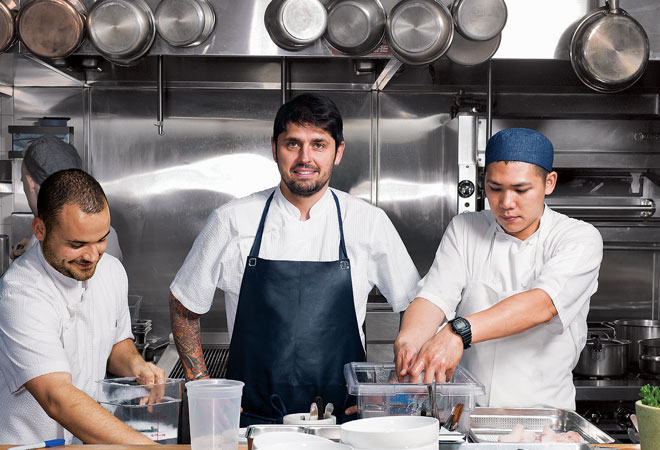 A wood counter holds eight diners; behind that are three tables. It’s an ambitious vision whittled down to 26 seats in a repurposed pizza parlor whose sign still flashes outside. Accessed by tickets purchased in advance, Trois Mec is a restaurant of modulated grandeur and uncompromising standards. When he was 14, Ludovic Lefebvre apprenticed with Marc Meneau in Burgundy, and his cooking is as rooted in that region as it is open to the world. With Prince cooing “Little Red Corvette” on the sound system, he grates Salers cheese onto potato pulp with onion soubise, allowing the cheese’s elusive notes of dried mountain herbs to interweave with the umami of bonito flakes. Cooked over almond wood, ibérico pork reaches rustic heights when accompanied by a few clams in a mustard-laced broth. Opinions are strong here (nothing but Gallic wines on the list), but the tiny spot serves as a model for modern luxury, with no distance between diner and craft.