Home Travel There’s a $99 Flight from L.A. to Iceland and Here’s Exactly What... 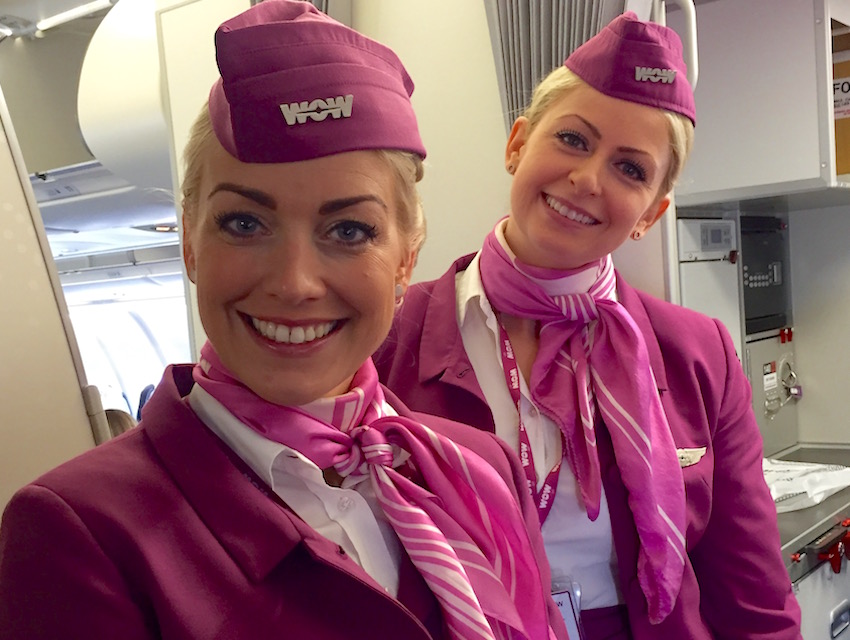 A nine-hour direct flight in coach sounds like hell on wings to me. I’m not spoiled—I’ve only flown business class once in my life, to Amsterdam on a new Dreamliner aircraft, which was truly a dream.  Private pods, welcome gifts in reusable clutch purses, warm towels and food, pillows and eye masks, all the gin I could drink. But in reality, I’m a first-class girl with a coach budget and usually fly airlines like Southwest. It’s easy, cheap and gets you from point A to point B pretty seamlessly and efficiently. Layovers are their own ring of hell, but sometimes they’re a necessity. But you do what you gotta do when you don’t have a huge travel budget.

So when I was invited to hop on the inaugural flight of Iceland’s WOW Air from LAX to Keflavik International Airport, near Reykjavik, I said yes—I’m not stupid —but I did give pause. WOW is a fairly new airline that just started flying direct from L.A. and San Francisco to Iceland. The whole schtick is cheap prices, and I mean super cheap, like as low as $99 one way. To put it in context, that’s cheaper than a flight to Vegas.

Naturally, when the airline first announced the flight, they sold out faster than you can say Eyjafjallajökull. You can still find the $99 one way—and that’s only one-way from L.A. to Iceland as it costs more to come back—but they go super fast. There are deals on the website now starting around $199, which is still insane when you think about it.

But is saving a few bucks worth your comfort? What extras are added on? Do you really have to pay for your own water? What the heck is a flatkaka med hangikjöti anyway? I found out for you.

Nobody Knows Where WOW Air Is This being the first flight from LAX, my Uber driver had no idea what WOW Air was or where it was located. When we finally fought the most brutal traffic getting into the terminals, there was an electronic sign saying “WOW AIR TBIT.” Great. Only the official WOW Air sign outside put me a few doors away from the check-in counter. Fine. There would be a lot of sitting in my future, so a few extra steps wouldn’t hurt now. And thanks to the bright purple branding on everything from the signage to the flight attendant uniforms, you can’t miss the counter.

You Have to Pay For Every Bag—Even Your Purse $99 one-way is great and all, but like most airlines these days, here’s where it all starts to add up: Baggage. You get one carry-on bag for free (that’s including your purse, ladies) so long as it weighs 11 pounds or under. After that, it starts at $39 per bag, and $48 at the counter. For checked luggage, one bag (max 44 pounds) will cost you around $58 online or $76 at the gate. Emotional baggage, per usual, is free.  I’m not sure if it was because this was the inaugural flight or if my small group was invited, but no one weighed my carry-on luggage. Good thing, too, because it felt like it weighed 80 pounds. I’ve heard various stories where some counters are more diligent than others, so next time, leave the lava rocks at home and travel light or pay up.

Basic boarding at LAX: They call chunks of rows to board at one time, starting from the front back. At Keflavik, it was more of a free-for-all. And who’s taking these cheap flights? This guy above, for one (to be fair, there was a big music festival, Secret Solsctice, happening in Reykjavik that weekend…I took him to be an international DJ). Otherwise, it was a lot of young people, a few older people, an occasional kid or two. Typical, but I thought the crowd skewed young. Millennials, take note.

This being the first WOW flight from LAX to Iceland, the owner of the airline was at our gate along with city and airport officials, and they all had so many things to sa…hey, look, cake!

Neckerchiefs Are Only One Reason the Flight Attendants Are Amazing The buns on the flight attendants are on point. And their perfect make-up will make any air-weary traveler feel pretty shitty after more than eight hours in the air. But damn they are nice. Super accommodating at every juncture, from helping you find a seat to serving drinks and sandwiches from the carts. I even witnessed a pretty elaborate jewelry sale, like an in-air duty free shop, across the aisle on the flight back.

The Puke Bags Have Attitude With its schticky mottos everywhere — “Honk if you’re hungry” for the flight attendant call button; “All the cool kids sit in the back” in the last row of the plane; “Hi, I am your seat!” on the headrests; and the “Vomit-meter” barf bags — I felt like I was on a Southwest flight with a little more room, brighter colors and blonder hair. Instagram bait? Yes.

The Seating Situation Is Totally Reasonable Expecting the worst for $99-$199 one way, I was pleasantly surprised by the plane. WOW is using new Airbus A330-300 aircraft for the West Coast flights, which are clean, wide, and comfortable. All seats are economy—no, guy behind me thinking they’ll bump you to “first class,” there is no first or business class—but you can upgrade for a bit more legroom. Pay to choose your seat at booking, or let the airline do it for you. But if you want extra legroom, or to sit in one of the very coveted front rows in the front, middle or back of the plane, do it ahead of time. To choose any seat online, it’s around $12; to upgrade to XL, or 34-inches of legroom, it starts at $49; and for those super room seats, prices start at $58. Prices are higher at the gate.

My group all had seats with extra legroom, which made a difference. I don’t care what anyone who didn’t get the upgrade says. There’s also a lot of room around the plane to stand and stretch, whether you’re waiting for the bathroom or not. Air yoga is real, y’all. Because this is base-model flying, there is no entertainment, not even Wi-Fi. But there are outlets for electronics between each seat, so download a bunch of movies and make the most of it. Sisters Tina Fey and Amy Poehler kept me well occupied for a couple of hours during one stretch, with some podcasts in between. That no Wi-Fi thing? They actually promote it as a “digital detox.” Um…yeah. I would’ve rather have used some of my time to catch up on work so I could enjoy my soak in Iceland’s Blue Lagoon without any worries.

One in-flight amenity is renting a purple-colored iPad pre-loaded with movies for $16. The only thing is, the movies aren’t exactly the most current, with 22 Jump Street, Guardians of the Galaxy, and the latest James Bond being the most recent. But, hey, when’s the last time you saw Four Weddings and a Funeral anyway?

There’s A Björk Drink, Of Course Nothing in life is free, and neither is anything on a WOW aircraft. You pay for water and all drinks; there are no mini bags of peanuts to hold you over. If you want to eat and drink on the flight, have your credit card handy and be prepared to spend it on everything from ham and cheese sandwiches to Björk. Not the singer; the birch-flavored Icelandic liqueur. Björk apparently means “birch” in Icelandic, and there’s an actual birch twig in the little bottle. Taste? Sweet like a liqueur with a very subtle spruce-y, pine-needle, minty flavor. Prices vary from around $2.50 for soft drinks and bottled water to about $11 for a turkey sandwich with chocolate-covered licorice candy bar, and Icelandic treat, on the side. All prices in my magazine were listed in Krona, but any dork will have a money converter app on their phone (guilty).

Menus vary whether you’re traveling to or from L.A. to Keflavik airport. The ham and cheese from L.A., for instance, was a giant sandwich with thick slabs of meat and cheese on a thick roll. Good? I devoured it due to extreme hunger. I would’ve eaten moss, I was so hungry. But that would come later. On the flight from Iceland to L.A., the ham and cheese baguette came warm and gooey. Way tastier. They also have more Icelandic specialties going back to L.A., like flatkaka med hangikjöti, or a smoked lamb and butter sandwich on flatbread (here’s the moss — it’s in the flatbread). Pro tip: Order food early in the flight or else you’ll get stuck with dregs later. After five or six hours in the air on the way back to L.A., and the fact that everyone’s food and drink was comped due to an excruciating 12-hour delay at the Keflavik airport, there was nothing left but cups of dehydrated cous-cous and lentils, chicken soup and random candy bars for breakfast. Damn you smart people who got the Skyr yogurt and the good OmNom chocolate bars before I did. Damn you.

Keflavik Airport Has A Viking Store Although it’s Iceland’s only international airport, Keflavik is very pretty and somewhat small. I noticed some quotes from Björk (the singer this time), among others, along the walls and windows. Cool design, decent food, and plenty of viking gifts, including hats, at the Icelandic Store. Upon arrival, the thing to do is to hit duty-free while waiting for your luggage. Alcohol isn’t cheap in Iceland, so everyone stocks up at the duty-free store before heading home, to their Airbnb, hotel or hostel. I even spotted WOW owner Skúli Mogensen filling a cart with beer and booze.

Painless flight, clean aircraft, lovely attendants—totally worth $99 and more. Even with add-ons it’s still relatively inexpensive to travel to Iceland and Europe. WOW also flies to Paris, London, Berlin, Amsterdam and more, encouraging stopovers (they aren’t free anymore, but they aren’t super expensive). Right now, I found a flight from LAX to Iceland and Paris and back again for less than what it costs to go from Burbank to Ohio. Iceland, I promise you, is much nicer than Cleveland, especially this time of year. Tourists are almost outnumbering the locals at this point, but most (we did have a bitter cab driver one night) welcome it. Plus, the midnight sun is truly glorious. PS: That duty free came in handy when we had that half-day layover on the way back to L.A. Due to some problems at London’s Gatwick airport, our delay went from three hours, to five, and eventually almost 13 hours. According to a quick search on Google, this is not unheard of with WOW. Reps say: “Layovers and delays are all circumstantial and depend a lot on airports and weather. WOW air has been the most punctual airline in Iceland since the airline started in 2012.” That’s funny because there’s a saying in Iceland about Icelanders being persistently late. Still, the layover was a total drag for just about everyone involved. People joining our flight as a connector got vouchers as an apology, but some found out they didn’t work on booze or food on the plane (moot since the airline comped everyone’s food), but only for goods at the airport.

By hour eight at Keflavik, I got us a bottle of gin from the duty-free shop, some sparkling waters from a cafe, found some ice (surprisingly difficult in place with ‘ice’ in the name), and played bartender in a corner we commandeered for the day. By the time we were ready to board, the bottle was gone. At least we slept well for most of that 8.5 hours back.