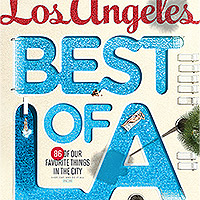 From the stone fruit saturated in sunshine at the local farmers’ market to the travertine flanks of the Getty Center spotlighted in a rising moon, L.A. does not lack for stimuli. It would probably take two lifetimes to savor the tastes of the countries that have exported their national cuisines here. Then there is the laughter, shouting, horn blaring, and engine revving that I absorb from my office, ten stories above Wilshire Boulevard. They are the sounds of a million intersecting lives…Read

Best of LA
Whether it’s housewarming gifts or house-cured meats, we did the picking for you

Saturday Night
For some, it’s the wildest night of the week. For others, it’s another punch of the clock. Our team of photographers fanned out to capture Angelenos doing what they do in a portfolio as wide-ranging as L.A. itself

CityThink
Why late summer is Sriracha’s hottest season; screaming good-bye to Magic Mountain’s Colossus PLUS: How we think at the Hollywood Bowl

L.A. Story
Fred Savage on his other wonder years

The Seen
The men who are going for gold

How L.A. Works
In the glow of the klieg light

Time Frame
Coming under fire in a Roger Corman film

The Guide
30 things to do this month, from petting sharks to sipping tea to digging in the mud PLUS: A preview of the music acts on board for Echo Park Rising and the FYF Fest

Open City
By Anne Taylor Fleming
After losing faith in the VA, a wounded warrior turns to alternative healing arts

Film
By Steve Erickson
With a recent string of back-to-back roles, Scarlett Johansson is as puzzling as ever

Well-Being
By David Hochman
Finding quiet amid L.A.’s din of traffic, leaf blowers, and helicopers will benefit more than your ears

Culture
By Fiona Ng
Rather than wait for galleries to show their work, L.A. artists form institutions of their own